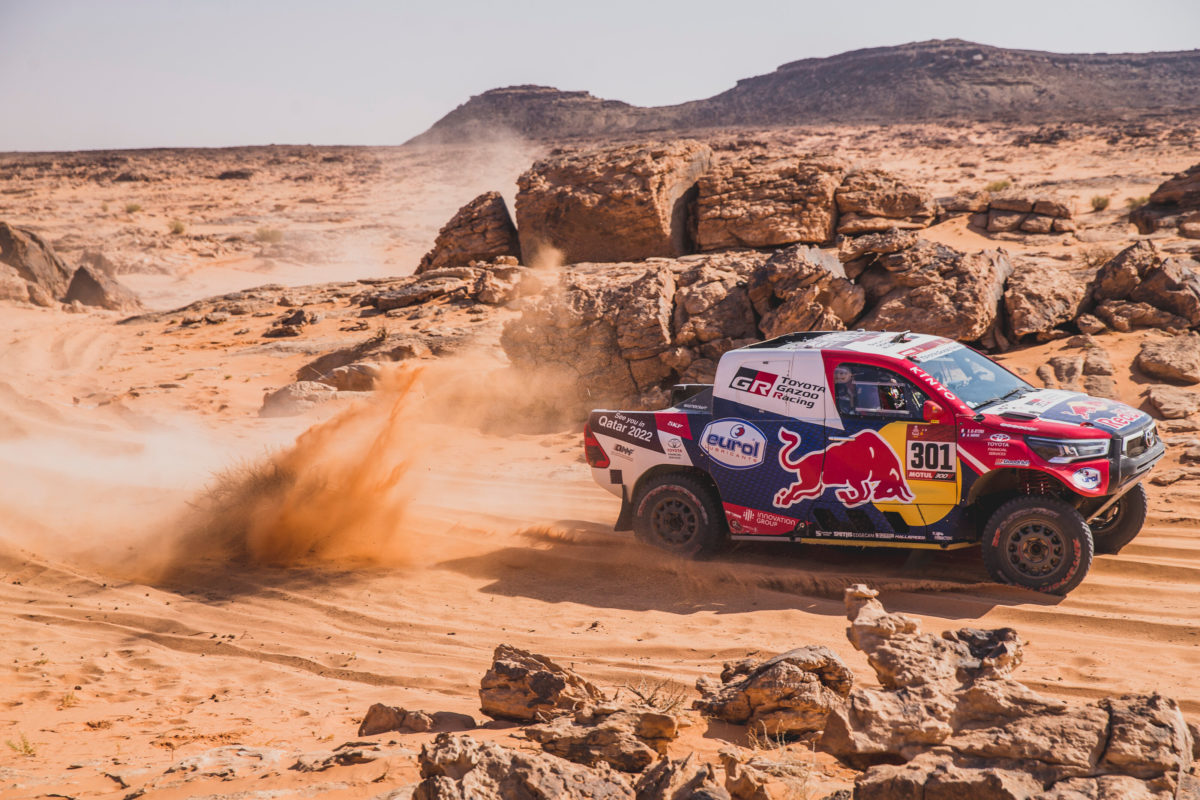 Nasser Al-Attiyah has made just over three minutes on Stephane Peterhansel’s Dakar lead with victory on Stage 8.

The Toyota Gazoo Hilux driver prevailed by 52 seconds over Carlos Sainz on the second marathon stage, between Sakaka and Neom, with Peterhansel 3:03s off the pace in the other X-Raid Mini JCW buggy.

With that, Peterhansel’s margin in the general classification is now 5:50s over Al-Attiyah, while Sainz sits third at 39:55s back.

The latest, 375km special was a close-run thing and no more than 1:24s covered the aforementioned trio for the first 266km, even if Sainz never led at any waypoint.

“Today we started second and after a few kilometres we were opening the way for the cars,” said Peterhansel.

“I have to say that in the last 50 kilometres, I made one or two mistakes. I didn’t follow the information from my co-pilot Edouard and we ended up turning round and round a little bit. We lost probably one or two minutes.

“For the moment, it’s just a small one. I hope that it will be the only one until the end.”

After what was his 40th Dakar stage win, Al-Attiyah remarked, “I’m really quite happy; my car is in one piece after yesterday and today.

“In some places we really pushed a lot just to keep pace with the buggies. It’s not easy, but I’m quite happy to finish the marathon stage.

“Today, Stage 8 was a great stage for us. We put three minutes into Stéphane, so, yeah, I’m really quite happy.”

The rest of the overall top five positions were also unchanged, although Jakub Przygonski (Orlen Hilux Overdrive) is now 1:39:08s in arrears and Nani Roma more than 40 minutes further behind.

The nine-time World Rally Champion started the second marathon stage with just the one spare tyre before copping two punctures in the first 80km, and his designated assistance truck had also struck mechanical trouble.

After incurring three punctures on the first stage alone, a broken suspension arm on Stage 6, and a broken hub on Stage 7, Loeb and co-driver Daniel Elena have finally withdrawn.

Dmitry Sotnikov’s overall lead is 43:28s from Stage 8 winner Anton Shibalov and Airat Mardeev, while Ales Loprais (Instaforex Loprais Praga) is 1:29:11s off the pace in the first of the non-Kamaz entries.

As in Quads a day earlier, the man who was holding sway in Lightweight Vehicles and SSV, Aron Domzala (Monster Energy Can-Am), was dealt a major blow due to a mechanical issue.

Domzala, unlike Nicolas Cavigliasso, is still alive in the event but is now more than half an hour away from new pace-setter, Austin Jones (Monster Energy Can-Am).