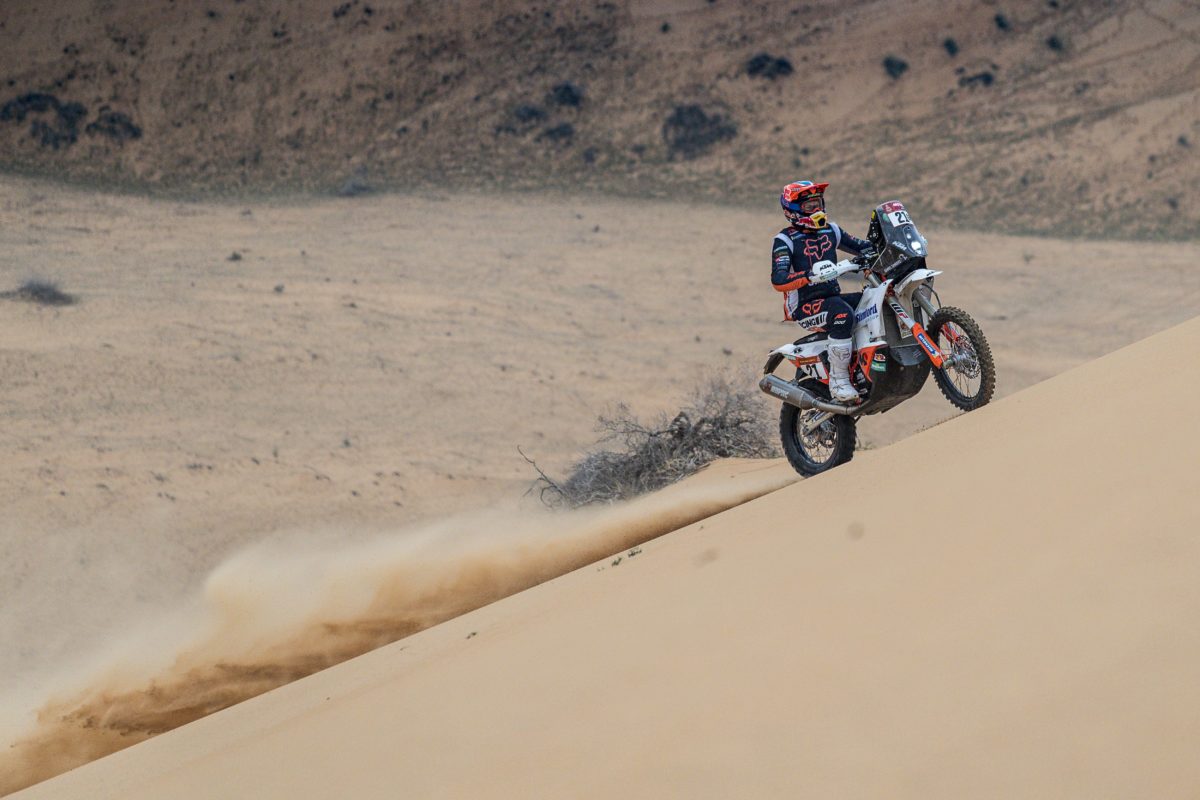 Daniel Sanders has revealed that he went flying head-first into a dune on an otherwise productive Stage 7 of Dakar 2021.

The rookie KTM Factory Team rider is into the top 10 in the general classification, ninth overall, for the first time since the Prologue after finishing fifth-fastest on the first leg of the marathon stage.

Having been third-quickest in the last hit-out before the rest day, Sanders was ahead in road order for much of the latest, 453km special and dropped no lower than seventh at any waypoint along the journey from Ha’il to Sakaka.

He did, however, have a sizeable spill around 100km from the end of competitive running.

“I was having a pretty good day today until I had about 100km to go,” said Sanders.

“I had been leading out a lot of the stage and was first to one big dune.

“I knew I had to turn left off the dune and go off piste, but I managed to hit a rock hidden in the sand with my front wheel and it just threw me straight off.

“I was going pretty fast and I just flew off and went head-first into the dune.

“Ricky [Brabec] stopped, which was good of him, and after rolling around winded for a bit I was OK.

“I damaged the bike a little – bent the front wheel and bars, but it was OK. Luckily, I was able to charge on to the finish.

“I’ll go over the bike and try and straighten it out for tomorrow and then I might need to get a couple of stitches myself.”

The pair made for an Australian one-two at Kilometre 63 and Price continued to lead until Kilometre 242, after which he ultimately dropped to seventh for the day.

Despite going from overall lead to trailing Jose Ignacio Cornejo Florimo by the slimmest of margins, the two-time Dakar champion was very pleased with his showing.

“I just tried to manage the stage as best as I could and not make any huge mistakes.

“It’s been a tough day but I’m happy with how things have gone, and it looks like we’re in good shape for tomorrow.

Stage 8, which will also fall under marathon stage conditions, ends in Neom after 709km, of which 375km is special stage running.