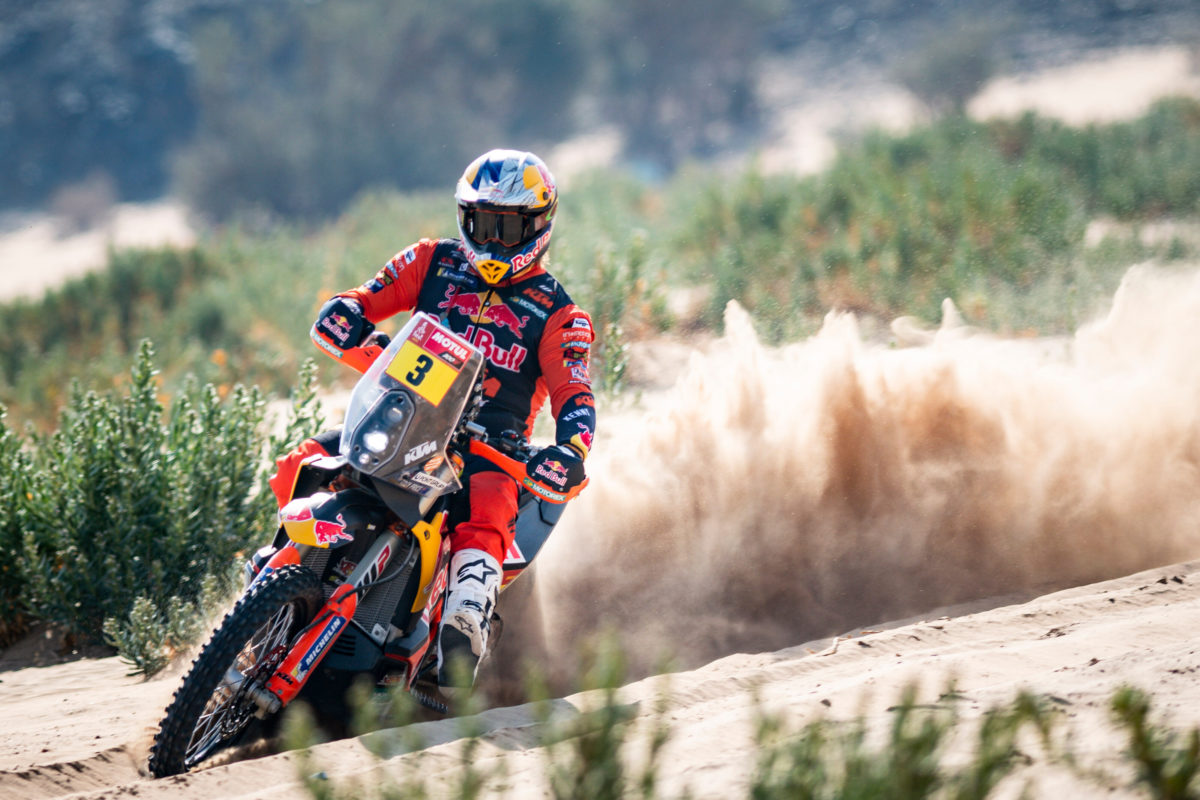 KTM Rally Team Manager Jordi Viladoms says he is feeling “completely different” to how he did at the halfway point of last year’s Dakar Rally.

While the KTM factory riders have hardly had an untroubled first six stages of the 2021 event, Toby Price is back in the lead and Sam Sunderland is less than five minutes off the pace in sixth spot.

In 2020, Honda’s Ricky Brabec had extended his lead to over 20 minutes immediately before the rest day, when Price’s hopes were hurt badly by a rear tyre problem.

Brabec would go on to win the Dakar for the first time, snapping KTM’s 18-year streak, while Price was the Austrian marque’s best on third all told.

“I am really happy with the whole team and right now, on the rest day, my feelings compared to last year are completely different,” said Viladoms.

“The riders are all in good shape, the bike is working well, and the team is doing an amazing job.

“Looking ahead to next week, it’s difficult to predict what each stage will be like, but for sure, there will be some very challenging stages ahead of us.

“We know anything can happen, but we’re still in the fight and I know the whole team will do their very best over the next week.”

Dakar 2021 has seen some wild swings in the general classification from day to day due to the greater navigational challenge combined with the effect of the road order.

Price, who had predicted such drama, said after Stage 6 that his physical fitness was more important than holding top spot at that point.

“Right from the start it’s been hard to predict the stages that will be difficult and the ones that won’t, and then to work out which stages to try and open and perhaps what stages are best to start from behind,” commented Viladoms.

“Of course, we set out to use some strategy and thankfully that has worked out so far.

“We have been lucky that on the whole things have worked out well for us as there has been some very tricky navigation in some of the stages, but our riders have all performed excellently and delivered strong results where it counts.

“There are many riders who are capable of setting a strong pace and even winning stages, so the swings in the results have been quite big this year.

“Despite that, now, at the halfway stage, the overall standings are very close, and it just goes to show that even a small unforced error could mean a huge difference to the results.”

Australian Daniel Sanders is the top rookie in 12th and team-mate Matthias Walkner is 24th on the other Red Bull KTM entry after a technical problem earlier in the event.

Brabec sits 13th, 19:56s behind Price, ahead of the first part of the marathon stage from this afternoon (AEDT).