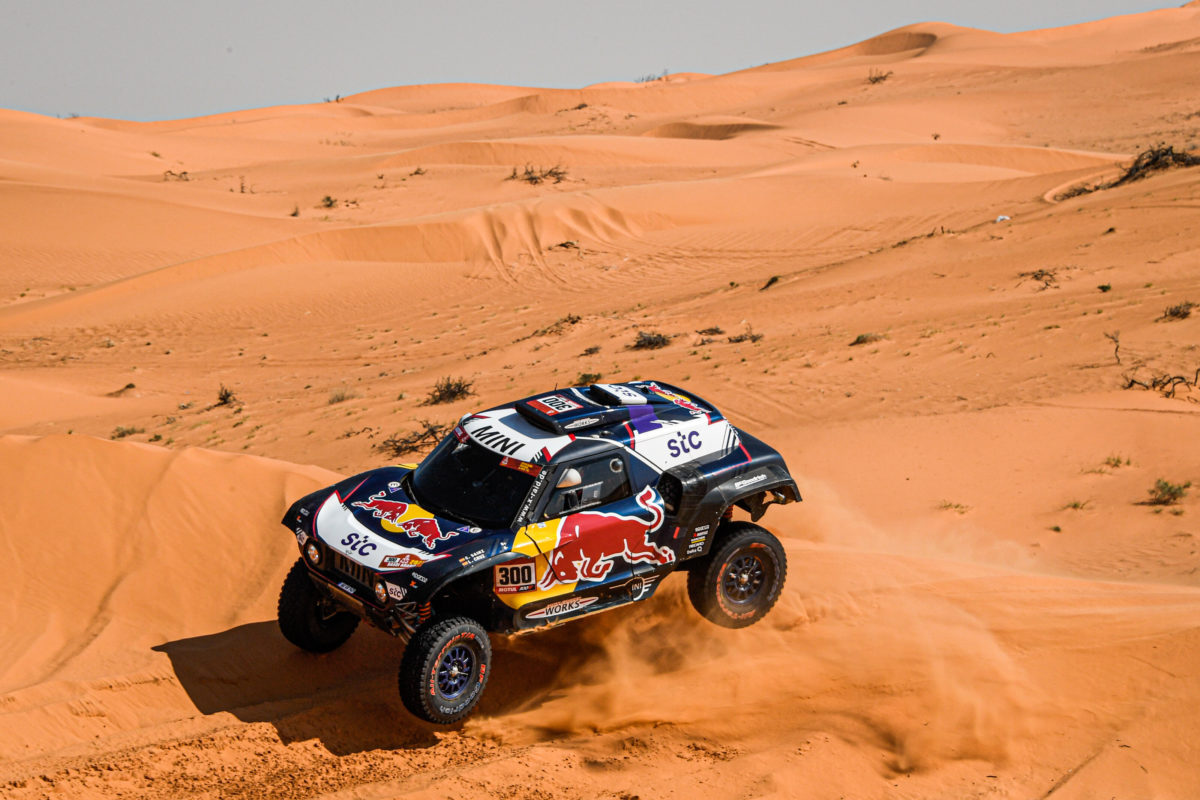 Carlos Sainz has won Stage 6 of the Dakar Rally as X-Raid Mini JCW team-mate Stephane Peterhansel retained his overall lead in the Cars.

Sainz was fastest through the entirety of the 347km special between Al Qaisumah and Ha’il, 4:03s ahead of Overdrive Toyota’s Yazeed Al Rajhi and 7:16s ahead of Toyota Gazoo Racing’s Nasser Al-Attiyah.

Peterhansel was only another 18 seconds adrift on stage and his advantage in the general classification is 5:53s over Al-Attiyah before the rest day.

Sainz continues to sit third overall, but still trails his team-mate by 40:39s after some significant navigational missteps earlier in the rally, a point which continues to frustrate the three-time Dakar champion.

“Today the stage was more in the sand and on sandy tracks, so it was not so difficult for navigation, really,” he explained.

“There were not many places where you could get it wrong, so everything was good.

“On one day, I lost 30 minutes; on another, 30 minutes too; and on another day, six minutes, so more than an hour in all.

“Not with the navigation like it is here, but when there is a lot of tension and plateaux with many tracks and secret way points and all that, we didn’t understand it very well.

“We need to analyse really carefully because now there is a different philosophy for the roadbook.

“My best moment is maybe today and the worst is all the rest of the days – I have been losing a lot of time, so it’s not easy.”

Peterhansel ran second-fastest to Kilometre 108, after which Al Rajhi took over the position and did not relinquish it.

Al-Attiyah then closed in on the 13-time Dakar champion and eventually usurped him at what was officially Kilometre 404 of the shortened special.

Peterhansel, who had been top three in every stage until the sixth, gave great credit to co-driver Edouard Boulanger for their favourable situation.

“If we take stock after one week, then, yes, it’s been a good week, a really good week, because we didn’t make many mistakes,” said the Frenchman.

“We saw that the car is displaying really good performance.

“If I need to mention a negative point, it would be two things: yesterday when we got lost, we were just turning round and round and the feeling was really bad because we thought we had lost five, 10 or 15 minutes and it’s not a good feeling.

“Also, the Prologue, the first really small stage – I was really too safe and after that I said to myself, ‘shit, I’m too old for this fight, my speed is not good’, so those were the negative points.

“The positive point is the new team with Edouard. This is the first time we’ve done a race together like the Dakar and also for him, he has never done the Dakar as a co-pilot.

Jakub Przygonski (Orlen Hilux Overdrive) retains fourth overall, while Nani Roma (Bahrain Raid Xtreme) has moved up to fifth, although both are beyond an hour from first position.

Sebastien Loeb had been 10th overall but his BRX broke a suspension arm just shy of 100km into the stage.

The Frenchman was waiting for assistance and tracking shows that he still has not made it to the Kilometre 108 waypoint.

Kamaz bagged its 150th Dakar stage win in a one-two-three, with Dmitry Sotnikov’s overall lead now 37:34s in one of the blue Russian trucks.

In Quads, Nicolas Cavigliasso (Drag’On Rally Team) finished third in the stage but has grown his advantage in the general classification to 33:18s.

A mechanical problem for Francisco ‘Chaleco’ Lopez (South Racing Can-Am) cost him the lead in the Lightweight Vehicles and SSV classification, both of which are now headed by Aron Domzala (Monster Energy Can-Am).

Competitors now enjoy the rest day before the marathon stage, from Ha’il to Sakaka, on Sunday (local time).