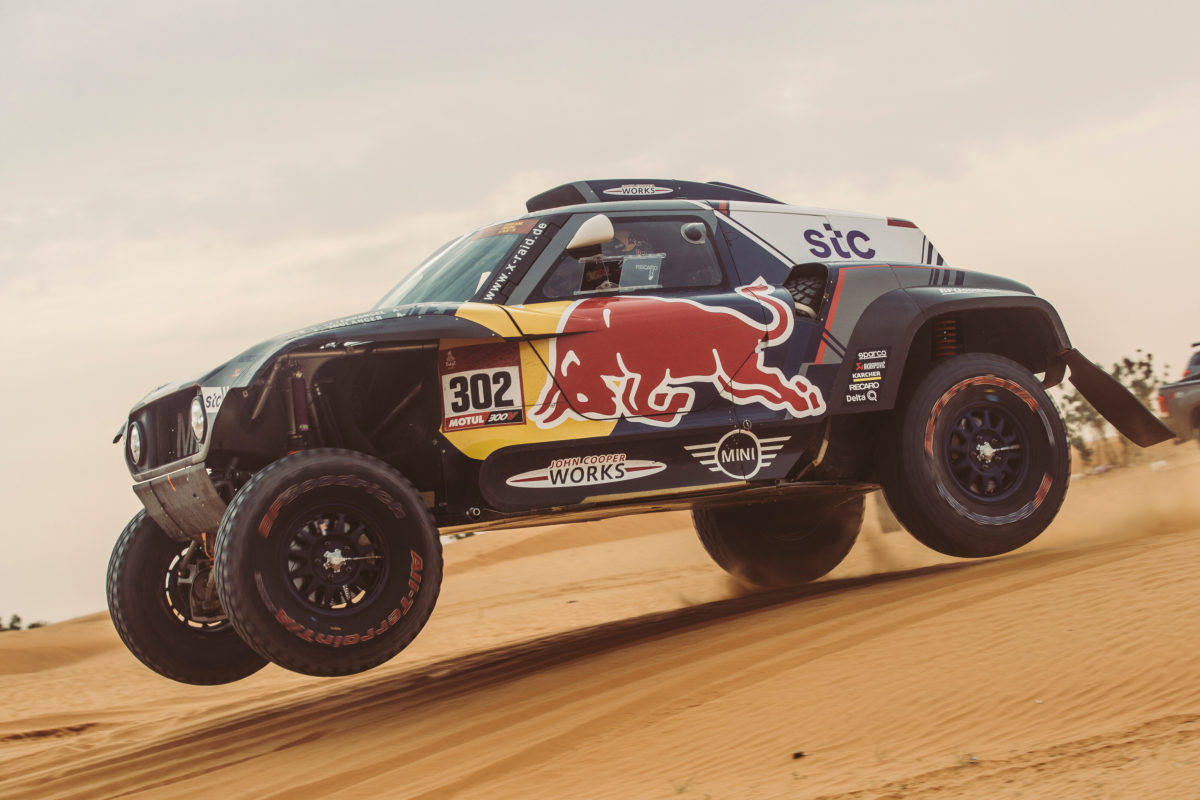 Nasser Al-Attiyah had been chipping away at Peterhansel’s advantage with the previous three stage wins, but lost 2:13s relative to ‘Mr Dakar’ and now trails by 6:11s in the general classification.

Al-Attiyah’s Toyota Gazoo Racing team-mate, on the other hand, was fastest all the way through the 456km special between Riyadh and Al Qaisumah, although the South African is still nearly two hours off the overall lead.

De Villiers was as much as 7:13s clear of the field but it was countryman Brian Baragwanath who finished strongly in his Century CR6 to be only 58 seconds slower at the finish line.

“Today was a real Dakar stage: really complicated with the navigation but also not easy in the dunes; some rocky plateau, some tracks with really big rocks… not really nice to drive,” declared Peterhansel.

“At the end, it was not beautiful landscape and not nice to drive, but it was selective, a really selective stage like it always is on the Dakar.”

Al-Attiyah, who opened the road by virtue of winning Stage 4, noted that his main rival was able to follow his Hilux.

“It was not easy to open,” said the Qatari.

“We saw a lot of bikes coming and we got confused. At the beginning, we lost maybe eight or nine minutes. I’m happy to have got here finally.

“Stephane did a very good job because he stayed behind me all the way. I’m quite happy to finish day five and tomorrow Stephane will open and it will be easier for me.

“We’re taking it one day after another and we’ll see where we are. Next week will also be very difficult.”

Carlos Sainz remains third overall in the other Mini buggy but his odds of back-to-back Dakar crows lengthened again with the Spaniard now 48:13s behind Peterhansel for the rally all told.

The Spaniard ceded another 12:54s relative to his team-mate after getting lost early in the stage.

No one else is within an hour of the overall lead, with Jakub Przygonski (Orlen Hilux Overdrive) fourth and Martin Prokop (Benzina Orlen Ford Raptor) climbing to fifth.

Sebastien Loeb (Bahrain Raid Xtreme) dropped from seventh to 10th in the general classification having lost around 50 minutes in the first 74 kilometres.

Henk Lategan, who had started the day fourth overall, broke his collarbone when he crashed his Toyota Gazoo Hilux while co-driver Brett Cummings escaped serious injury.

🚗 4th in the GC this morning, @henk_lategan suffered a spectacular accident at the beginning of the special. He has fractured his collarbone and has been airlifted to Riyadh. His co-driver @BrettCummings83 was unharmed. 🚑#Dakar2021 pic.twitter.com/F1o9BSlaIK

Dmitry Sotnikov tightened his grip on the Trucks class, his lead now 33:53s, but it was Kamaz team-mate Andrey Karginov, the 2020 champion, who won the stage.

A day after the top two overall in Quads were separated by just nine seconds, Nicolas Cavigliasso (Drag’On Rally Team) extended his margin to 23:48s.

It is in fact Manual Andujar (7240 Team) who is now his nearest rival, after Alexandre Giroud (Team Giroud) and Giovanni Enrico (Enrico Racing Team) both dumped over 40 minutes despite finishing fourth and third respectively in the stage.

Francisco ‘Chaleco’ Lopez (South Racing Can-Am) is still ahead in the SSV and Lightweight Vehicles classifications.

Stage 6 is the last before the rest day.