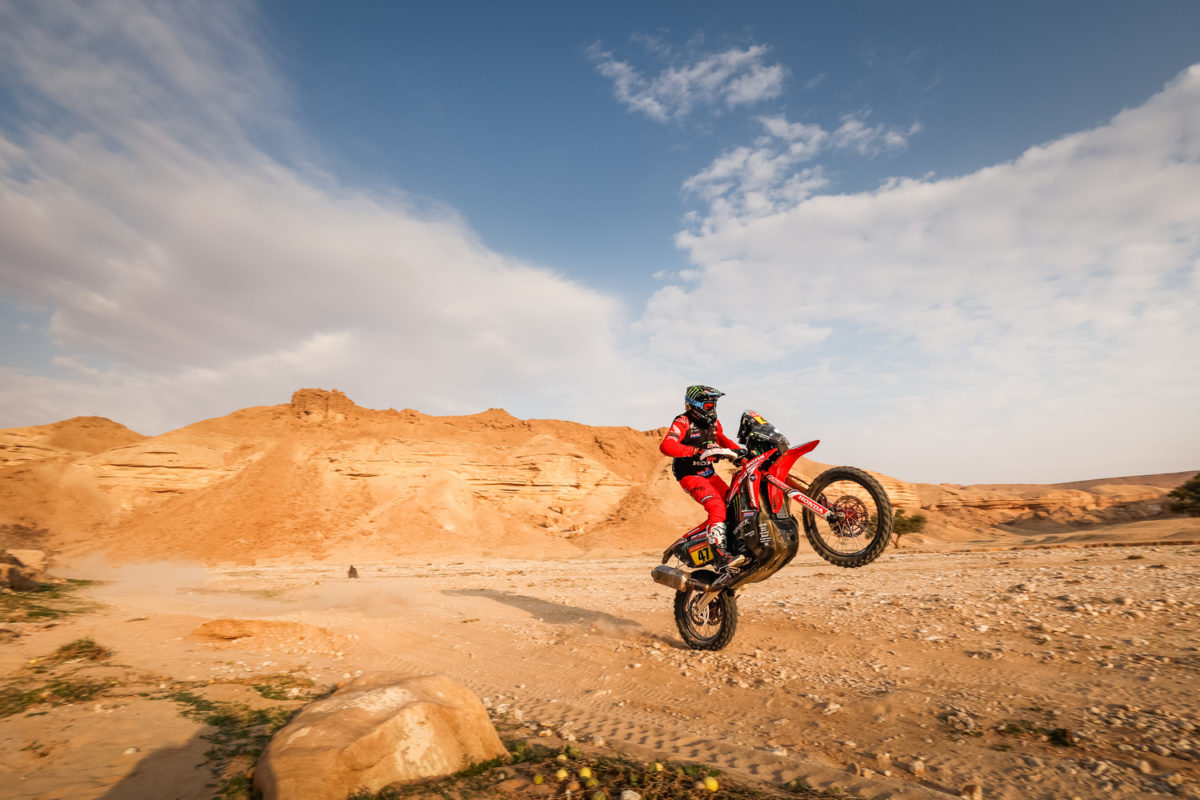 Kevin Benavides leads the Dakar despite suffering a suspected broken nose in his Stage 5 victory in the Bikes, while Toby Price roughly halved his deficit to top spot.

‘Nacho’ Cornejo is 3:42s behind first position, with Price only another second worse off and the Australian’s Red Bull KTM team-mate, Sam Sunderland, rounding out the top five.

It was in fact either of the aforementioned Honda riders who led at every waypoint on the 456km special from Riyadh to Al Qaisumah, Benavides initially, after starting 14th in the road order.

He lost more than five minutes from Kilometre 43 to Kilometre 74 but clawed back that time and was in front again at Kilometre 292.

Despite falling and injuring his nose along the way, the Argentine won the stage by exactly a minute over Cornejo.

“It was a really hard day for me,” said Benavides.

“At the beginning I got lost like all the riders, but after that I started to push a lot.

“On one dune I jumped, a big jump, and I crashed because I hit another big one with the front wheel.

“I banged my head like this and broke the GPS and everything. I cut myself too and started to lose a lot of blood. There was also some pain around my ankle.

“In the end, I continued and kept pushing with a lot of pain, so, yeah, it was really hard for me today.

“My nose is broken and also I broke the helmet, it was really hard.

“I think I’ll be okay for tomorrow. I’m in pain, but it will be OK.

“I also tried to push on the last part to win some time, but it was hard and there was a lot of pain today. But it’s like that, this is the Dakar.”

Price went on something of a charge to the finish line to record the third-fastest stage time, 1:20s slower than Benavides having been 13:35s behind then-leader Cornejo at one point.

De Soultrait lost 7:55s relative to Benavides on the stage, clocking the sixth-quickest time of the day.

Rookie Daniel Sanders had a less successful showing than on the previous day, ending up off-course before the first waypoint and reaching the finish 16:01s off the stage pace.

The KTM Factory Team rider edged up a position in the general classification to 13th, but is an increased 24:45s away from the rally lead.

He is nevertheless one spot and 24 seconds better off than last year’s champion, Ricky Brabec (Monster Energy Honda), who only got within 15 minutes of the stage lead at the finish line.

The last hit-out before the rest day takes the field 618km to Ha’il, including a 448km special, with a route said to be sand-dominated.

HIGHLIGHTS: Riding in a pack in the dunes