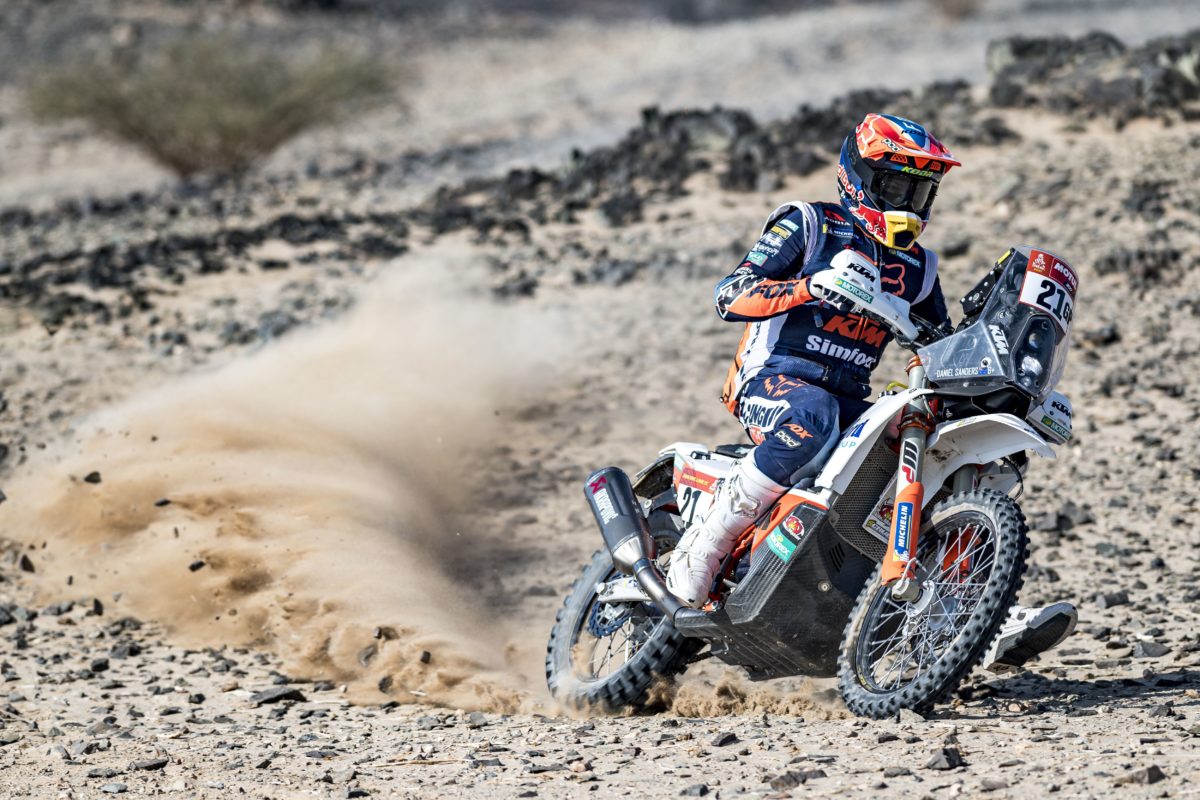 Daniel Sanders got away with what he described as “a really good crash” as he finished a personal best second in the latest stage of the Dakar.

Competing in just his second cross-country rally, The KTM Factory Team rider had matched his Prologue result of third on Stage 4 before he was elevated another position due to a penalty for Ross Branch.

See below for updated general classification

Sanders is now top rookie at 14th overall and 14:08s off the lead, a gain of more than a minute-and-a-half.

However, there was a scare during the 337km special between Wadi Ad-Dawasir and Riyadh.

“I started off strong,” he said.

“The boys out front were making some good lines and then I just corrected their errors and just tried to concentrate on the roadbook as much as I could.

“Then I had a really good crash in the dunes; just a drop-off and there was a hole and I was just making sure I didn’t injure my shoulder again from a few weeks ago, when I dislocated it.

“It was good to finish strong; only a couple of little mistakes but, all in all, it was pretty nice, and it was a nice, technical roadbook at the end with the rocky canyons and some nice high-speed today also.”

Sanders admitted that he also had a navigational mishap late in the stage, although it was only a minor loss.

“Just hit the last waypoint and I looked down just to make sure I got it, and then it was just like, the finish is the next one, and I was like, ‘Alright, should be wedged down this dry riverbed,’” he recounted.

“But then there was another node I sort of missed, there was a tricky one at the end, so it was good, it was a minute or so here.

“But as soon as I saw the finish line, I was happy to come away safe and bike’s all in one piece, so looking forward to it tomorrow.”

Team-mate Toby Price was road opener by virtue of winning Stage 3 but slipped to 7:47s off the overall lead and now holds eighth position after clocking the 22nd-fastest stage time.

The two-time Dakar champion was nevertheless not especially concerned.

“For sure, it was a little easier than on previous days in terms of the navigation, but I managed to make a small mistake after the first checkpoint and was caught by the rider behind.

“After Kilometre 80, we pretty much rode the rest of the stage together, trying to stay out of each other’s dust.

“I made a couple more small errors later on, which cost me a few minutes, but on the whole, it was a solid stage and I’m happy with the result.”