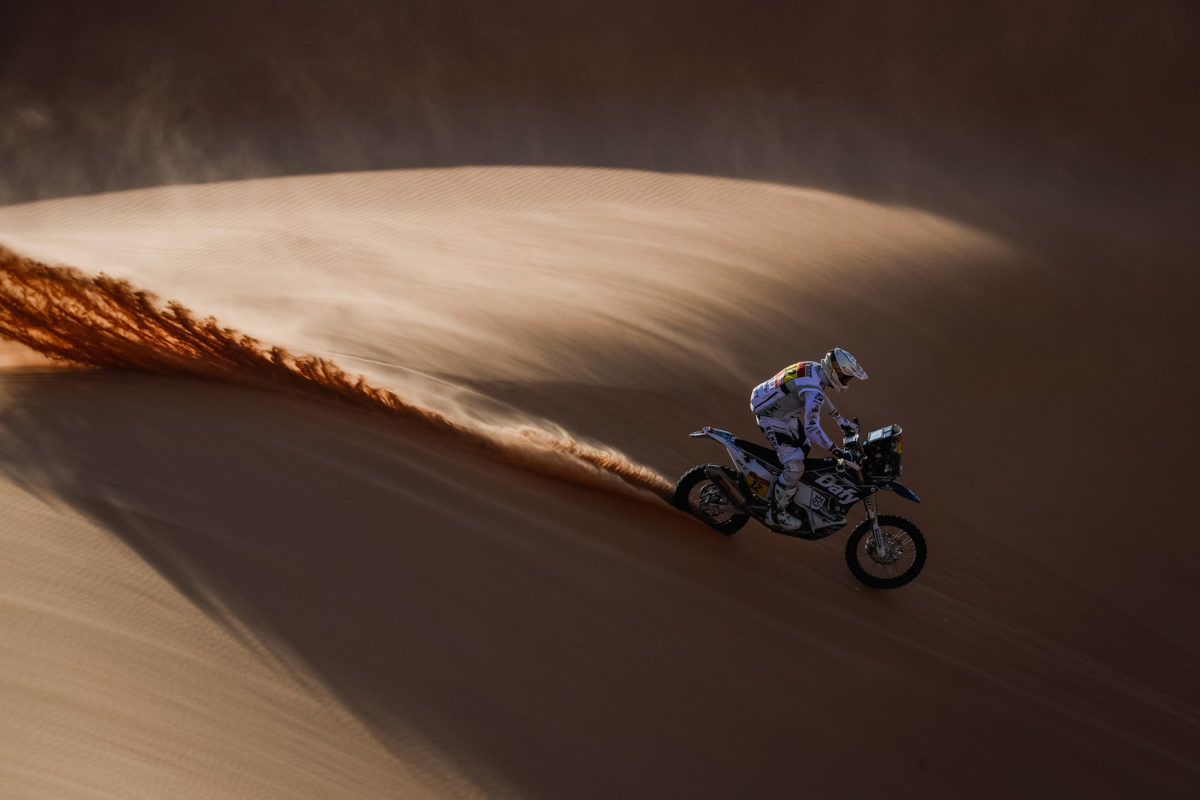 Xavier de Soultrait has become the latest overall leader in the Bikes division of the 2021 Dakar Rally as Toby Price slipped back on Stage 4.

De Soultrait’s advantage is a mere 15 seconds over Joan Barreda Bort, who picked up a second stage win in three days, while Price is eighth in the general classification at 7:47s back.

Heading out as one of the road openers was again a significant burden, with Red Bull KTM’s Sam Sunderland setting the quickest stage time of the first five starters but only the 12th quickest across the field.

Having experienced that pain on Stage 3, Barreda Bort and his Monster Energy Honda held sway at all but one waypoint on the fourth special of the event.

The Spaniard is worried, however, about how quickly he is going through his rubber given riders are allocated six rear tyres for the whole event.

“It was another good stage,” said Barreda Bort.

“I started very far back because of my result yesterday, but that’s the way it is in this Dakar; you’re either at the front or far back. We need to keep it up.

“I’ve used three tyres so far. I think the one I used today is quite worn, but I was supposed to use it for three days, so it’s not great news. But we’ll see what we can do in the coming days.”

De Soultrait generally gave up only small amounts of time to Barreda Bort between each waypoint, riding his HT Rally Raid Husqvarna to the fifth-best stage time.

The latter was in fact the only other pilot to lead at a waypoint, 80km into the 337km special, but made a navigational error soon after and eventually reached the finish with a time 14:42s slower than Barreda Bort’s.

For rookie Sanders, who got away with a crash on a dune, 14th overall represents a gain of two spots, while third is his best result in a stage proper after grabbing the same position in the Prologue.

The Monster Energy Honda rider was only 5:18s off the pace to the penultimate waypoint but lost another 7:35s in the last 39km, and is an increased 16:21s away from the event lead.

Stage 5 runs from Riyadh to Al Qaisumah, with a 456km special and 662km in total, and is tipped to be the toughest of this year’s Dakar.

UPDATE: Kevin Benavides and Ross Branch were subsequently given penalties which mean both are now 5:24s behind the overall lead, and make Daniel Sanders the stage runner-up