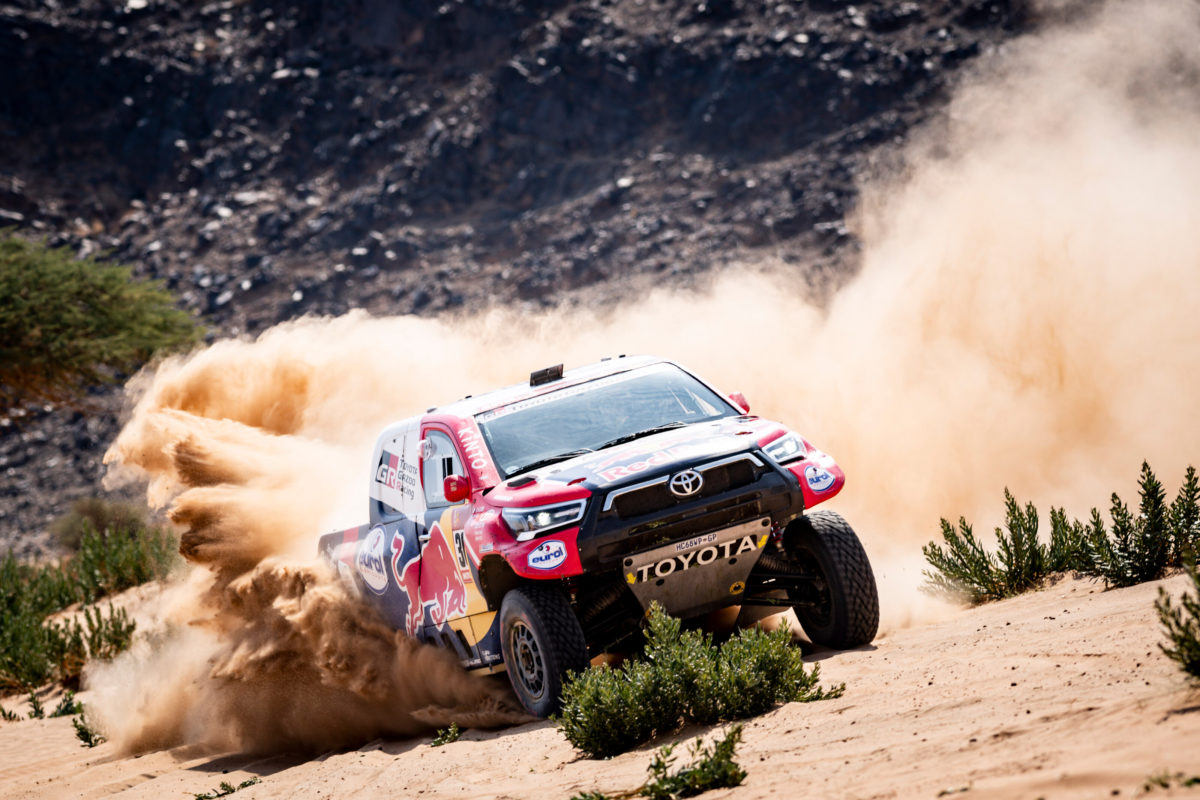 Nasser Al-Attiyah has taken a third stage win in a row but only gained 11 seconds on overall Dakar leader Stephane Peterhansel.

In a close-run thing on Stage 4, which comprised a 337km special between Wadi Ad-Dawasir and Riyadh, the top four were covered by 2:56s at the finish line.

Al-Attiyah was fastest for most of the way in his Toyota Gazoo Hilux but Peterhansel, who is piloting one of the X-Raid Mini buggies, was never more than 1:10s behind at any waypoint.

The two multiple-time Dakar champions are now separated by 3:58s at the top of the general classification, while Carlos Sainz sits third at 35:19s back from team-mate Peterhansel.

“We’re not marking one another, it’s just one relentless attack after another, and in the end we finished in the same time,” observed Peterhansel.

“Apart from a small navigation error near the finish, I don’t think I can attack much more. To stay in contention, we need to go all out. So far, so good, as we aren’t making too many mistakes.

“In the old times, 50 percent of all contenders would be knocked out for the race by driving mistakes or technical issues, but it’s become far less common, so you just have to hold on.”

Sainz, who had fallen over half an hour off the pace when he got lost and copped a puncture on Stage 3, was only 31 seconds slower than Al-Attiyah to Kilometre 298 but then lost another 2:25s relative to the Qatari.

The 2020 Dakar champion ended up with the fourth-fastest stage time, behind leading rookie Henk Lategan.

The latter makes for two factory Toyota Hiluxes in the overall top four, and his competitiveness is considered handy by his team-mate.

“We lost a minute to an error, but we were hardly the only ones to make a mistake and we quickly got back on track.

“Opening up a gap is difficult, but today it was good to have my team-mate Henk Lategan right behind me.

“That’s exactly what I need, a fast driver who can help me out.”

It was originally Sebastien Loeb who had moved into fourth in the general classification with what had been the fourth-fastest stage time.

However, the Frenchman was found to have been speeding in his Bahrain Raid Xtreme entry, with a five-minute penalty pushing him back to 52:14s off the event lead and into seventh spot overall.

The top five in the general classification is therefore once again rounded out by Jakub Przygonski, in an Orlen Hilux Overdrive.

Dmitry Sotnikov edged Kamaz team-mate Andrey Karginov to the stage victory in the Trucks by 10 seconds while adding almost 10 minutes to his overall lead, which now stands at 26:22s.

Only nine seconds separate first and second overall in Quads, although Giovanni Enrico (Enrico Racing Team) went from top of the table to 7:33s back.

Nicolas Cavigliasso (Drag’On Rally Team) instead heads the general classification, the third person to do so in as many days, while Alexandre Giroud (Team Giroud) remains second.

Stage 5 is a challenging 662km journey from Riyadh to Al Qaisumah, which includes a 456km special.