Minis on top after opening stage of Dakar 2021

Minis on top after opening stage of Dakar 2021 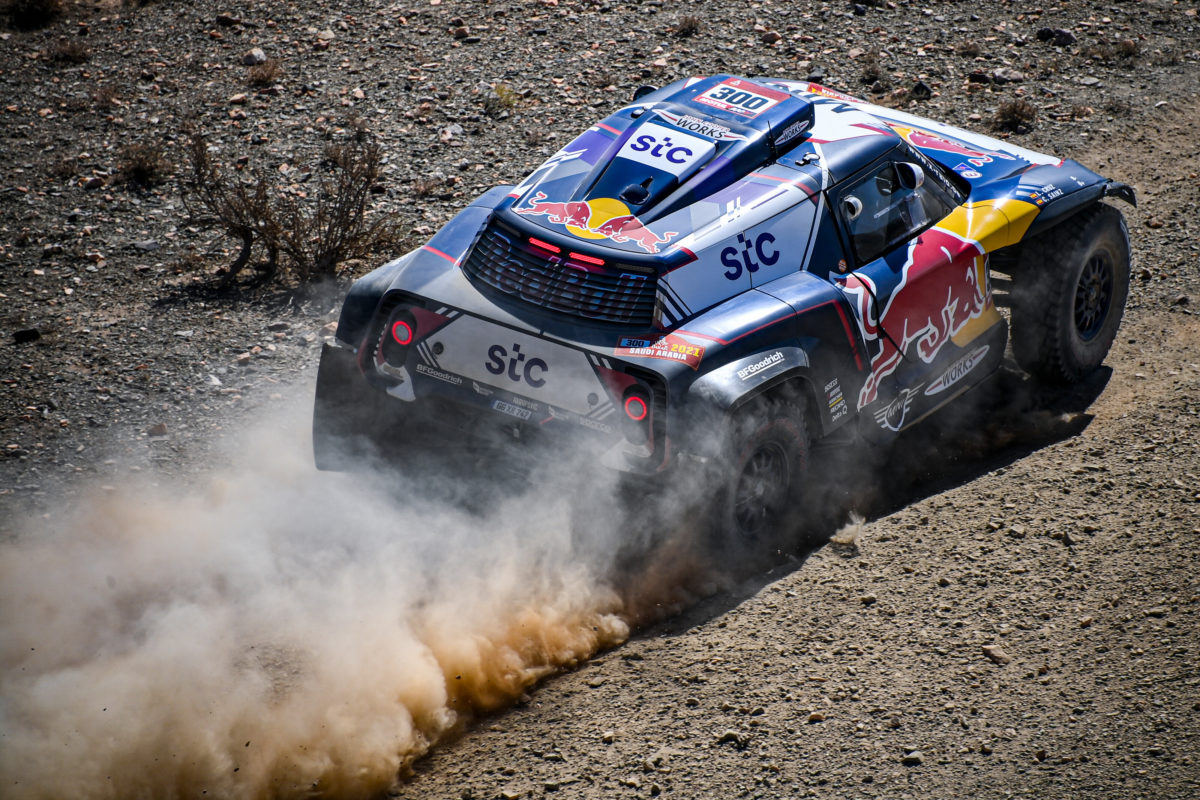 Carlos Sainz holds a slim lead over X-Raid Mini team-mate Stephane Peterhansel after Stage 1 of the Dakar while it was an uncompetitive day for the Toyotas.

Jakub Przygonski sits seventh overall in his Overdrive Hilux, one spot up on the first of the factory Toyota drivers in Giniel de Villiers, while three-time Dakar champion Nasser Al-Attiyah holds 10th in another Hilux.

After a short Prologue on the Saturday (local time), the opening stage proper of the event took the field from Jeddah to Bisha, with a special of 277km out of a total of 623km.

Vaidotis Zala (Agrorodeo Mini), a stage winner in 2020, was quickest to each of the first two waypoints before the battle for early honours became an all-X-Raid buggy affair.

Sainz and Peterhansel set a strong pace and the latter led the former by 3:44s at the penultimate waypoint before suffering a puncture.

In the end, it was the Spaniard carrying the #300 plate by virtue of his Dakar 2020 victory who won out by 22 seconds on the day, and sits five seconds clear of Peterhansel in the general classification.

“Navigation was not easy and there were a lot of rocks,” said Peterhansel.

“It was so easy to get a puncture and we got one 30km from the end of the stage. Tomorrow’s stage also looks tricky.”

Sainz’s day was similarly far from straightforward, the three-time Dakar champion also incurring a puncture at one point and admitting, “There was a place where we got lost for three or four minutes, a place where lots of other cars got lost.”

Al-Attiyah (Toyota Gazoo Racing) is 11:58s off the pace after this early stage, following a challenging day for the man who was the Prologue winner and therefore had to open the road in the Cars.

He ceded around three minutes relative to the stage lead on the run to three separate waypoints but recovered a little bit of that time due to Peterhansel’s late misfortune.

“We decided yesterday to win the Prologue and to open, because we knew we [would] lose time but okay, tomorrow should be much better,” the Qatari explained.

“Today we did a good job and without any mistakes. I’m happy to be in the finish.”

Sebastien Loeb has made a horror start to Dakar 2021, copping three punctures on Stage 1 and struggling with navigation.

The nine-time World Rally Champion is already 22:27s adrift of the overall lead, in 18th position overall in his Bahrain Raid Xtreme entry.

Kamaz has taken up its not unusual position atop the Trucks classification, with Dmitry Sotnikov a full 7:39s clear of the field.

In Quads, Alexandre Giroud (Team Giroud) converted his Prologue win into another on Stage 1, while Austin Jones (Monster Energy Can-Am) holds a 45-second advantage in SSV.

“There were lots of very tricky things on the stage,” said the Spaniard.

“We had one puncture, but I think everyone had at least one today.

“The work that my co-driver Francois (Cazalet) did on the navigation was incredible because it was so tough today.”

Stage 2, on Monday (local time), takes the field to Wadi Ad-Dawasir with 457km special stage running out of a total of 685km.