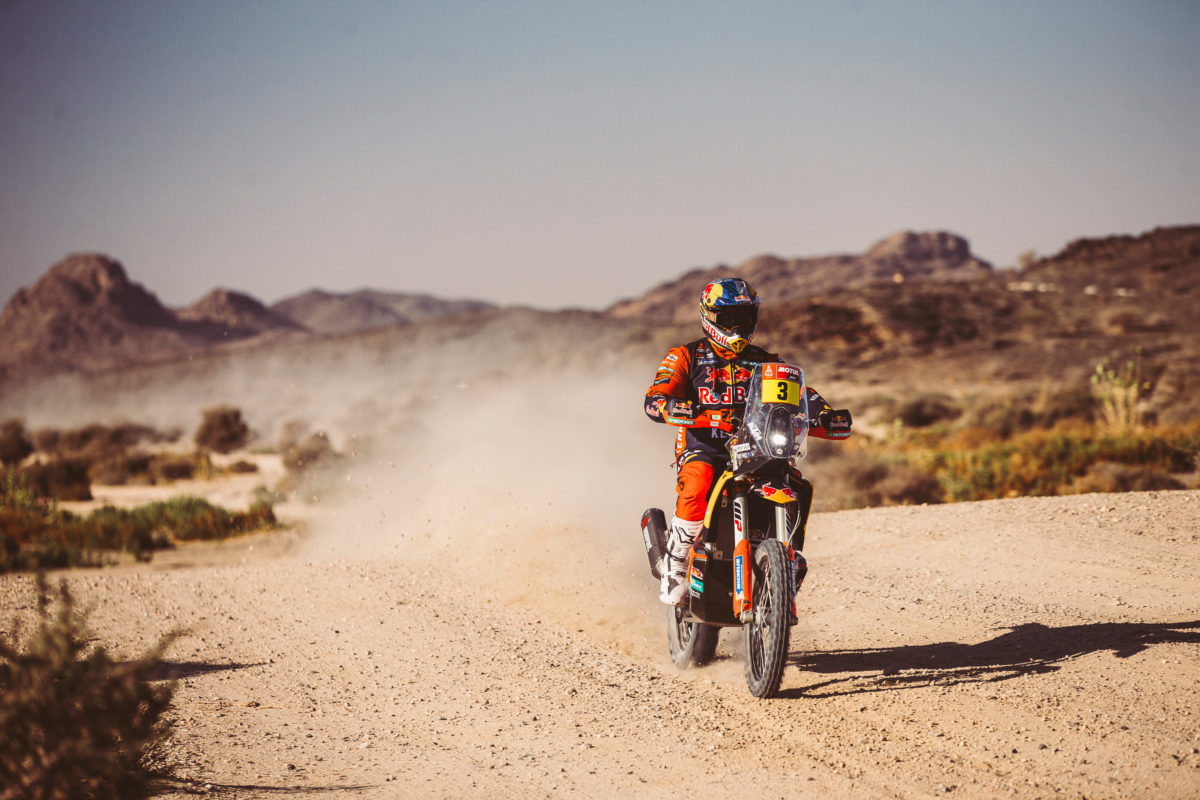 Toby Price has won the opening stage of the 2021 Dakar Rally as last year’s champion, Ricky Brabec, gave up almost 20 minutes after getting lost.

Price took the lead at the Kilometre 135 waypoint, just shy of halfway through the 277km special between Jeddah and Bisha, and maintained top spot thereafter.

Having finished ninth-fastest in the Prologue, the Red Bull KTM rider now holds a 27-second advantage at the top of the general classification, over Monster Energy Honda’s Kevin Benavides.

Honda’s main man, on the other hand, plummeted in the standings due to an early navigational mishap.

Brabec was first to set off by virtue of winning the Prologue but would cede just over 13 minutes to the first waypoint, at Kilometre 37, and another five minutes relative to Price between Kilometres 92 and 135.

With the 24th fastest stage time at the time of writing, the American is 16:49s off the overall pace in 24th position.

Price was as much as 1:33s clear on stage, at Kilometre 222, but the likes of Benavides and the Australian’s KTM team-mate, Matthias Walkner, made up ground in the last 55km of competitive running.

Walkner closed up also on Benavides to be just a second slower than the Argentine to the finish line and now also occupies third in the general classification, 1:15s behind Price.

Sam Sunderland made it three Red Bull KTM entries in the top four, on Stage 1 and overall, to be 4:11s away from the event lead.

Joan Barreda Bort followed Monster Energy Honda team-mate Brabec onto the stage but he too got lost before the first waypoint, and the Spaniard is 18th overall at 14:21s behind Price.

Another big name to stray in the wrong direction was last year’s runner-up, Pablo Quintanilla (Rockstar Energy Husqvarna), who is 21st overall.

Of the other Australians, the KTM Factory Team’s Daniel Sanders is 25th at 19:01s from the overall lead, Michael Burgess (BAS Dakar KTM) is currently showing 34th, and Andrew Houlihan (Nomadas Adventure) is yet to finish after a gremlin on the Prologue meant he was among the later starters.

Stage 2, on Monday (local time), is a 685km journey from Bisha to Wadi Ad-Dawasir, of which 457km is timed special.

HIGHLIGHTS: Brabec and Barreda-Bort get lost