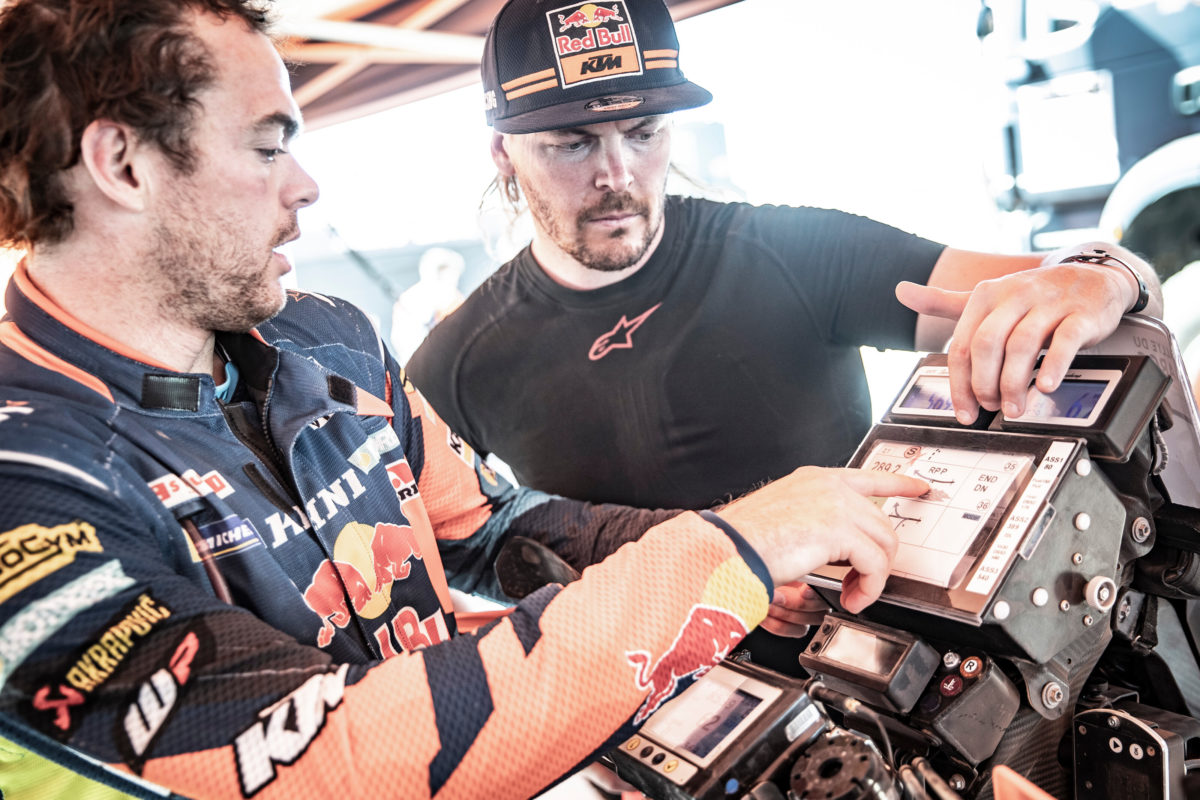 Toby Price believes that receiving roadbooks just before the start of every stage of this year’s Dakar will allow riders to begin each day in a ‘fresher’ state.

Roadbooks will only be handed out 20 minutes prior to kick-off each morning, a practice which was introduced for selected stages in 2020.

While the route is therefore something of a mystery until just before competitors set off, it also makes for easier preparation on the evening prior, explained Price.

“In a way it’s always been nice to kind of read through the roadbook and get familiar with what’s going to come up for the next day.

“You could really study the roadbook, and we’d spend three or four hours in the afternoon after every stage doing this.

“But now, we kind of – not really get to relax – but we get to prepare and get everything organised, ready for the next day, a little bit earlier.

“You do kind of feel a little bit more fresh because you’re not really tiring yourself out mentally trying to read a roadbook and mark things and get sorted, so I think it’s really good.

“We’re all in that same place as well, we all get the roadbooks 20 minutes before, and as long as we have enough time to load it into the roadbook tower, we’re all good to go and looking forward to it.”

Holding back the roadbook is one of a number of changes which have been introduced for Dakar 2021 in order to slow down competitors and make the contest more technical.

Preparation for the event as a whole has, however, been made all the more difficult by the COVID-19 pandemic, which prevented riders from testing or competing for months.

“It’s been a lot different than previous years, but it’s the same for everybody,” said Price.

“We’re all in the same situation and we’ve just been trying to jam in as much as we can in the last four months.

“We spent pretty much eight months at home in Australia, and it’s the longest period I’ve had at home, but we’ve spent the last four-and-a-half months away from home, and missed Christmas with family and friends, and everything.

“We’ve been in Dubai and doing a lot of testing there, and everything’s gone really well.

“We did the Andalucia Rally, and that was everyone’s first kind of race back for the whole year.

“KTM’s been working hard behind the scenes and just trying to deliver us the best equipment we can get, and now we’re a few days away from starting the 2021 Dakar, so it’s exciting.

“It’s been tough to put this whole thing together and I think once we all take off that first day and get into that race, I think a lot of stress and a lot of issues behind the scenes for all teams is going to come to an end, which is good.”

The two-time Dakar champion is one of four Australians entered this year, alongside team-mate Daniel Sanders and fellow KTM riders Andrew Houlihan and Michael Burgess.

Scrutineering begins later today (AEDT), ahead of the Prologue and Start Podium on Saturday (local time).

For more from Price, Sanders, and Houlihan, watch tomorrow’s episode of the KTM Summer Grill from 06:00 AEDT on Speedcafe.com