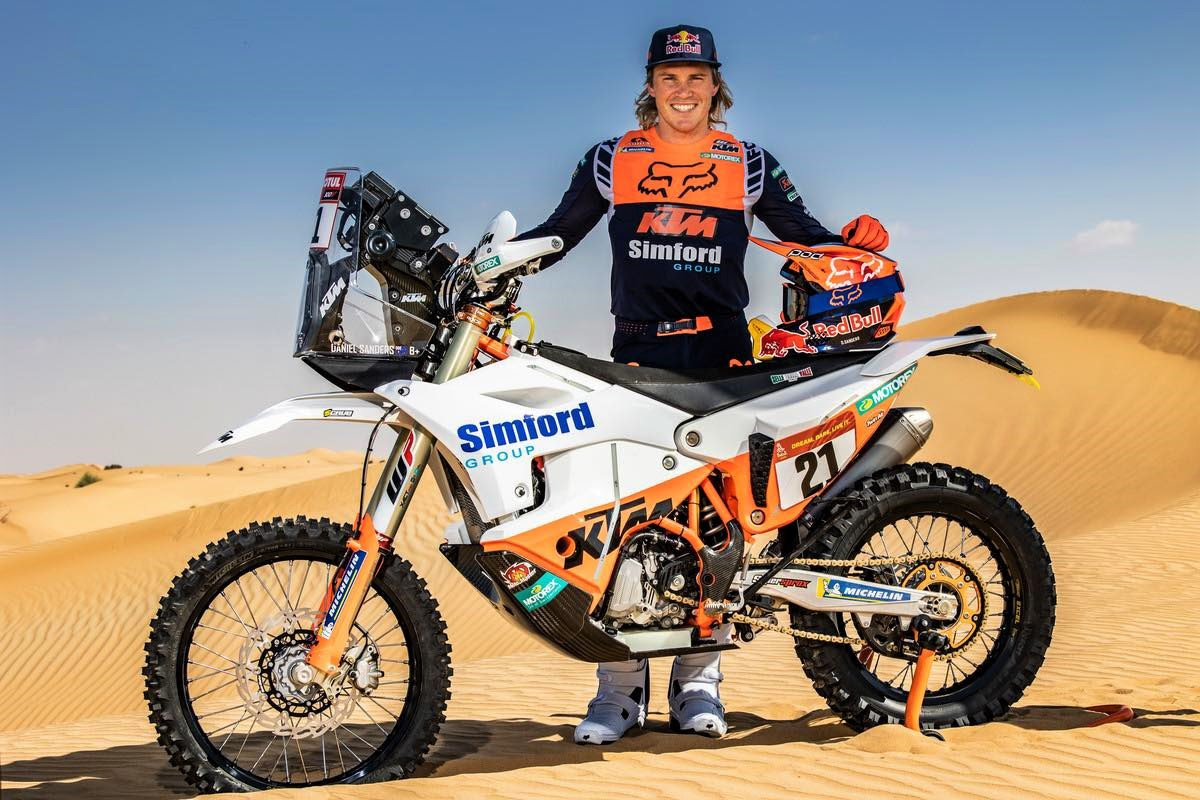 Australian Daniel Sanders is aiming to finish in the top 10 when he makes his Dakar debut as a Red Bull KTM Factory rider.

Sanders, the 2020 Australian Off Road Champion, joins compatriot Toby Price in the KTM ranks for his first shot at the famous rally raid, which is once again held in Saudi Arabia in 2021.

The 26-year-old Victorian has only very limited experience in similar competition, but did win a stage when he contested the Andalucia Rally, an official Road to Dakar event, last October.

“My expectations are to finish and hopefully I’ve learnt a lot over the last four months of roadbook training and with the bike, so I’d really like to get into the top 10 but of course I want to finish it mostly,” said Sanders.

“I’m expecting the worst. I expect long tiring days, low energy so it’s going to be very hard to focus and minimise the fatigue.”

A total of four Australians have entered in this year’s Dakar, all in the Bikes division, with Andrew Houlihan and Michael Burgess also riding KTMs.

“It’s cool to be in a group of Aussies racing and to see Andrew and Michael racing and seeing their passion for the race,” added Sanders.

“We’ve all been in contact and helping each other where we can in this tough situation of COVID. It will be really cool to catch up and here the stories each day in the race.

“For the supporters, I’ll be giving it everything. I haven’t left the country for four months to not finish.

“I think it’s going to take a couple of days in the race to get in a good rhythm and see how the race pans out.

“I hope to be at the pointy end but with only one rally under my belt, I hope I’ve got enough experience in racing and some luck on my side to get up the pointy end. Thanks everyone for their support.”

Burgess, part of the BAS Dakar team, has enduro experience under his belt but he too is tackling Dakar for the first time.

“My training has been great, probably the best I have had leading into any event, and I have really enjoyed the journey. I’m fit and looking forward to riding the road books,” he said.

“My expectations of Dakar are the whole challenge that goes with the label ‘Dakar’. My expectations of myself are to enjoy it; results are not a factor when it comes to the investment made with an event like Dakar. Riding to finish is the goal.

“I am looking forward to Riding with Andrew, Daniel and Toby. We have been talking through social media networks helping each other out. I am also very proud to be waving the Australian flag alongside these three legends.”

Houlihan is also making his first Dakar start, with the Nomadas Adventure team, while two-time winner Price carries the #3 plate in reference to his finish in the 2020 event.

Scrutineering begins later today (AEDT), ahead of the Prologue and Start Podium on Saturday (local time).

For more from Price, Sanders, and Houlihan, watch tomorrow’s episode of the KTM Summer Grill from 06:00 AEDT on Speedcafe.com

CLICK HERE for more on Houlihan’s treacherous preparation for Dakar