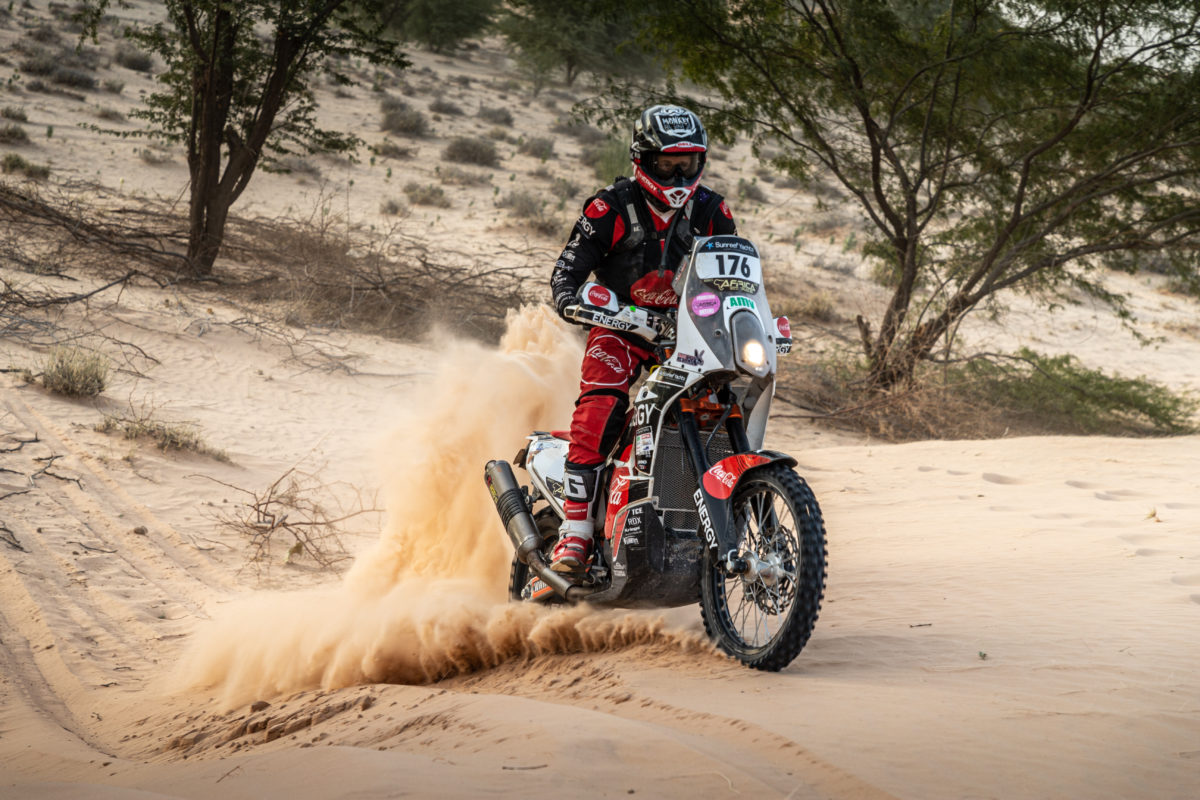 The surgery to replace Houlihan’s right knee (See below for x-rays), injured before competing in the Hellas Rally 2019, had gone well and his recovery was remarkably on track.

His ribs and punctured lung had recovered well too, and Andrew was feeling confident that he could cope with a week’s training in Morocco before stepping up for the Pan Africa Rally and Rallye du Maroc (Rally of Morocco).

So, Houlihan and his wife Katie flew to Morocco where they met up with Dakar legend Gerard Farrés.

The training was intense. Houlihan was gaining experience with the massive 300 metre high sand dunes around Merzouga and improving his navigation skills by day and night, all while coping with 50-degree heat every day.

It was good preparation for what lay ahead.

The Pan Africa Rally is a five-day event held around Merzouga, a small Moroccan town in the Sahara desert. Each day riders were sent into the dunes on special stages ranging from 200 to 400 kilometres.

“The dunes are like something I’ve never experienced,” said Houlihan.

“You look at them going, there’s no way you can get up that.

“You just power up and the throttle is fully wide open as you head towards the top of the dune, the bike starts labouring and then as you get to the top you realise that it’s a near vertical drop over the other side.

“And you have to back off that throttle once that front wheel gets just over the top.”

Houlihan had one instance on day four where the throttle body had jammed and he couldn’t back off quickly enough. He found himself cartwheeling down the other side of the dune.

“The landing for me was soft, but for the bike it wasn’t so good,” Houlihan reported at the time.

The subframe on the Sherco 450 had broken and the throttle body was twisted, ending Andrew’s day but not his participation in the rally.

Some overnight repairs got Andrew back into the event and he finished the rally in 40th overall.

There was a five-day rest before the next event, Rallye du Maroc in Fes.

“I had a bad night dreaming about sand dunes and navigation, waking up thinking ‘Why am I doing this????’” he said at the time.

“The past three weeks have been equivalent to a Dakar Rally and I’m mentally and physically exhausted.”

A chat to team-mate Pablo Guillen over breakfast made him realise he wasn’t alone; Pablo was feeling the same.

“We are now feeling out of our league and competing at a world class level,” admitted Houlihan.

“We started something eight months ago and made a commitment; I may have underestimated a few things but we will see this through to the end.”

And yes, Houlihan was now playing in the big league!

Rallye du Maroc attracts some of the best riders in the world, including Australian Dakar winner Toby Price.

After the incident in Pan Africa, the Sherco 450 was still having throttle body issues but a change of throttle cable seemed to solve the problem. The bike was a little beaten up but it was good to go again.

Rallye du Maroc begins with a prologue and then special stages over five days.

It presented a different landscape for the riders, and while there were still plenty of big sand dunes, there were also stages with dangerous cliffs and large rocky areas.

Houlihan’s Sherco 450 put him in the Enduro Cup class, and he finished in eighth place.

At the end, Houlihan felt satisfied.

“One thing that made Pablo and I feel a little better was that when talking with the professional riders that race Dakar, every one of them said that Rallye du Maroc days were way more difficult than what to expect at Dakar,” said Houlihan.

It was time to take on a bigger event and that was to be the Africa ECO Race in January 2020.

The Dakar plan was coming together!

The Africa ECO Race starts in Europe and takes competitors on a journey through northwest Africa, tracking along much of the path of the original Paris-Dakar rally and ending at the famous Lac Rose (Lake Retba – the Pink Lake) just outside the city of Dakar in Senegal, West Africa.

The event was conceived after the 2008 Paris-Dakar was abruptly cancelled one day before it was due to start amid fears of a terrorist attack in Mauritania.

Houlihan had realised he needed a rally bike, something more capable than the Sherco 450 enduro bike he had used in Morocco, so he purchased a KTM 450 Rally Replica for Africa.

He had not ridden, or even seen, the new bike until he arrived in Monaco in early January.

He had also not seen the new livery the bikes were carrying; the team had now picked up sponsorship from Coca Cola.

The Africa ECO Race is a 13-day event, with 12 stages including a marathon stage and broken up with a rest day, a similar format to Dakar.

“A race that is comparable to Dakar on almost every level.”

Houlihan took a lot of hard-earned experience into the event, along with a very different metal attitude. His main goal was just to finish.

The event was, in many parts, brutal.

Stage 8 decimated the field with many riders stranded out in the Mauritanian desert for more than 15 hours. For some, like fellow Nomadas rider Ashish Raorane, it was around 30 hours before they made it back to the bivouac.

A fuel pump issue on the second stage cost Houlihan about 90 minutes and dropped him to 55th place.

“Today started out well, I passed about 15 riders in the first 200km and then when my rear tanks were empty I switched to the front tank and had a fuel pump failure in the middle of nowhere,” Houlihan said at the time.

Team-mate Pablo Guillen stopped to assist and also sacrificed time. They transferred fuel from the front tank to the operational rear tanks using Houlihan’s Camelbak, but this left Houlihan without water for the last 150km of the stage.

For the remaining days Houlihan gradually worked his way back up through the field, playing it smart and safe.

His thumb, injured in the crash in Hellas in 2018, was also giving him grief and in the final stages he backed off the pace to ensure he finished.

Houlihan finished 21st overall and ahead of many more fancied riders.

He showed just how quick he can be on a bike, finishing many of the stages in the top 20 ahead of younger and more experienced riders.

The boy from Albury had demonstrated that he could, at the age of 50, compete at a world class level.

And, by completing the Africa ECO Race, he had qualified for Dakar in 2021.

TOMORROW: Find out what Houlihan has done to prepare for Dakar in one of the most difficult years the world has faced 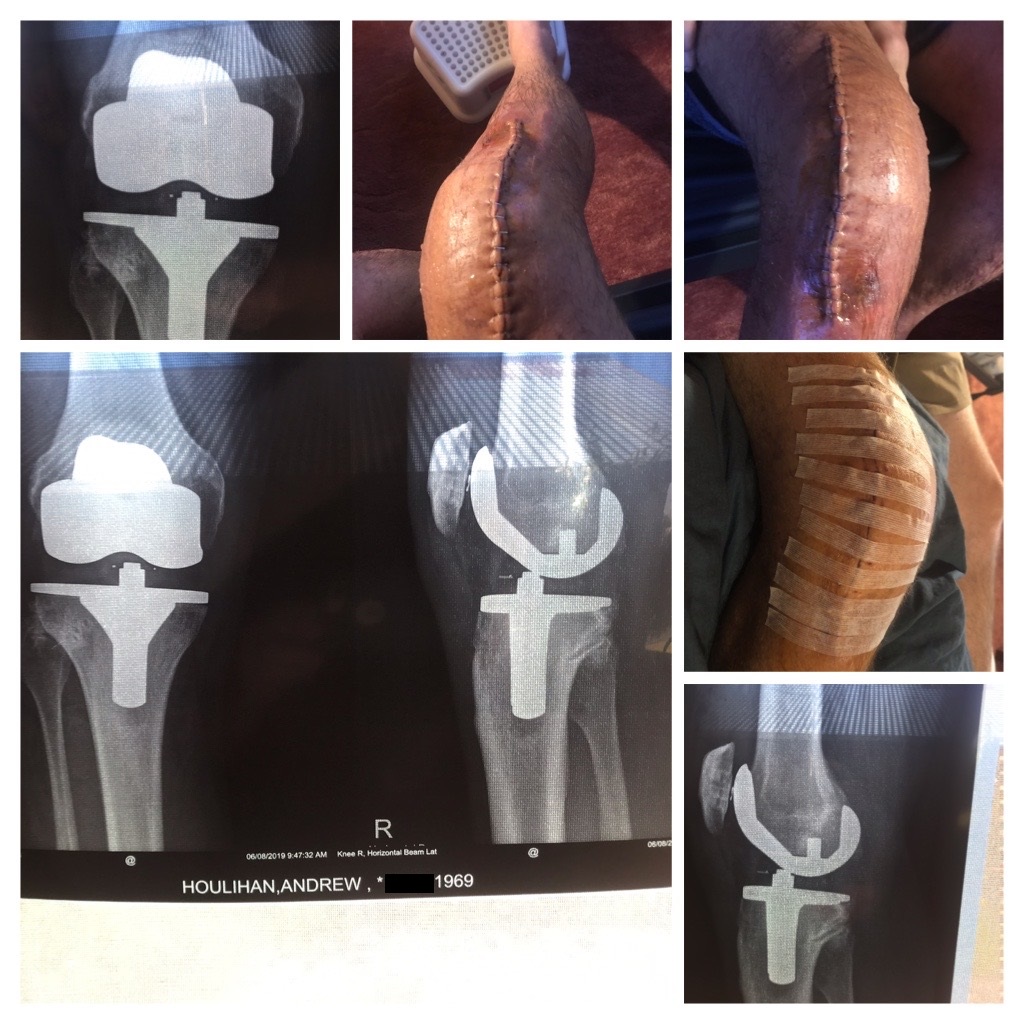