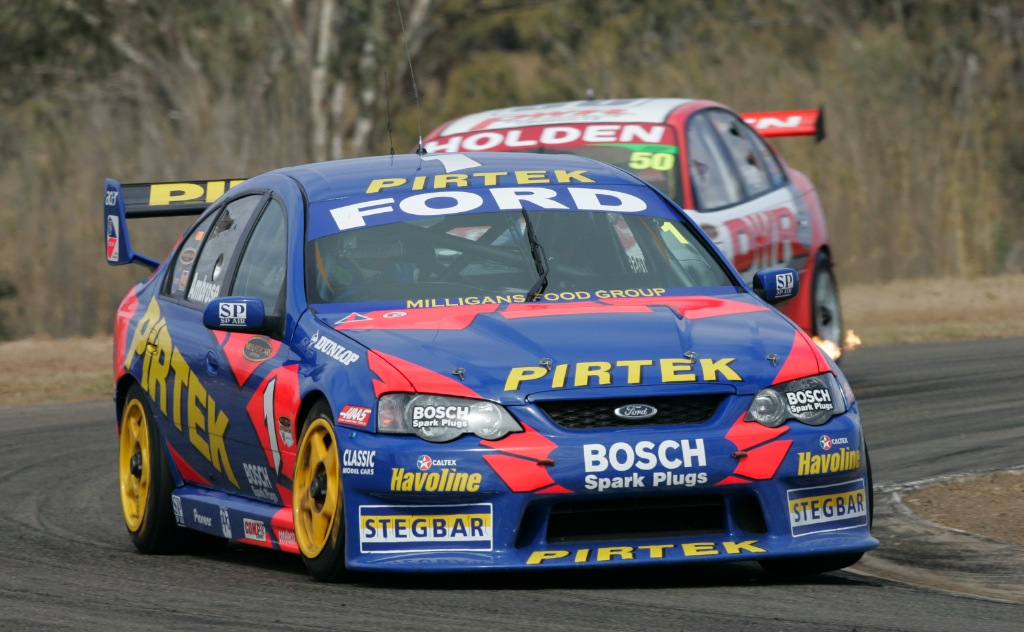 A career spent in motorsport has left Barry Hay rich with unique experiences, from race and championship wins, to life-changing celebrations.

Hay started life in the shadow of his father, a highly accomplished powerboat racer from Queensland.

He quickly carved a career and reputation of his own, and is regarded as one of the most accomplished team managers in Australian motorsport.

That started with an apprenticeship building motors for powerboats, before transitioning across to cars in his final year.

A spell as something of an HSV guru followed before he launched into a full throttle career in motor racing, winning championships with Stone Brothers Racing during the period the team dominated V8 Supercars, as it was then known.

“If you have a look at drivers and crew that went through that place, and you have a look now at motorsport and see who’s still around and whatever and what’s happening, it was probably six or seven guys in the top end of Penske that are all Stone Brothers,” Hay told Speedcafe.com.

“All your drivers, the good drivers you see popping up now, like the SVGs (Shane van Gisbergen) and the (James) Courtneys and go through any of them, they all had a stint in that place.

“It’s the same with the crews; Wes McDougall just gone to SVG’s engineer at Triple Eight, they all got longevity and it’s all because of that place and the way it operated.

“They had their jobs and they were very good at it, and certainly Jimmy Stone’s experience and how he operated is just, he’s like that Tasmanian Devil cartoon; you feel a breeze before you see Jimmy and he comes storming in and he’s got something scrawled on a bit of paper that was next to his bed because he’s had an idea about something in the middle of the night.”

Stone Bothers Racing grew out of what was Alan Jones Racing, formally becoming the eponymous team from 1998.

The backroom staff, as Hay recalled, was similarly impressive with his contemporary peers now holding senior positions within the industry.

Much of that was a result of the culture within the team, which was often gruelling, a by-product of working with Jimmy Stone, an innovative thinker at a time there were greater engineering freedoms.

“Everything was development, and you’d get handed a part and you’d go, at 10 o’clock that night, as it’s warm because it’s come off the machine, or from the fab shop or whatever, and you trying to make it fit for the test day, the next day,” Hay explained.

“He developed shitloads of stuff that’s still in the cars now.”

One of those was the radiator blanking used at the front of cars, colloquially known as the ‘fence post’ based on its original development.

“We were there, at Willowbank, and he had a thought,” said Hay of Jimmy Stone.

“So he went and found a bit of, I don’t know what it was, fence panelling or something.

“It was about, I don’t know, whatever, 100 mil(limetres) high, and it was on Ambrose’s car because Ambrose, by far, was the best test driver ever.

“And that went on, and that’s why they always got called, the fence post, because that’s how it started. So for years, anyone would say, ‘Oh, what fence post do you want in the front of it?’

“That was the precursor to everybody running different design, radiator grills that had different blanking and whatever.

“That bottom strip that he put on there, that turned everything around.”

That was far from an isolated incident, and Hay recounted a sequence of events that left Roland Dane raising his eyebrows as the team worked to develop a new diff at Oran Park.

“We’d had a test day, and (Jimmy Stone) went, ‘I think we’re going to change this’,” he explained.

“I remember, we busted our arse to get it all done, nobody had any sleep, went out testing, and we had two drivers while the boys slept for the hour in the car on the way to Willowbank.”

The changes produced results, much to Hay’s dismay.

“It worked, which is the worst thing that could have happened because the truck was leaving (for Oran Park) in two days or something,” he bemoaned.

“So we come back, pulled everything out of the cars, and made two diff housings overnight, did a second all-nighter back to back, climbed back in the cars, went out testing, and just, it was the bomb.

“We went to Oran Park, and went one-two.

“When they were going in there were guys asleep all over the place; and you had mechanics on lathes trying to make bits and pieces, and guys welding… That was how that whole place rolled, nonstop.

“But I remember Roland was out there testing at the same time,” he added.

“We had an hour break or something. So everybody had like a three day growth, they’d all looked like they’d just come back from a bucks party, and we’re all laying around with our heads on toolbox covers, either asleep or half asleep, laying around.

“I remember, Roland walked past, he went, ‘Jesus, Ross. What are you doing to your guys?’

“But we achieved what we needed to achieve.

“Everybody had a sleep, and a haircut, and got on the plane and went to Oran Park, and we just f**king run a clinic.

“Those experiences, even though it just kills you, are the bomb. That just burns into your brain.”

It’s those experiences, Hay implies, which have kept him in the sport in an era where staff turnover has drastically increased.

Where he had to fight hard to earn his place in the industry, he suggests modern hiring methods ease that path, though as a consequence also result in those who are not committed and therefore unwilling to go the extra yards, as everyone at SBR had.

His time at SBR burned into Hay a work ethic that has remained; an attitude that anything that can be done will be done, and to hell with anything else. Including his own health.

It’s an approach that nets results, but has taken its toll over the years. Aside from an injury sustained while working, he’s also had an extended layoff which was simply the result of burning himself out.

During his time with Lucas Dumbrell Motorsport, a stint highlighted by victory in the Adelaide 500 with Nick Percat, he was physically finished.

“It was a team that had sort of been running to the ground and was completely dysfunctional by the management that was running it at the time,” Hay recounted.

“It was a complete rebuild, a hundred percent.

“It was new cars, complete staff, two new drivers, because we had Percat and Blanchard.

“I’ve got to say it was certainly the hardest thing I’ve ever done, both in terms of what it was that I had to try and achieve with what I had at hand, and probably the most rewarding as well that we just come from zero and we just had this unbelievably, super tight environment.

“I used to take very, very good care of my boys, but at the same time I was quite hands-on because I got a lot of young fellas in there initially, and just sort of spent a lot of time training them right from the scratch up, instead of these days they tend to get dropped just into the mix effectively.

“That’s how we overcame the constant adversity that we had, just being that team and everything involved with it.

“In the end, it ended up taking me out.

“I think I finished up there halfway through a race meeting at Townsville in 2016 or ’17 or something, with double pneumonia, just collapsed, and it was just pure exhaustion.

“It’s just your body saying, ‘What are you doing to me?’

“I ended up stuck in Townsville for six weeks in hospital, it was just a shutdown effectively just because we’d gone so hard to get it happening.”

Hay’s professional itch was scratched by the results obtained courtesy of his hard work, while personally there were benefits too.

When Russell Ingall won the championship in 2005, a heavy night of celebrating led to an awkward but life-changing exchange the following morning.

After Ingall closed out the title in Phillip Island, Hay and his colleagues proceeded to hit the town with the trophies.

“We put probably $500 worth of rum and Coke through it, at the Isle of Wight pub at Phillip Island after we’d won,” he remembered.

“Going home, (I) managed to trip and fall on it, and cave-in one of the arms on it.

“So, I had to give those trophies back to a lady called Jenny Thompson, that was one of the representatives from CAMS, to represent them at the dinner the next night.

“So I met this lady, Jenny, and obviously the next morning, sick as a dog, and presented her two trophies that the rum had eaten all the shine off them, and one ear was busted.

“It was the end of the world.

“She had to go off and frantically find the blokes that built them, and get it fixed up for that dinner that night, and then we got to present it to him again.

“So, we went on and just drank out of them again and whatever, and then I had to give them back to her.

It was more than just two wild nights of celebrations though, with Hay now married to Thompson.

“She went on to work at Stone Brothers for a short time, and then back at CAMS or whatever, but the initial introduction was as a direct result of Russell winning, and obviously me getting drunk!”

Hay’s stories are almost endless, and most can’t be reproduced in print, but highlight a career spent at the top of Australian motorsport; working hard and playing harder.

He’s proudly old school, boasting a win at all costs mentality but willing to help anyone that needs it – including his rivals.

Today he’s no longer working in the Supercars paddock full time, instead plying his trade with Melbourne Performance Centre along with other interests Porsche, which includes coaching drivers.

There was even a plan to run in the Creventic series throughout Europe and the United States in 2020. That, obviously, didn’t happen and the plan is now to revisit that project for 2023, when the world has calmed down.

That doesn’t mean he’s been lost to touring car racing forever, however. Once a racer, always a racer.

“I like the role of an active hands-on, chainsaw juggling, team manager,” he said.

“I’m very team and workshop orientated, so I’m not the guy that sits in the glass office and looks down and sends memos, and shooting down to the boys at their computer at the ground.

“I’m in there with them at the ground level, and maybe that could have come against me, possibly in a few different positions that I could have gone to because of that, but that’s my style, where I like to be.

“After Jimmy Stone thing, I like to be one of the boys. That’s very important.”