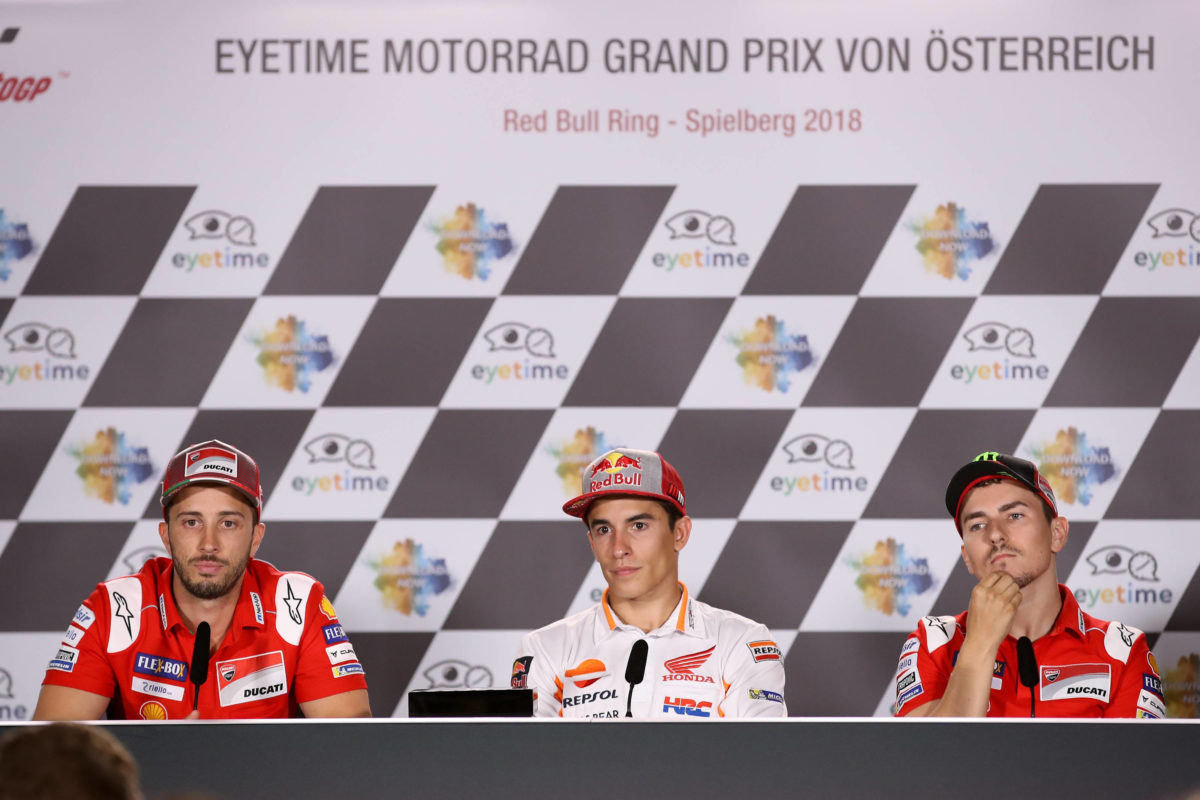 (left to right) Andrea Dovizioso, Marc Marquez, and Jorge Lorenzo at a press conference in 2018

Jorge Lorenzo has hit out at former team-mate Andrea Dovizioso after the latter suggested that the Spaniard may still dislike him due to being beaten by him.

The two shared the Ducati Team garage for two years, in 2017 and 2018, following Lorenzo’s big-money switch from Yamaha.

However, in each of those seasons, it was Dovizioso who finished runner-up in the championship to Repsol Honda’s Marc Marquez.

In a recent television interview, Dovizioso said that Lorenzo “still doesn’t like me, that’s for sure,” and raised the fact he beat the three-time premier class world champion on the same bike as a possible explanation.

A stinging response followed in a Q&A via the Spaniard’s Instagram story. 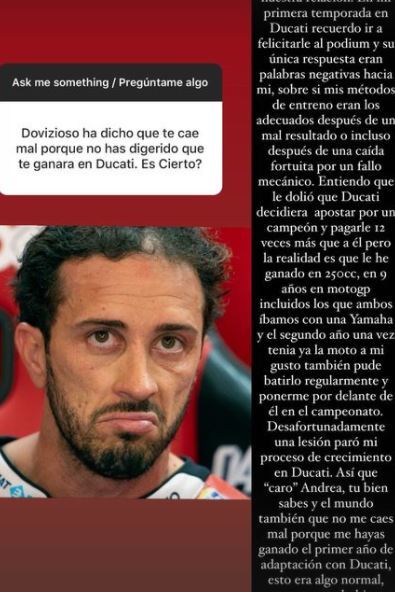 “He was jealous of me since the 250 days, but I still wanted to give our relationship a chance,” wrote the two-time 250cc world champion.

“During the first season at Ducati, I remember congratulating Andrea on his podium finish and his response was only negative words towards me.

“I understand it hurt him that Ducati decided to bet on me, paying me 12 times more,” added Lorenzo.

“But the reality is that I beat him several times in Moto2 [250cc], while after nine years in MotoGP, including the seasons we raced on a Yamaha, not forgetting my second year in Ducati, where I was able to beat him regularly and stay ahead of him.”

Lorenzo struggled in his initial season with Ducati and, ironically, was announced as a future factory Honda rider just days after his first of three wins on a red bike.

He would overtake Dovizioso in the championship with the latter of those victories, at the Red Bull Ring, but a combination of mistakes and a mechanical failure-induced crash led to injuries which saw him only gather four points in the final eight rounds of 2018.

“Therefore, ‘dear’ Andrea, you know very well, like the rest of the world, that it is not true that I don’t like you, since you only beat me in the first year of acquaintance with Ducati.

“It was something normal, as was the fact that it would have been if I had beaten you by staying with Ducati for the following years.

The barb follows another from Lorenzo about his replacement as Yamaha’s European test rider, Cal Crutchlow.

On that occasion, the Briton was said to be capable of testing how tough the Iwata marque’s bikes are given his propensity for crashing.

Dovizioso, meanwhile, also opined on the talents of Casey Stoner and Marc Marquez in that same interview, venturing that the Australian may have been more talented than his successor at Honda.

Stoner and Dovizioso were team-mates at Repsol Honda in 2011, before the Italian moved to then Yamaha satellite squad Tech3 and eventually the Ducati Team.

He opted not to renew and, as it stands, will take a sabbatical from MotoGP next year.