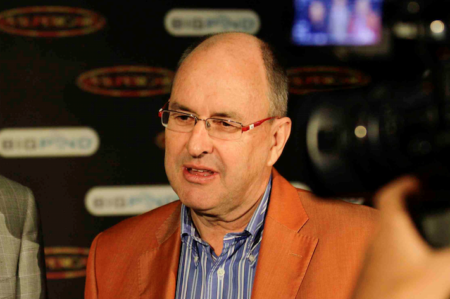 Tony Cochrane during his time at Supercars

A company of former Supercars Chairman Tony Cochrane has been put into liquidation.

International Entertainment Consulting Pty Ltd was established by Cochrane and his wife Thea Jeanes-Cochrane after he ended his role as Supercars head in 2012.

It is believed that several identities from Australian motorsport were investors or had a connection to the company which had a receiver appointed by one of the company’s secured lenders earlier this month.

Concert promoter and owner of Ticketek, TEG Live, is believed to have had a substantial stake in the business.

Said Jahani and Philip Campbell-Wilson from Grant Thornton have been appointed to handle the liquidation.

IEC’s biggest claim to fame was developing The Rolling Stones exhibition in London before touring several cities of the world, including Sydney.

The exhibit included more than 500 objects and artefacts hand-picked from the band’s warehouse.

The exhibit, which included about 500 objects from the archives of Mick and boys, opened in London in 2016 and then toured about a dozen cities around the world, including Sydney two years ago.

Cochrane has been in the show business industry in the 1970s and worked with some of the biggest names in the business including The Rolling Stones and Frank Sinatra, who he famously got to open Sanctuary Cove resort in 1988.

He worked with IMG in the 1990s and was one of the creators of Sports and Entertainment Limited, which was a driving force behind the development and promotion of V8 Supercars.

Cochrane is the current Chairman of the Gold Coast Suns in the AFL and Jeanes-Cochrane is a board member of Motorsport Australia.

While IEC is in the hands of the liquidators, Cochrane still controls Cochrane Entertainment, which recently handled the pregame and half-time shows for the AFL Grand Final at the Gabba.

“Tony has made the stage his own from the Gold Coast in Australia – not only with the formation and execution of V8 Supercars, but along the way he has collected a Tony Award (for excellence in American Broadway Theatre), a couple of ARIA’s, three platinum albums, and is internationally recognised for his efforts in taking V8 Supercars to the world.

“Over the past forty-five years, Tony has produced and promoted over 400 sporting and entertainment events throughout the world, sold in excess of 25,000,000 tickets with gross sales exceeding two billion dollars, and written nearly $250,000,000 in sponsorship sales.”

Cochrane also chairs the Aus-X Open motocross business which has been successfully developed by Ryan Sanderson and Adam Bailey at AME Management.

The IEC website seems to have been shut down.