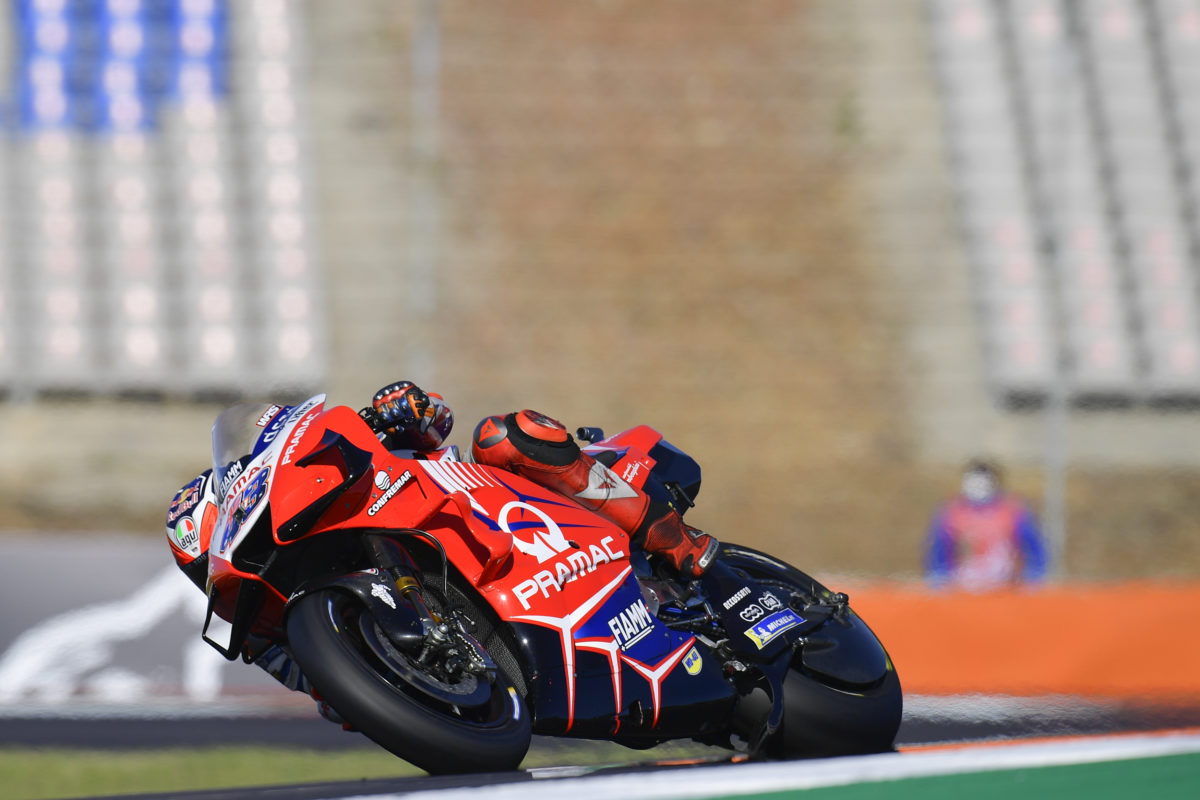 Miller and Francesco Bagnaia both make the step from Pramac Racing to the factory Ducati Team next year after the former finished a career-best seventh in the 2020 title race.

The Australian amassed one less podium than in the season prior, but three of those four were second placings as compared to five third placings in 2019, and the premier class had five fewer races than in 2019 due to COVID-19.

Those second placings also represent Miller’s best results in dry weather, and the cumulative deficit to the race winner in the first two was only 0.409s.

Crutchlow, who has retired from full-time racing and will be a Yamaha test rider next year, believes the 25-year-old can challenge for the title in 2021.

“From my side I want to see Jack win,” said the now ex-LCR Honda rider.

“I think he proved he’s been able to go for it. He’s gone for it in these last races again.

“There’s no reason he can’t go for the title next year. I look forward to seeing Marc (Marquez) come back as well because he’s been dominant so much over the last year and he deserves to be on the grid.”

Marquez, whose six premier class crowns to date came in the seven seasons prior to 2020, is doubtful for the opening races of the 2021 campaign after undergoing a third operation on his right arm.

The Repsol Honda rider’s absence from all but one race of the past season, namely the fateful Spanish MotoGP, was often cited as a reason for the multitude of grand prix winners, including by Casey Stoner.

All told, there were nine distinct winners of the 14 races of 2020, with the only repeat victors being SRT Yamaha team-mates Fabio Quartararo and Franco Morbidelli (three each), and Red Bull KTM Tech3’s Miguel Oliveira (two).

“Carmelo (Ezpeleta, Dorna CEO) has done a fantastic job of the rules to make the racing this close and this competitive and the battles throughout the field. Everybody has a good bike now.

“Some riders can ride with the new tyres, some riders can’t, but the people who struggled with it will maybe grow up with the tyre a little bit more and be able to be more competitive.

“Essentially this year, for 14 races you’ve seen some great racing throughout the year and I’m sure you’ll continue to see that next year, even if it’s a normal championship as such.

“But I believe you’ll have a lot of different winners.”

The first official activity of 2021, per the provisional calendar, is the Shakedown Test at Sepang on February 14-16.