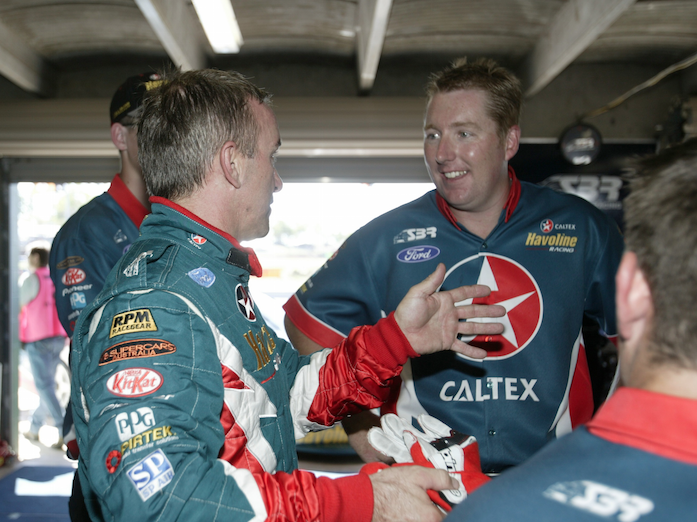 Finding time to chat with Barry Hay is easier said than done at the moment.

The former Stone Brothers man, who helped Lucas Dumbrell Motorsport to an unlikely win in Adelaide with Nick Percat, is busy. Really busy.

Much of the world may have slowed down due to coronavirus and Christmas, but Hay’s foot remains firmly on the throttle, burying it into the firewall heading into the new year.

Though no longer a fixture of the Supercars paddock, he remains actively involved in national level motorsport.

He also has interests in the automotive sector, and has been working with Porsche to develop a product for the Taycan, which hits Australian showrooms early next year.

“I still am actively doing things for MPC (Melbourne Performance Centre), because I like working with those guys, because they have obviously every category in the world running out of their workshop, and they run a very, very professional operation,” Hay told Speedcafe.com.

“They’re more professional than anybody else in the business by a very long way.

“So, I always do the 12 Hour with them, and I’ll be doing stuff with them again next year, in between doing this Porsche thing, because they’re very good to work for.

“It’s a good level to work at. You don’t feel like you’ve gone to club cars, you still feel like you’re in the very big league, but just with a little bit less pressure. So, I’m doing the MPC thing.

“I’m doing the Porsche stuff, and I certainly enjoy more the driver coaching part of it.

“Porsches aren’t particularly technical, they’re pretty basic actually, but that makes them good from a training point of view, because a result in Porsche is a driver result.

“And that’s the big thing that sort of is the difference between, say Porsche and Super2.

“Super2, the blokes that win is if you’ve got the car that was winning of that era, when it was a main game car.

“I don’t think a result in Super2 represents necessarily the best talent, whereas the good thing about Porsche is, they’re all so close, so controlled, very minimal adjustments, that you can see whether your driver’s improving or not.”

When it comes to talent, Hay knows his stuff.

He’s worked with Marcos Ambrose and Russell Ingall, winning championships with Stone Brothers where he was a large cog in what was, at the time, the powerhouse Supercars team.

Not bad for a kid who grew up in the shadow of a superstar father.

“I come from a motor sport family,” Hay explained.

“My dad was quite big in powerboats, he used to race hydroplanes.

“I’m from Queensland originally, and he was sort of the gun guy up there when that was happening over probably a 10 year period.

“There was even a thing called Champion of Champions, which was sort of a culmination of everything, that everyone used to get together in one particular time, and he won that three years in a row.

“He was a bit of a superstar in that.”

His father’s involvement in powerboats more or less steered Hay towards a career in the sport, taking up an apprenticeship building racing engines for boats.

However, Hay’s parents put one stipulation on him; that he serve his final year in a car dealership.

“I actually wanted to be a copper, to be quite honest, but I just sort of got towards the racing thing and I ended up leaving school and doing my apprenticeship with a bloke called Mick Atholwood, who was a bit of a legendary engine man.

“So the racing thing just was a continuation of my dad and my uncles, that was just how it was.

“You know how you get families that everyone was a footballer, or everybody was a whatever? Everyone was a racer in my family.”

The final year of his apprenticeship proved pivotal as he made contacts throughout the automotive industry, especially with HSV.

“When I started my apprenticeship, I did it obviously in a race engine shop, but the deal I did with my parents, the only way they’d accept that, was if I did my last year in a dealership so that I’d actually learn about cars,” he explained.

“When I did that and went across, it was just as HSV came out, very early, so the dealership guys didn’t know what to do with the HSVs.

“So Walkinshaws were there, it was the last of the Brocks, those VL Brocks and whatever, and the dealership guys had no clue.

“I’d just sort of come straight from a race shop. I had good skills, so I ended up going there to do that, but I ended up working for HSV as their troubleshooter for Queensland for that next couple of years.

“That’s how I got to know John Harvey, because John Harvey was in charge of sort of the top end of HSV and also the lease engines for Holden Racing Team at that stage,” Hay added.

“So we’d obviously go down to do training and that’s how I met Jeff Grech and just basically badgered the shit out of him the whole time.

“So every time I’d sort of go down and hassle him and at the same time, I was sort of hassling Tony Longhurst, Ross Stone; I was just badgering all of them just to try and get back into racing.

“It was quite hard to do.

“The big difference now that stands out a lot too, like when I tried to get into racing is that now it’s a little bit – and I’m not talking about the top 15 or 20 percent in a race team, I’m talking about the guys underneath, on the floor or whatever – because of the way the world’s changed I guess, and racing’s changed, it’s a bit like the French Foreign Legion; they sort of take anybody and then they just sort of weed them out.

“They just get blokes from dealerships and blokes from workshops, and they just take anyone and they sort of filter them.

“Back then, you had to be very good. There was minimal spots. All the guys that were in there were very good at what they did, and the turnover was just about nil.

“So to try and get into racing at that stage, you really had to work hard and hammer the shit out of somebody and be in all the right places and do the work for free and travel in the truck.

“It really was quite difficult to get into.”

Eventually a door opened, and Hay found himself working for the one-car Paul Romano operation.

“That was certainly stepping off the deep end,” Hay confessed.

“In as far as in those smaller teams, you did the gearbox, the uprights, you built the whole car yourself, welded up the radiators, whatever.

“Now they pull the cars apart and put them on trolleys and send them all into their different rooms.

“And that’s why even the endurance racing back then, at Bathurst or whatever, every time you finished a Bathurst and you know you personally effectively built everything in that car, it was pretty rewarding.

“So going to Bathurst, there was a lot of things like the gearboxes and the diffs and stuff like that, that I’d never done before.

“Actually Dick Johnson’s brother, Dyno, I sort of had known Dyno from around the traps, he helped me with quite a bit of that stuff, like just on the basic setups and to get it all rolling.

“So I’ve been really lucky that I’ve had a lot of good people around me that I’ve been able to learn off the whole way through.

“And I mean, anybody that knows about Romano, that’s just an experience in itself.

“He’s an interesting character and there’s not many; they don’t make them like him anymore.

“So that was a one-car team and it was a privateer team, we had the factory Bridgestone tyres, so we did a lot better than we probably should have.

“It was probably the best learning experience I could have done because I was in the deep end, that set me up to get into Stone Brothers.”

The move to SBR proved a watershed moment, helping define Hay’s career and shaping many of the habits he carries with him today.

Between Hay and Nathan Leitch they steered Ingall to a Supercars title and a host of race wins.

It was hard work, with countless all-nighters that left even the likes of Roland Dane raising their eyebrows at how hard they worked, but such was the determination and innovation in the squad.

That experience has resonated through the rest of Hay’s career, and was critical in his time with Lucas Dumbrell Motorsport.

It’s also courtesy of his role at SBR that Hay met his now wife, in rather unusual circumstances after a night out celebrating, a story recounted in Part 2 next week.

In Part 2, Hay shares his insights into what made Stone Brothers Racing the force it was, and the legacy it has left on both him and the broader motorsport industry in Australia.