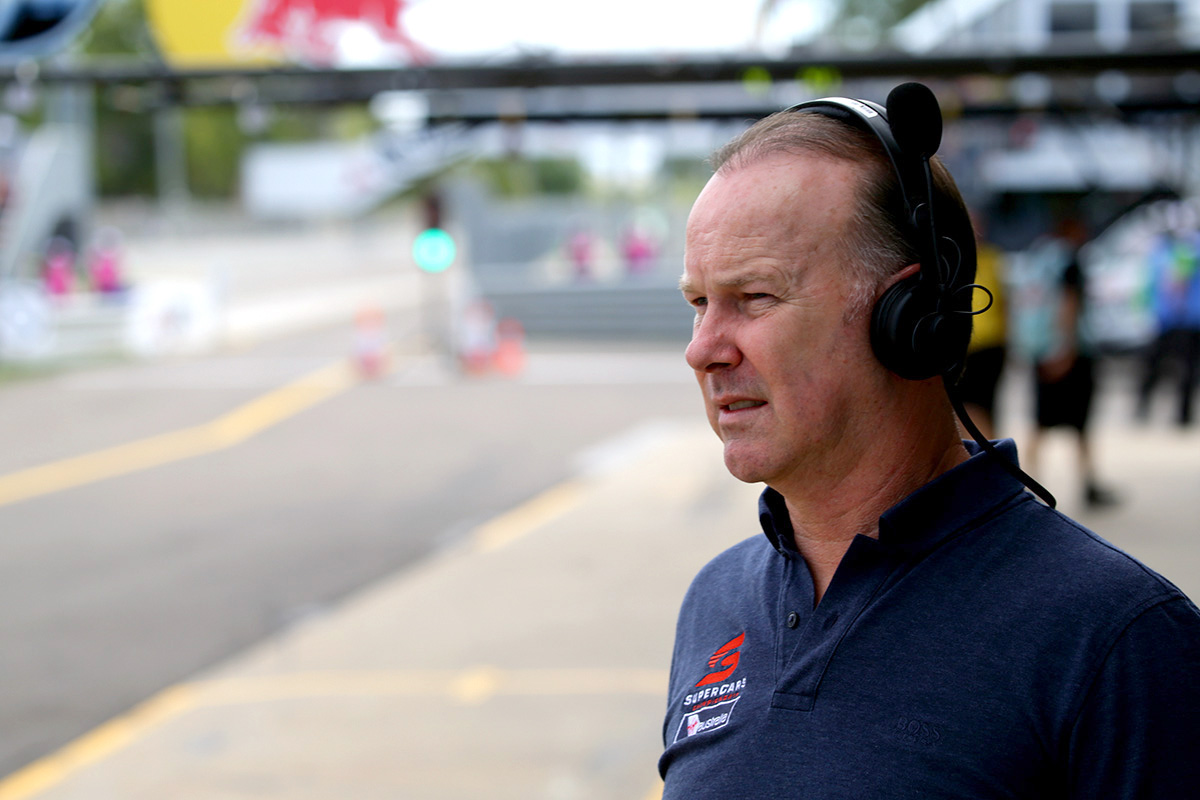 Supercars management seem to have done a backflip on their axing of Mark Larkham from their 2021 broadcast team and are wanting to discuss reinstatement.

Larkham was officially axed from the broadcast on Friday and an avalanche of fan disdain has flowed constantly ever since.

Part of the fan backlash has included an online petition at Charge.org which has attracted more than 22,750 signatures.

The real indicator of Supercars’ U-turn is a generic response which is now issued to anyone emailing or calling the Supercar head office.

The response, which was posted by a fan overnight and which has been confirmed by Supercars as being legitimate, reads:

Thank you for your feedback regarding Mark Larkham’s departure from the commentary team.

We are sorry to the fans who are all very disappointed.

We’re overwhelmed by the support of Mark Larkham from our fans.

We have heard you and will come back once we have had the chance to discuss with Mark.

Sean Seamer is aware of the emails and calls we’ve received.

I will continue to communicate your concerns and support for Mark to management, 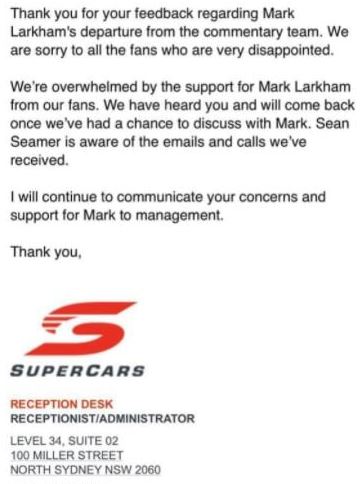 Supercars’ response to a fan email

The preparation of such a generic response from an unidentified person would indicate the organisation’s headquarters has been inundated by fans wanting to let their opinions be known.

The structure of the electronic reply would also indicate that the fans have identified Supercars CEO Sean Seamer as the instigator of Larkham’s fate and the person who needs to fix it.

It is believed that Supercars made an effort to reach out to Larkham yesterday with no success.

While Larkham issued a statement to the fans via Speedcafe.com yesterday stating that he accepted Supercars’ decision, it would be difficult for the 2019 and 2020 motorsport broadcaster of the year (as voted by his media peers), not to be disillusioned.

“I am sitting here dropped on my arse simply gobsmacked as I write this, and with my hand firmly on my heart I am truly, deeply, deeply humbled. I teared up – shit, how can one not be affected by the volume of comments and kindness – utterly blown away is an understatement. So thank you,”said Larkham in his message to the fans.

“To put concerns at ease, whilst yes, the decision was a bit of a shock, I both accept and respect Supercars position to pursue a different route and change the primary broadcast team, rightly or wrongly, they will have no other desire to do anything other than what they believe is best for the growth of the sport.

“So it is not for me to publicly agree or not, what I think is not relevant – what you the fans think, of course always is, and I do hope Supercars find a way to cater for your obvious thirst for information in the broadcast, your voice is clear.”

Larkham was with Channel 7 from 2007 to 2014 and was controversially shuffled sideways to Network 10 and RPM when a deal was struck with Fox Sports in 2015.

He rejoined the main telecast in 2018 where his popularity has grown through his ability to take technical issues and break them down into easily digestible bite-sized pieces for the average viewer.

It is believed that part of the reasoning for Larkham’s axing was that Supercars management wanted to ‘dumb down’ the telecast and make it less technical moving forward – another point which has infuriated the fans.

Rumours of Larkham’s demise have been around for a couple of months before Friday’s official announcement.

Larkham has said that Supercars’ decision to continue without him has already accelerated his desire to expand his own corporate video business with his eldest son.

Despite the backflip, there is every indication that the resurrection of the Larkham relationship is possibly irreconcilable.