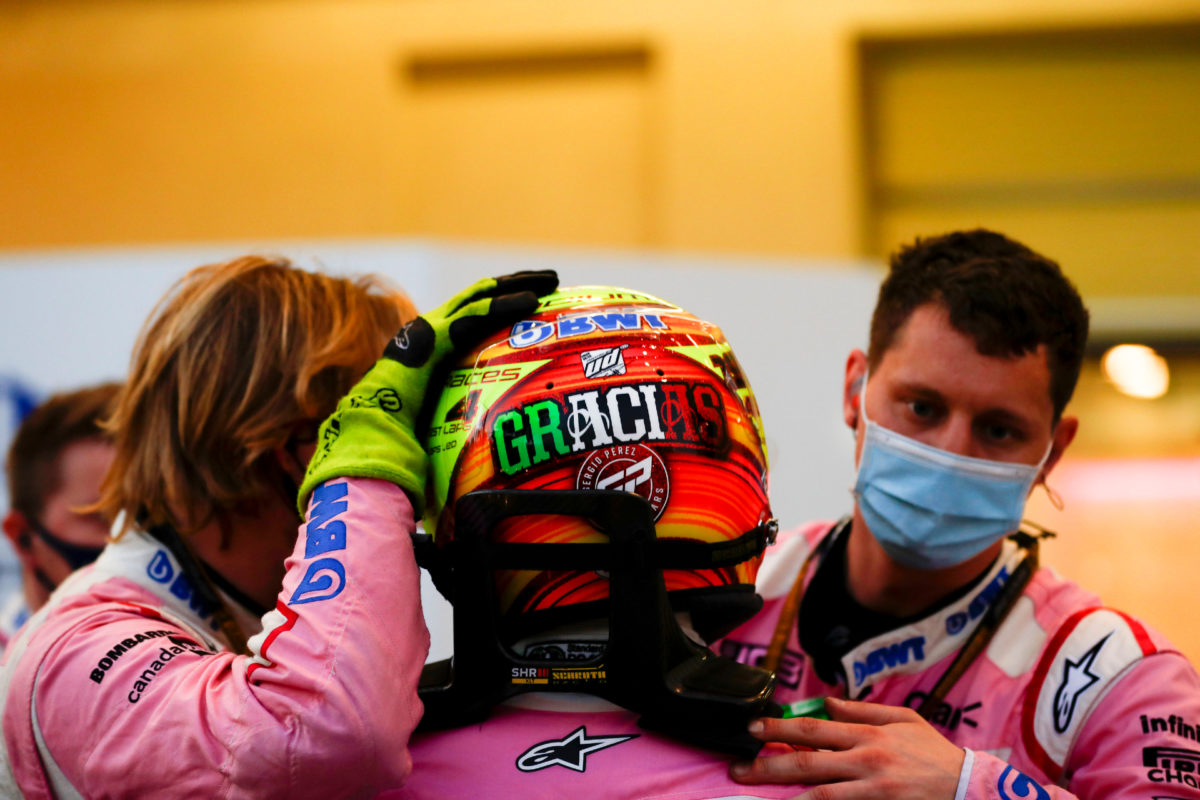 Fresh off a maiden victory at the Sakhir Grand Prix, Perez started from the rear at the Yas Marina Circuit after a grid penalty was imposed for a fourth new internal combustion engine, turbocharger and MGU-H.

The Mexican powered through the field in the opening laps before his RP20 came to a spluttering halt in the final sector, in scenes reminiscent of his late Bahrain Grand Prix retirement.

Perez waved his arms in disgust at the retirement, which triggered a Safety Car barely a fifth into the race, before he returned to the garage and consoled his distraught mechanics.

With Perez failing to score and Lance Stroll only managing 10th, Racing Point ceded third in the constructors’ standings to McLaren.

Speaking after the race, Perez couldn’t hide his disappointment.

“I’m really sad that my final race with the team ended so early and with a repeat of the engine problem we had in Bahrain,” he said.

“I really wanted to sign off with a strong race for everyone in the team. I hope people remember winning the Sakhir Grand Prix instead of this weekend.

“Looking at the bigger picture, it’s a real shame to have retired because we needed to get both cars into the points today to take P3 in the constructors’ championship.

Perez’s future is yet to be confirmed, with a 2021 sabbatical or Red Bull seat his likely options for next season.

The 30-year-old has earned support from his rivals, with Ross Brawn also stating it would be a “tragedy” if Perez missed out on a seat.

While at peace with his future, Perez was pleased to clinch his best season finish in his 10th season in Formula 1.

“I think we can still be very proud of our season. We won a race, took podiums and were just so unlucky in some situations… especially with both drivers having to miss races,” he said.

“On my side, I’m delighted that we were able to get P4 in the drivers’ championship.

“This season has been really special, but I’m ready for a break now and I’m very much looking forward to the future.”

He also admitted Perez’s DNF all but ended the team’s hopes of defending its 10-point lead over McLaren heading into the race.

However, Szafnauer was pleased the team secured some key results ahead of the 2021 arrival of recruit Sebastian Vettel and rebranding to Aston Martin.

“We will take the disappointment tonight in our stride and focus on the positives of an incredibly strong season where we enjoyed some great moments,” Szafnauer said.

“We have shown that we have a competitive car and team, which will give us a great base to come back even stronger in 2021 under the Aston Martin name.

“A big ‘thank you’ to everybody in the team for their huge efforts and a fond farewell to Sergio after seven years with the team. We wish him all the best for the future.”