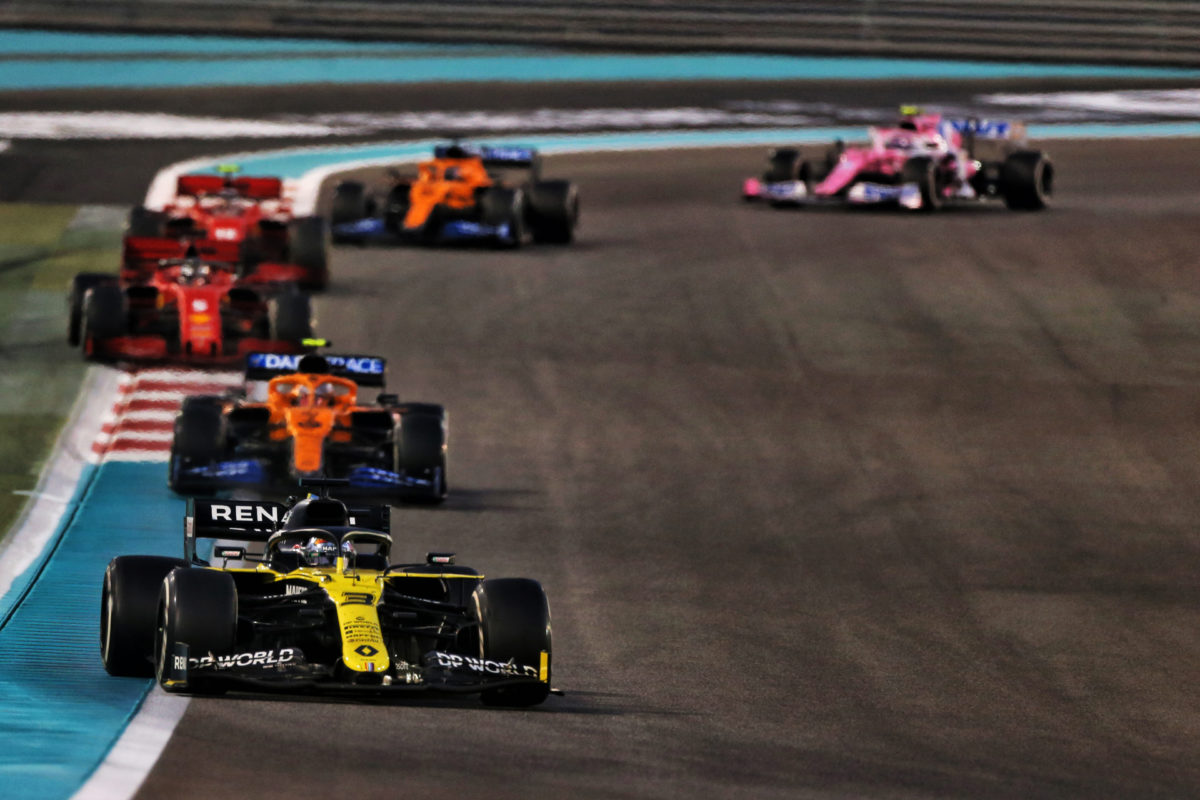 Daniel Ricciardo ended his two-year Renault stint with a strong drive to seventh in the Abu Dhabi Grand Prix, with the Australian “proud” of his second season with the team.

The McLaren-bound driver rose from 11th on the grid to seventh at the chequered flag at the Yas Marina Circuit following a 39-lap first stint on the hard tyres.

Ricciardo opted to stay out when the Safety Car was deployed on Lap 11, with many of his rivals pitting ahead of him.

Despite others being on quicker rubber after the restart, he managed his tyres and only dropped from fifth to seventh once he made his sole pit stop of the race.

A lonely end to the race followed as he chased McLaren’s Carlos Sainz, but the Aussie managed to clinch a final fastest lap bonus point of the year on the last lap of the race.

While disappointed he was unable to overturn the deficit to Racing Point’s Sergio Perez for fourth in the drivers’ championship, Ricciardo was pleased to mark his final Renault appearance with a “sentimental” performance.

“(The hard tyre stint) was really important, it set up the race,” he said after the race, which was won by Red Bull’s Max Verstappen.

“Last night we weren’t convinced on starting on a hard, but today we came around to the idea. Obviously it was the right call.

“I didn’t know if the Safety Car was going to hurt or help us, but I was able to hold off the guys on the new tyre, settle into my rhythm and pull the gap. It was nice.

“I know I just get a point for fastest lap, it doesn’t change the championship but I think, just the way to send off these two years at Renault, being the fastest till the very end, that was just a little sentimental value there.”

Ricciardo paid tribute to Renault, with team boss Cyril Abiteboul praising the driver’s crucial legacy ahead of the team’s shift to Alpine in 2021.

“Last year had some highs but there weren’t enough of them and we did feel that that last year was an underachievement so to turn it around this year, it was strong and we were proud,” he explained.

“We did obviously just miss out on fourth in constructors’, but fifth in drivers’, I’m really happy personally. It was a really strong year.

Ricciardo’s first season at Renault saw the 31-year-old finish no higher than fourth in a race as he slumped to ninth in the standings.

However, despite an improved 2020 campaign – which included two podiums and 11 straight points finishes to end the season – Ricciardo admitted he was ready to wind down amid the truncated COVID-19-affected season.

“This was an intense six months,” he said.

“I loved it, but it was intense. If you told me we had another race next weekend, I don’t know if I’d be that excited so I’m really glad it’s done now.

“I just want to lay on a couch for a week and not do anything.”