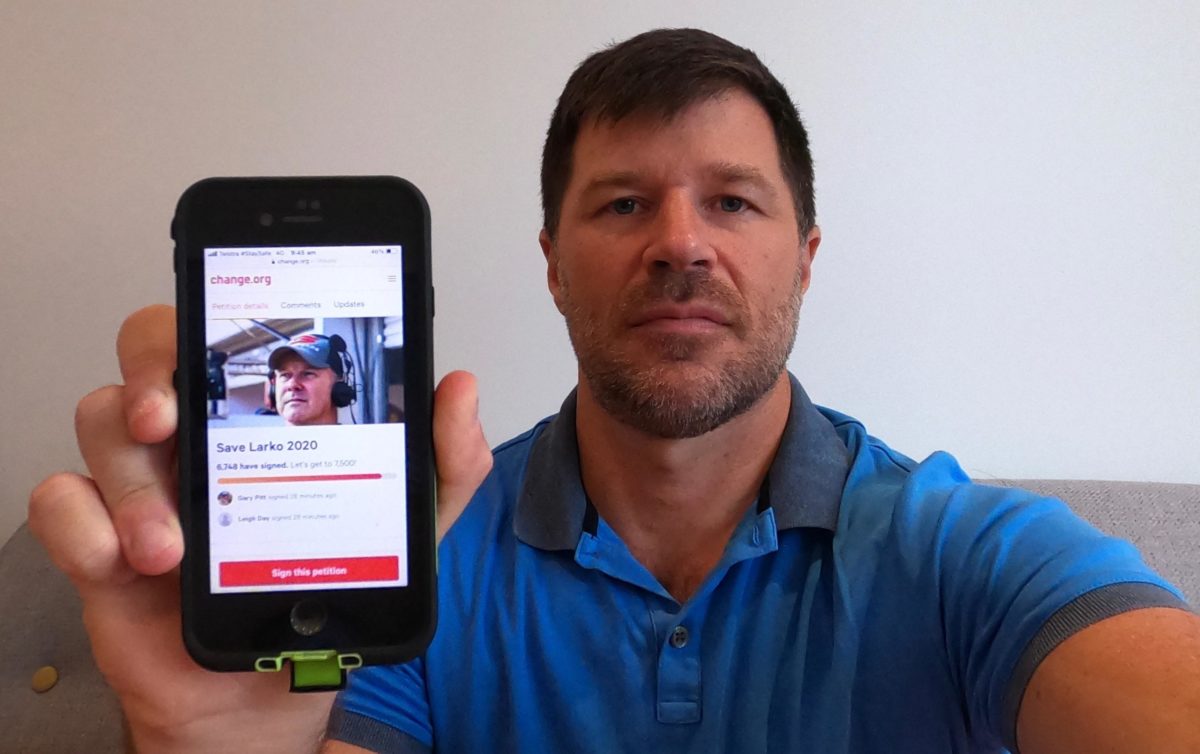 The axing of Supercars stalwart Mark Larkham from next year’s television broadcast has resulted in one of the biggest fan backlashes in the sport’s history.

Since the demise of Larkham was published on Friday, there has been a tidal wave of anti-Supercars sentiment with some fans going as far as suggesting a boycott of the sport’s new naming rights sponsor Repco and broadcasters Foxtel and Channel 7.

Some discussions even suggested the erection of protest billboards aimed directly at Supercars’ head office in Sydney and the use of sky writers at championship events through the year.

All indicators suggest that the decision to cut Larkaham was based on an opinion that the current telecast is too technical and that it needs to be dumbed down.

Part of the fan revolt has been led by Gold Coast fan Mark Doust, who wasted no time setting up a ‘Save Larko 2020’ campaign on petition website Change.org as well as a Facebook page.

At the time of writing, the petition, which has been targeted at Supercars Australia, Channel 7, Foxtel and Kayo, had received more than 7000 signatures.

Anyone wanting to sign the petition can do so HERE.

The call for Larkham’s return has also gained traction on social media, courtesy of the #BringBackLarko hashtag, driven in part by Doust’s petition.

Despite the thousands of comments across all forms of online media, there has yet to be one spotted in the favour of the Larkham axing, while many are extremely critical of Supercars’ boss Sean Seamer, who has driven the decision.

Doust, an articulate 43-year-old emergency services worker, says his personal level of protest was “out of character”, but he felt “something had to be done”.

“I have never done anything like this in my life before, in fact I actually had to Google everything to see how to set things up,” he admitted to Speedcafe.com.

“I am anything but a disrupter, or whatever you want to call it, but at the end of the day something has to be done and surely the reaction to these pages and things like your (Speedcafe.com) stories tells Supercars that the decision needs to be reversed.

“I have been a fan of this sport for more than 35 years in its different forms and in recent times the thing that has kept me engaged is Mark Larkham.

“Through the parity, tyre and COVID discussions, Larko has provided explanations which have given the average fan a digestible insight into what is actually happening.

“He is relevant, reliable, passionate and the fans can relate to him.

“The fans have sat back and taken a lot over the years, but I think they are sick of it and this insane decision has tipped them over the edge.

“It will be interesting to see if Supercars are actually listening and do something about it.”

Doust, obviously a rational and educated fan, had some interesting insights to the current debacle and the future effects it could have on the sport and its stakeholders.

“No one in their right mind could ever see this coming,” said Doust.

“They should be increasing Larko’s airtime, not decreasing it.

“Not only that, this decision has taken all the oxygen out of everything they (Supercars) do from now on in regards to new TV talent for the series.

“Those new people might have something fresh to offer and do a good job, but they will be seen as responsible for Larko not being there and will be unfairly smashed.”

“Save LARKO 2020′ campaign relates to the axing of Mark Larkham from the Supercars Australia commentary team. Fans know Larko is a large part of the series institution, and love his technical and general commentary presented in a way that we all understand. The survey was created by an everyday fan that is tired of seeing Supercars being destroyed, one poor decision at a time. LARKO is everything Supercars should be. Supercars, reinstate LARKO, and if anything, give him MORE AIRTIME. Follow Save Mark Larkham 2020 on Facebook for updates.”

“I’m signing because Supercars have finally stepped over the line by admitting to “dumbing down” their broadcast and getting rid of the only interesting commentary segment. I can’t believe how dumb Supercars thinks fans are. This is an insult to all fans”. – Liz Clare, Callaghan, Australia.

“Larko not only gives balance being a Ford guy he is entertaining brilliant at explaining the technical side of the sport and was voted broadcaster of the year for V8s so why would he be moved on totally disregard for the most important stakeholders of the sport THE FANS” – Tony Rutledge, Australia

“Mark Larkham is an icon of Australia’s motor racing and another asset of the sport that has been victim to greedy television networks and out of touch motorsport bosses. – Jake Christison, Australia.

“I would like Larks to stay because he is the best when it comes to explaining how cars work and all the Important things that come to racing. Please keep Larks on. A fan from New Zealand- Michael Hempel, New Zealand.

Just a small sample of some of the Social Media comments:

The guy was the best pit lane reporter in the business in my opinion. If it wasn’t done for reasons that haven’t been made public it makes no sense

Hey Supercars, With you not resigning Riana & Larko you can shove your new Repco Supercars hashtag where the sun don’t shine. #VASC #BringBackLarko #BringBackRiana You’ve made a very VERY bad call. Our sport doesn’t need or want the “ummers” and “arrrrrers” Bad call indeed.

Gotta say @supercars getting rid of larko is a true showing of how little they understand the fans. Not sure ill continue my foxtel subscription next year. #BringBacklarko