MECHANIC: Steve Hallam, from Senna and Alonso to Supercars and NASCAR

MECHANIC: Steve Hallam, from Senna and Alonso to Supercars and NASCAR Ayrton Senna with the Lotus crew, including Steve Hallam on the right in the yellow cap

The world of motorsport is a high pressure industry which affords little time for reflection.

It’s probably just as well for Steve Hallam because his career, which spans more than three decades, has covered some of the most important technical developments and seen him work alongside some of the sport’s biggest names.

He has the sort of inside knowledge you don’t come across every day.

Growing up in the UK, Hallam set his sights on a career in motorsport from an early age. He studied Automotive Engineering before taking a job with Aston Martin at the end of 1975, remaining there until 1982 when the opportunity came to move into Formula 1.

“I was fortunate to get in at a very high level.”

His first race should have been the Argentinian Grand Prix, but with the UK at war in the Falklands it was instead the Brazilian Grand Prix in Rio de Janeiro.

“From that point onwards it was fun in capital letters,” he joked.

Together they recorded a third place at Rio, which would be the best result of a season punctuated by retirements for the Englishman.

Lotus finished just sixth in the constructor’s championship, which was ultimately won by Ferrari, despite the death of Gilles Villeneuve at the Belgian Grand Prix and the loss of Didier Pironi through injury only a handful of races later.

Though at times it dominated the sport, Lotus’ fortunes often wavered. As Hallam joined in the early 1980s the team was in a rebuilding phase.

Having last won the championship with Mario Andretti in 1978 it had fallen behind teams like Williams, which gained a better technical grasp of the ground effect concept.

By 1982 things were beginning to turn around and Colin Chapman, who died of a heart-attack at the end of the year, secured a supply of Renault engines for the 1983 season.

“There weren’t many choices but that was a good one,” said Hallam.

It was a catalyst for the team’s revitalisation, which didn’t really begin bearing fruit for two years, coinciding with the arrival of a young Ayrton Senna.

“(We) didn’t win a race but we were competitive. Then, in ‘85 when Ayrton joined us, we were very competitive and started winning races – we got a lot of poles as well.” 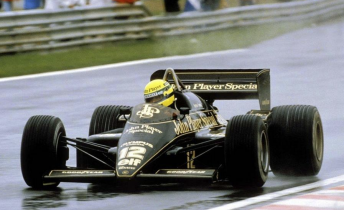 Advances in computers and microchip technology made Formula 1 a hotbed of development in the mid-1980s as new avenues for development that were previously never dreamt opened up for engineers.

Active suspension was a game changer, which was pioneered in Formula 1 by Lotus and came at a time when teams were running handgrenade turbo qualifying engines, often with well north of 1000 horsepower.

It was a golden era for the sport, one Hallam recalls fondly.

“Qualifying with turbo engines was pretty awesome,” he recounted.

While racing was the core business, Hallam derives just as much pleasure from the intellectual challenges competition presents.

The ceaseless development war which wages between teams pushes the best engineers forward, putting an emphasis on strong and robust engineering processes to maximise return on investment.

That was a crucial lesson.

“In those very early days it was genuinely paper based,” he explained.

“Then, as computing technology expanded into motorsport by the mid-80s, we had data systems, all be it crude, principally driven by the engine.

“As soon as we had the technology to carry a data system all the time, which was during 1985, it just opened the doors in terms of helping us understand what was going on.

“It’s how improvements to the car are created and what the process of doing it is. That was really quite fascinating.

“Sure, there are constraints on that, or boundaries, one of which is money, the other of which is a physical resources – have you got the man power can you make the component that you’re conceiving – and then how do you prove the concept before you commit to production and racing? There’s a lot going on.

“That is something that has stayed with me over the years, whether that was at Lotus or McLaren or in NASCAR or (Supercars); it’s understanding how to make cars go faster.”

Ground breaking developments were just part of the job and went by almost unnoticed; it’s only looking back that Hallam is able to appreciate what he was a part of.

“It’s not something that’s at the forefront of your mind when it’s happening,” he admitted.

“When you reflect on what you were doing it seemed that nothing was impossible. If you had the idea and could translate it into the hardware to go racing you could pretty well do it.”

The materials race in Formula 1 was particularly enjoyable.

McLaren introduced the carbon-fibre monocoque in 1981, the first team to move away from an alloy honeycomb tub.

Things reached their zenith in the late 1990s, by which time Hallam had left Lotus for McLaren.

“When Russia, or the Soviet Union, basically opened up there were agents going in and finding materials that were previously not commercially available,” he said.

“There was a particular alloy called aluminium beryllium, which was abbreviated to AlBeMet, and we got a supply of that and we started to make our brake calipers out of it.

“The braking performance of the car improved significantly because the calipers were not flexing to the degree that you were used to; the calipers were lighter; you could tune the brakes more precisely with smaller master cylinders and what have you.

“There were a lot of tricks you could play.”

AlBeMet was ultimately banned because, in dust form, it was carcinogenic, a move Hallam disagreed with.

“If you were going to machine that material you did it on a machine tool that had a housing around it and the dust was extracted and filtered and contained,” he argued.

“So the technology existed to machine it correctly but these were some of the arguments used against banning the material, which I think were a little bit over the top.”

It demonstrates how far teams will go to find an advantage, which in itself has led to some rather unusual games being played as they tried to conceal their developments from each other.

Hallam recalled one story during the ground effect era: “In the early days of ground effect people didn’t fully understand what was going on and I remember Colin Chapman telling me how we’ll just make a big song and dance about the diff.

“Anytime the diff came out of the garage it was covered up and people started to think there must be something going on.

“But to be honest the people that think that are the lightweights.

“The people that actually understand the cars know that there are no miracles. To achieve that level of performance it’s basically downforce.

“The data systems help now because you can look at your lap time and you can say okay based on the sector information I have of the other cars… I’m achieving these sector times and this overall lap time. In order to do their lap time, which is better than ours, and match their sector times I need this level of performance. If it’s all from the engine it’s unreasonable. If it’s all from this it’s unreasonable. It starts to focus your resource on areas of the car that you can improve.”

Having worked his way up to be head of McLaren’s race team, Hallam called time on his Formula 1 career at the end of 2008.

After starting at Lotus, and watching the team grow from 60 staff to more than 100 at its peak, he ended up with McLaren where he won world championships with Senna, Mika Hakkinen and Lewis Hamilton it wasn’t an easy decision, and only years of persistence and his own desire to test himself in a new environment drew him away.

“Life is just not physically long enough to get everything in that you want to do,” Hallam reasoned.

“I needed to do something else and to be sure that I could be successful at it.”

At the time Toyota was beginning its foray into NASCAR, and Hallam was headhunted to implement processes to help the development of its car at Michael Waltrip Racing. “They’re a very process driven company,” he said of Toyota at the time.

“The Technical Director at (Toyota Racing Developments) was a personal friend of mine from Formula 1 days and he started to twist my arm; ‘we need more process in NASCAR, we need more clear engineering thinking. It’s a great opportunity to have a lot of fun, work in the States, have a lot of fun’.

“Eventually he wore me down and I went and had a great time over there.

The experience reminded Hallam of his early years in Formula 1, as did his role in the Supercars paddock which saw him working at HRT (2012-2013) and then Tekno Autosports (2014-2015).

“(Supercars) reminds me very much of the 80s in Formula 1,” he suggested.

“You’re working with a small group of guys, you haven’t got a legion of trucks and motorhomes and what have you.”

Hallam admits he’d always kept half an eye on what was happening Down Under ever since his early days at the Australian Grand Prix.

“We used to watch Godzilla beat everybody,” he remembered.

“It was just wow, if they’re doing that down here imagine what it’d be like living here!”

While working within the Supercars paddock, he soon applied his experience in Formula 1 or NASCAR, and enjoyed being able to play a larger role within a team. He had a seat on the Commission and was involved in developing the Gen2 regulations.

His time in Australia was comparatively fleeting, heading back to the US in 2016 to take up a role with TRD which sees him based out of California.

He’s been there ever since, applying a career worth of experience in driving Toyota’s cause forward across an array of disciplines, from NASCAR to drag racing.

His career has been nothing short of extraordinary, winning races and world championships and transforming small single-car teams into a force at the front of the Supercars grid, but Hallam rarely stops to look backwards.