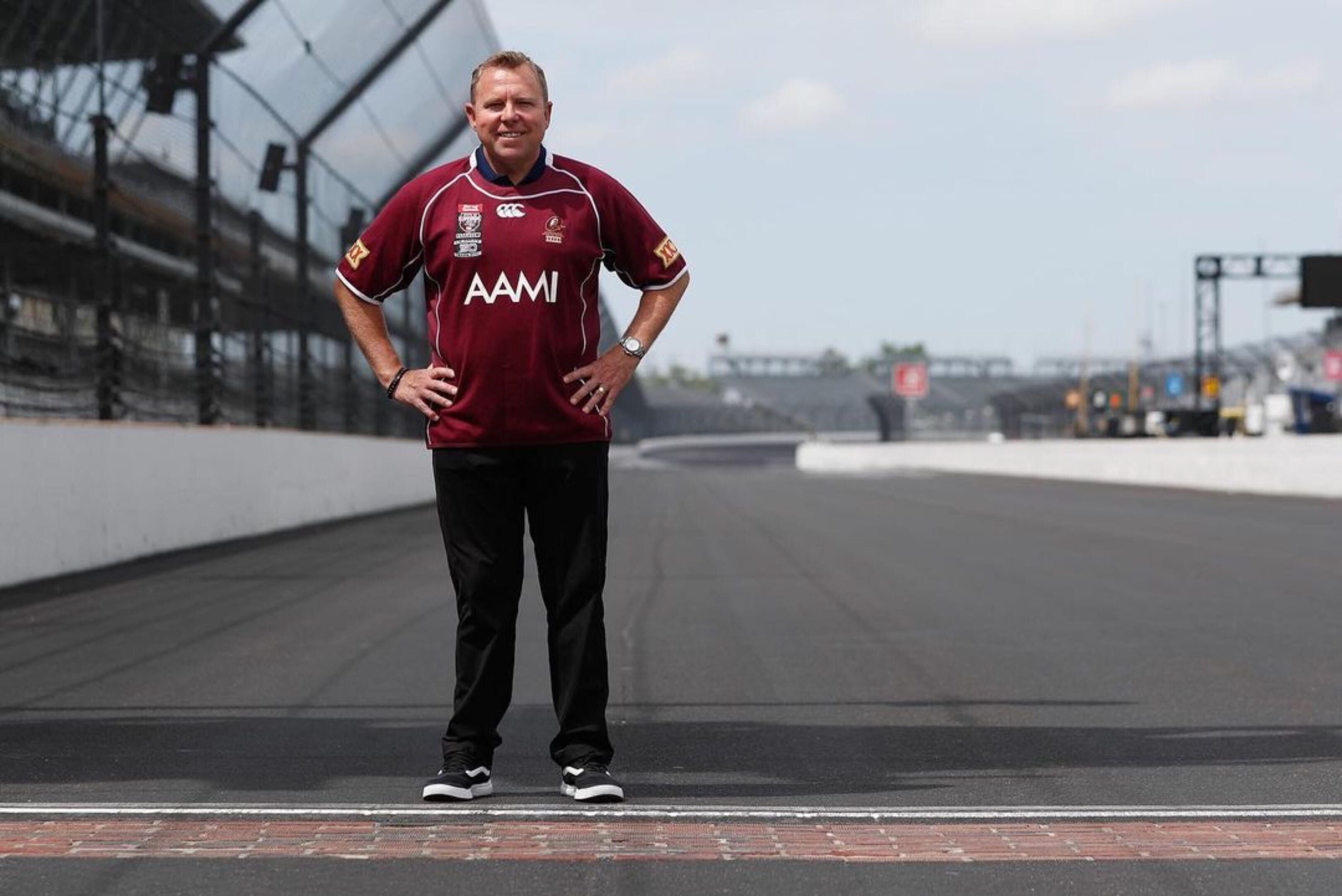 Today we look at chapter 18 Aussies Heroes, which considers many of the off-track Aussies and Kiwis at Indy, led by commentator Leigh Diffey who proudly became the first non-American to call play-by-play of the Indy 500 in 2019.

“This is the greatest spectacle in racing and today one of these drivers will do something we will never, ever, forget.” Turn Four, 33 colourful cars in perfect formation, a quarter of a million fans at the track, an average of 5.4 million TV viewers, peaking at 6.7 million, and the voice full of measured excitement, not overhyped but not under modulated, was calling the starters in the Indianapolis 500 down to the line. One chance to get it right. Timing—perfect. “Green . . . Green . . . Green.” In 2019, Leigh Diffey became the first non-US-born commentator to call play-by-play for the world’s greatest motor-racing spectacle. NBC Sports, America’s Olympic Network, had won the rights to the Indy 500 from ABC, which had held them for 54 years. NBC had appointed Diffey as its anchor. It seemed like only yesterday he’d been a physical education teacher at Ipswich Grammar.

He had been at the Brickyard before dawn—not for the telecast but for the atmosphere. “I wanted to hear the gun sound when the gates opened at 6 a.m, see the traffic stretching for a mile, listen to the music coming from the car radios.”

It was a crisp May morning and, as for most things that had happened in his life, Diffey was counting his earned blessings. He had also been appointed to call the track and field at the 2020 summer Tokyo Olympics (postponed because of the global health pandemic). There are few bigger gigs in live sport.

In motorsport, the NASCAR–IndyCar balance was being redressed. NBC had increased its audience by 11 per cent in that first year. NASCAR’s Daytona 500 had dropped from 12 million to 9 million in two years. Diffey had hosted a NASCAR chat show for NBC and called two events as a standby, but ‘they’d never let a foreign voice do it full-time’. Australian Supercar fans knew Diffey as ‘Stiffy’, a sobriquet given him by twice world motorcycle champion Barry Sheene, who’d moved to Australia because the metal in his shattered legs couldn’t stand a Northern Hemisphere winter. Greg Rust, calling alongside Diffey, was ‘Thruster’.  Sheene, a first-class larrikin and amazingly well connected, encouraged Diffey to take his talent offshore.

Diffey had come up the classic way—his grandfather Clifton Dorset Diffey raced a Rudge Ulster with some success. His father, disappointed he was never allowed to do what Clifton had done, helped his boys Colin and Leigh when they went flat-track racing. Leigh picked up a microphone at Queensland’s Tivoli motocross circuit (‘we can pay you $60’) and progressed to Supercross Masters under the tutelage of promoter, Phil Christensen, coincidentally an IndyCar tragic. Diffey bet his whole teaching career on crossing the border into New South Wales, ended up at Network Ten’s Sports Tonight learning to be a reporter (“I’d never touched a typewriter”) and went on air when Sports Director David White invested the station’s flagging fortunes in V8 Supercar racing.

In 1999 Diffey was at the Le Mans 24 Hour race, co-hosting a documentary for Australian TV, his first offshore assignment. It was called ‘as live’; as the cars came over the display ramp, he had one chance to nail the all-important intro. And he did it, his timing perfect. “What are you doing in Australia when you could be doing it for the world?” the production crew needled him. Many others encouraged him, too, including British motorsport impresario Andrew Marriott; and his good friend ‘Five Toes’, motorcycle racer Daryl Beattie, second in the world championship, who lost the toes on one foot to a hungry drive chain.

Diffey left Australia the next year—Network Ten was none too pleased—and worked for the BBC, on bikes and cars (“I called the CART race at the Lausitzring when Alex Zanardi lost his legs”), migrated to Speed Channel in the States and joined NBC in 2012. Most commentators are specialists in one branch of motorsport. Diffey does the lot. He has the widest repertoire of anyone in the business. He once called the Italian Grand Prix from NBC Sports’ massive studio complex in Stamford, Connecticut, then drove to Watkins Glen to commentate the IndyCar GP later the same day.

He seems not to do his homework and yet he does. In his commentary position there’s a one-pager on each of the teams. He calls it his ‘wall of words’. He’s renowned for his pre-dawn phone calls to his producers with helpful ideas. His co-commentators are friends: “You must get on off-air to get on on-air” is his motto. At the Indy 500 he called with former racers Paul Tracy, “who should have won in 2002 with Team Green”, and Townsend Bell, who is still current in IMSA sports cars. “They can speculate; it’s not my job to tell an audience what an athlete is going through. My job is to build up the drama,” Leigh said. But never to overhype it. “If a race is poor, you can’t whip it into a frenzy. People know what they’re seeing.” The Diffey style is casual and relaxed; if he’s clearly having a good time, the audience will too.

Tomorrow we look at our final excerpt – chapter 20, The Winner is….Power. This takes on a ride with Australia’s first winner of the Indy 500, Will Power who achieved the feat in 2018. Some 117 years after Rupert Jeffkins attempted the feat in the very first race in 1911.