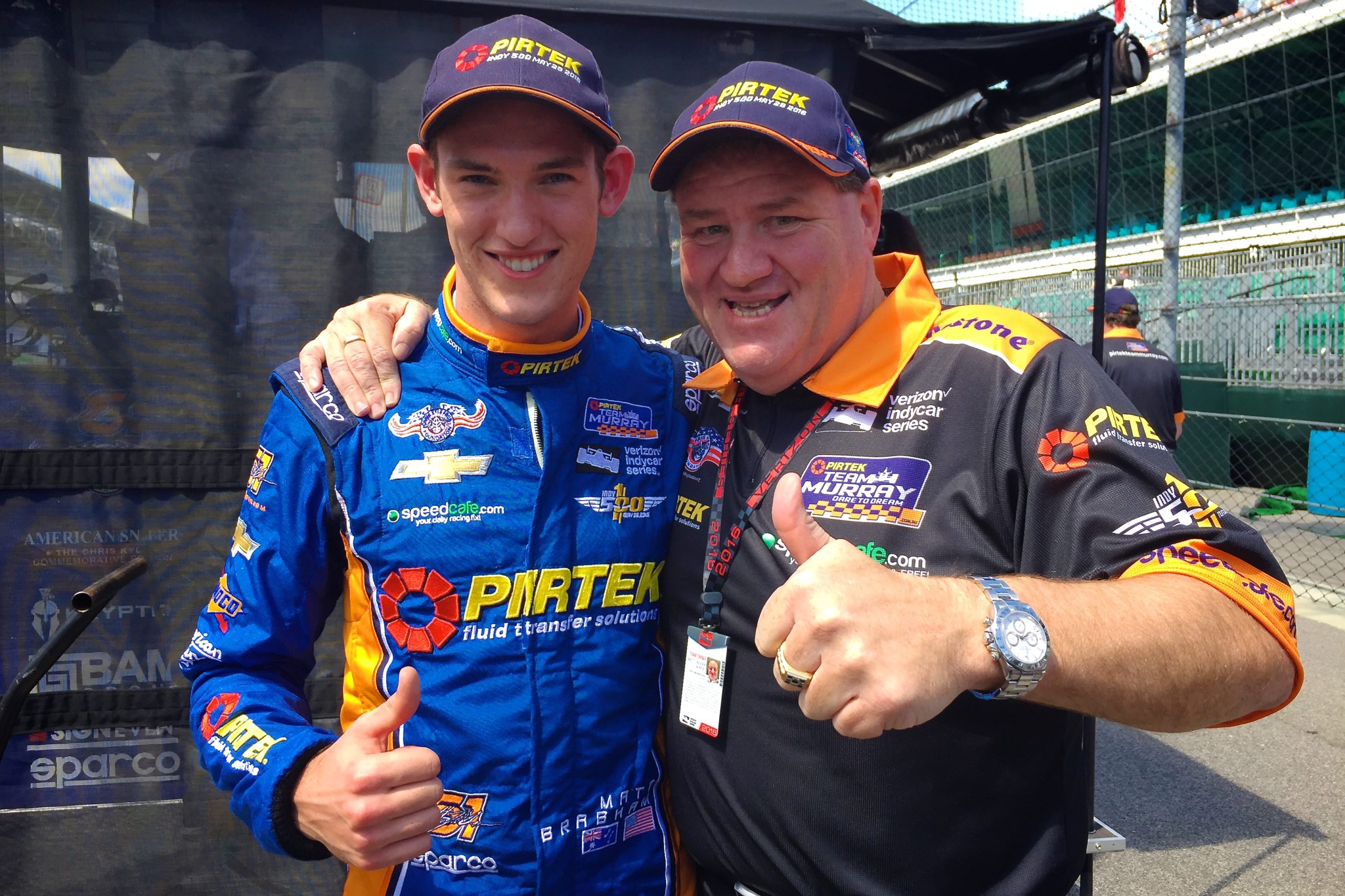 Chapter – 16 Matty Brabs and the Crusher

Today we look at chapter 16 and Matty Brabs and the Crusher. The story about Pirtek Team Murray and its ambitious one-off shot at the 100th Indianapolis 500 in 2016. Brett ‘Crusher’ Murray is also the owner of Speedcafe.com.

In 2016 Matthew Brabham became the third generation of his family to race in the Indianapolis 500 and he did it only because of the intense ambition of an unrelenting larrikin, Australian journalist turned PR operator Brett Murray. Murray, not known for his subtlety, turned out to have a soul. Who would have thought it? He was known on two continents as ‘Crusher’. There wouldn’t be many of his acquaintances along pit road who could tell you his real name.

For the Month of May the pair become the Odd Couple of Gasoline Alley:  the  quietly  spoken  22-year-old  grandson  of Jack Brabham, son of Geoffrey, accompanied by his glamour girlfriend, and the gruff beer keg of a bloke with a vocabulary of expletives and the visage of a survivor of seasons of playing American football in Australia, where he picked up his nickname.

Crusher and Matty Brabs came home 22nd in the Indy 500. And Crusher, with not even a hint of modesty, was able to say: ‘In another 100 years’ time they will go to the record books and there will be the names Brabham and Murray on the same line.’

Matty Brabs had been trying to crack the big time for four years. No one doubted he had the talent and his dad had the contacts. They had pedigree, and don’t let anyone tell you that doesn’t count for something, but they didn’t have money or salesmanship.

“The circumstances have been very frustrating,” Matty told me in his parents’ lakeside condo in Clearwater Cove, just north of Indianapolis. (That’s another thing he had going for him— rent-free accommodation. His parents bought the place when he first set out to make a go of the American racing scene.)

“If  you  want  to find  the  money,  you  have  to  try  to  be  a personality,” Matty said. “That’s just not us. My dad is very quiet— reserved. The Andrettis, comparatively, are super smart—they generate money.” He allowed a moment for introspection. “Our personalities don’t even fit into motor racing as well as Jack’s did when he was racing.”

Matt’s  climb  up  the  totem  pole  of  success  started  out modestly: karting success in Australia, then Formula Ford wins in national and state titles. But then it skyrocketed. He moved to the United States in 2012 at just eighteen and in the space of two years he claimed the US F2000 National Championship and the Pro Mazda Championship series, both essential steps on the staircase to Indy Lights and from there to IndyCar.

The trajectory was set. At twenty, all it would take to go all the way would be a bit of luck, and a budget.

Michael Andretti’s team, set up to give youngsters a boost, had been very good for Matt in the junior categories. They could see his true potential and they’d continued their support for a time, even after the funding ran out. There was respect. The Brabhams and the Andrettis go back generations.

Geoff and Roseina, too, had been with their boy all the way. The proud parents had his back at race meetings and also in those awkward moments of negotiation when you want to reach out and shake the prospective sponsor because you know you can do the business if only they’d hand over the cash.

Of late, their day-to-day role as the Matty support module has been taken over by Kimberly Bogle, Matt’s girlfriend of six years. They’d met at a race meeting when Kim was a spokes- model for one of Matt’s sponsors. She ‘got’ motor racing. Her first job, while still in college—on a Donald Trump Miss Universe Contest scholarship—had been umbrella girl for MotoGP. She was world champion Nicky Hayden’s last umbrella girl at Indianapolis. Kim holds a Bachelor of International Business. The pair complement each other. They formed part of a new breed of Indianapolis’ motor-racing fraternity. The Brabham condo had become a perfect place for Sunday afternoon lake parties with Indy’s young, fast crowd. Kim was helping Matt come out of his shell. “It was funny at the beginning,” she said. “He was under 21 and we had trouble getting him into bars.” Even now he looks like he might not qualify.

Crusher could clear the same bar. The just-turned 50-year-old could pass for a serving member of any law enforcement agency, but he plays on being the exact opposite: the cover of his recently published autobiography entitled You Can’t Make That S#^! Up carries a mug shot of him taken while incarcerated overnight in an Indianapolis prison for blowing positive while riding a jet ski. His life story reads like a Robert G. Barrett Les Norton novel—an irreverent, irascible Aussie knockabout. Crusher started out as a journo with credits such as covering a rugby league Kangaroo tour—a precarious gig in itself— followed by time spent as a footy player in his own right with one US tour cap, a nightclub bouncer in places of the nefarious kind, a voracious punter and schoolboy SP bookie.

“I’d promised Jack Brabham a few years back that I’d keep an eye on young Matty and help him where I could,” Crusher told me. The words came so easily, but they masked something a lot deeper: the respect that he held for Jack’s achievements and the connection he’d developed with the sport.

Tomorrow we look at chapter 18 Aussies Heroes. Which considers many of the off-track Aussies and Kiwis at Indy, led by commentator Leigh Diffey who proudly became the first non-American to call play-by-play of the Indy 500 in 2019.