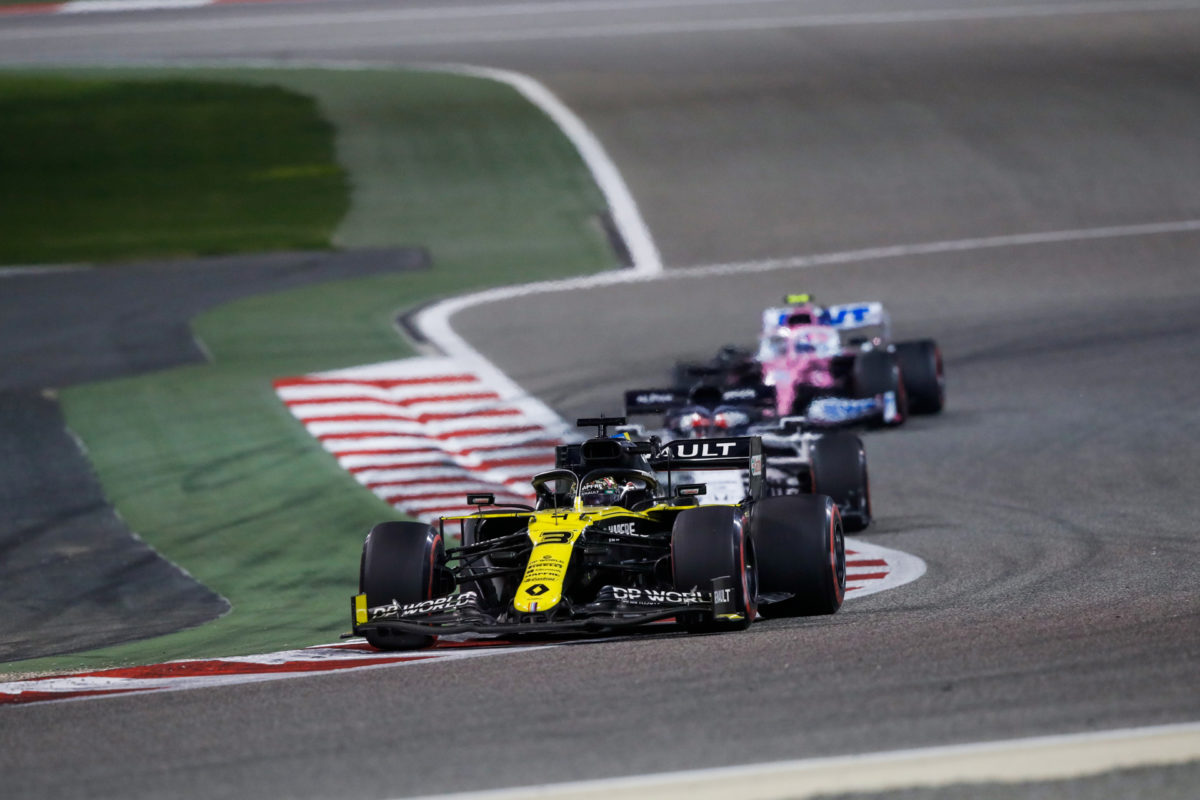 Daniel Ricciardo admitted he was “pretty sad” with fifth in the Sakhir Grand Prix, which saw Sergio Perez recover from a first-lap pit stop to win.

Racing Point’s Perez was spun by Ferrari’s Charles Leclerc on the opening lap, which also forced Red Bull’s Max Verstappen out of the race.

Perez dropped to last and was forced into the pit lane, but fought to the podium positions by a Lap 61 Safety Car. That became the lead when a bungled Mercedes pit stop saw George Russell and Valtteri Bottas drop to the midpack.

Perez clung on to claim a maiden Formula 1 win ahead of Renault’s Esteban Ocon and Racing Point team-mate Lance Stroll.

Ricciardo finished fifth behind McLaren’s Carlos Sainz, with the pair losing track position to the Racing Points after they pitted under a Lap 55 Virtual Safety Car that was briefer that either of their teams had anticipated.

While delighted for Ocon, who clinched his first podium, Ricciardo was mystified how he and his rivals allowed Perez to sail to victory.

“It’s a pretty sad fifth I’d say,” said Ricciardo, who dropped to fifth in the standings, 13 points down on Perez.

“I wasn’t particularly pleased with how the race panned out in terms of strategy, and there were a few calls where I thought we just missed the ball, we were just kind of a step behind.

“So to somehow get fifth… we’ll take it, but obviously it’s mixed because Esteban is second. Second and fifth is huge for the team, but then you see Racing Point one and three, it’s tough.

“It’s Esteban’s first podium in F1… obviously (the team) are happy for him but for the constructors’ it was a tough day.

Ricciardo, who claimed his 10th straight points finish, and his seventh top-five of the season, was disappointed to cede ground to Racing Point with one race remaining.

“As soon as the start happened, obviously we were P4 on Lap 1,” said Ricciardo, who had vaulted from seventh on the grid.

“Max was out, obviously a contender for the podium, and I felt like there was a lot of opportunity today.

“But we got undercut in the pit stop, so that whole second stint, we spent behind (AlphaTauri’s Daniil) Kvyat, and I felt for the track position we had, we could have done more.”

The season will conclude at this weekend’s Abu Dhabi Grand Prix, with Free Practice 1 to commence Friday at 2000 AEDT.