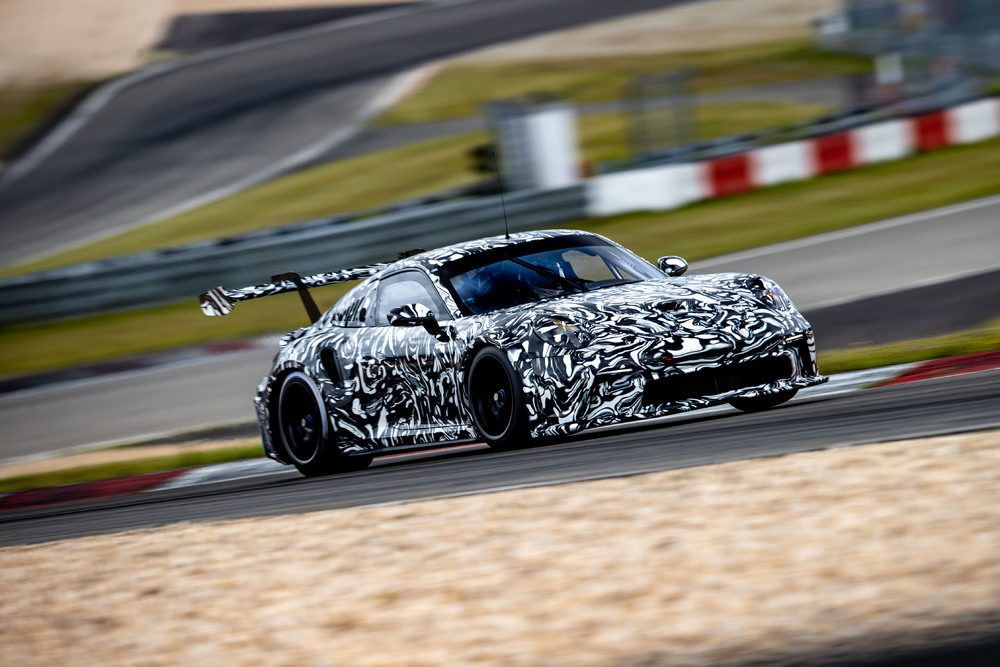 Porsche has revealed a camouflaged prototype of the 911 GT3 Cup car which will be campaigned in the Porsche Payce Carrera Cup Australia from 2022.

The first race car based on the current 911 generation 992, the 911 GT3 Cup car recently ran at the Motorsport Arena Oschersleben in Germany for a final shakedown.

While Australia will have to wait until 2022 for the new car, it will debut in next year’s Porsche Mobil 1 Supercup season.

Porsche began developing the new model in 2018, with the Test Car 01 (TC01) put on its wheels. In mid-2019, one prototype was sent to the in-house wind tunnel, while a second was sent out onto the test track at the Weissach R&D Centre, where it did 30 flying laps with Klaus Bachler at the wheel.

After four more days of testing at Weissach, the TC01 was tested at the likes of the Lausitzring and Monza, with Porsche wanting to run the car at a broad range of circuits.

The car, once identical to the production racer, was ready for its final shakedown, which took place at Oschersleben.

Porsche simulated a race weekend with the new car, giving it an opportunity to run from a customers’ perspective.

Featured on the car was a psychedelic camouflage pattern which mirrored the outline of famous racetracks.

“It proved very beneficial to exchange ideas in close cooperation with the racing teams and our international one-make cup organisations… around the world and also outside our own series,” Werner explained.

“We listened carefully to the engineers and mechanics as well as the drivers and team bosses to find out what they like about the current car and what is needed.

“By doing this, we got a very accurate picture of the mood and we gathered a great deal of information so that we could set the right priorities for the new, globally-run model.

“In fact, this also applies to the eventual running of the vehicle in, for example, endurance races or club sport events.”

Technical Manager Martijn Meijs added that the impressions of several drivers also contributed to the development of the car, which will be the seventh cup-car generation.

“For us, it was important to learn as much as possible on the broadest possible range of circuits with different characteristics,” Meijs said.

“These experiences were then incorporated into the final stage of development.

“In choosing the drivers, we also wanted a wide range of personalities. They all gave us specific feedback. As engineers, we experience the car through what they say.

“In terms of performance, the new 911 GT3 Cup has taken a giant leap forward… the lap times also underline this,” Bergmeister added.

“It has once again been improved in all areas… from the engine and suspension to the aerodynamics and brakes right through to the electronics and ergonomics.”

Technical specifications and further information of the new 911 GT3 Cup car will be announced on 12 December.

The Australian Carrera Cup series recently revealed an eight-round 2021 calendar, which includes an event in New Zealand in support of Supercars.