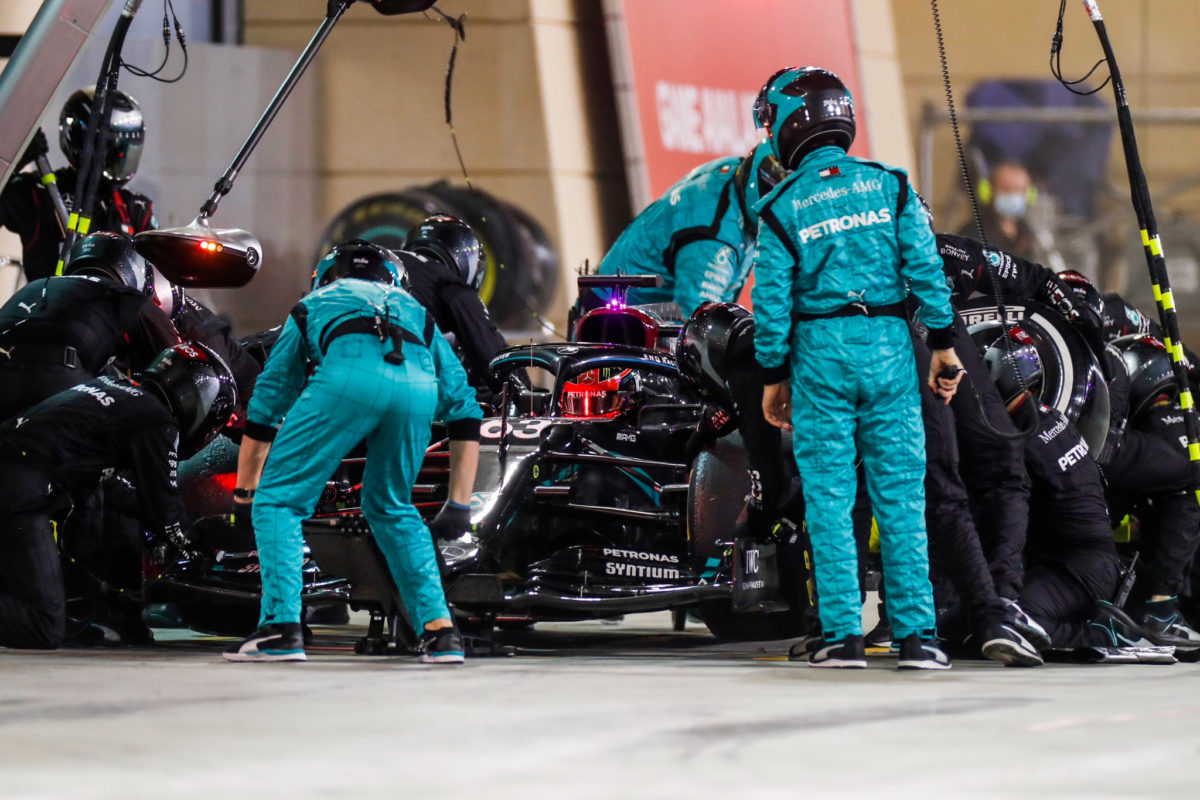 Mercedes Team Principal Toto Wolff has lamented a radio transmission failure for a “colossal f**k up” at the Sakhir Grand Prix, which saw the team fined over a pit stop nightmare.

George Russell led his first Formula 1 start for Mercedes with team-mate Valtteri Bottas five seconds behind before a Safety Car was deployed on Lap 59 for debris left behind by Williams’ Jack Aitken.

Although both drivers were comfortable on their used tyres, Mercedes opted to pit both cars as a precaution.

Russell led Bottas in a double-stack stop, with both drivers set to take on medium tyres. However, not all tyres were delivered in the lane, leading to a mix-up for Russell which dropped Bottas into the midfield following a 27-second stop.

The team noticed the error during Bottas’ stop and avoided mixing the sets, and refit the Finn’s hard tyres.

Mercedes addressed the issue and pitted Russell a lap later. The Briton recovered to second behind eventual winner Sergio Perez after the restart before a late puncture ruined his hopes, leaving him ninth and one place behind Bottas.

Wolff said a radio transmission failure led to Russell’s side of the garage not getting the call to ready the tyres, while Bottas’ did.

“I know I’m not allowed to say that but it was.

“Simply one of the tyre crews didn’t hear the call, we had a radio failure in the garage and when the car came in they didn’t know we had the wrong tyres and this is why we exited with the wrong tyres.”

The team was later fined €20,000 (AUD$32,000) for the error and escaped a sporting penalty up to disqualification for Russell, considering both drivers’ results were compromised.

“Car 63 was fitted with front tyres that were allocated to Car 77,” the stewards’ report read.

“This was caused by a radio communications technical issue wherein the pit wall’s communication to the pit crew that Car 63 was entering the pits prior to (and not after) Car 77, failed to be received by the crew of Car 63 because at the same time, the driver of Car 63 transmitted over the top of that message.

“This resulted in the front tyres of Car 77 accidentally going onto Car 63. (The cars were “double stacked” at the time.) This is clearly a breach of the regulations and would normally involve a sporting penalty up to Disqualification.

“However, in this case there are mitigating circumstances, additional to the radio issue referred to above.

“Firstly, the team rectified the problem within 1 lap. This involved Car 63 making another pit stop, thus dropping it further down the classification.

“Secondly, Car 77 made a pit stop to change tyres only to find that the front tyres to be fitted to it, were on Car 63, so was sent out after considerable delay, with the tyres that were on Car 77 prior to the pit stop. This also impacted the final classification of Car 77.

“Thirdly, although this type of infringement is not catered for under the “3 lap tolerance” referred to in the second paragraph of Article 24.4 b) (which currently only refers to the use of tyres of differing specifications), we consider it to be similar in nature.

“However, the responsibility to fit tyres in compliance with the regulations, still rests with any team and thus a penalty is considered as being required.

“It is recommended that the FIA consider amending Article 24.4 b) to accommodate this type of breach when it is rectified without delay.

“It is noted that this type of breach has not previously been experienced in Formula 1.”

Wolff said there was no single human error in play, and said his team did a good job in recovering the situation.

“We knew immediately when Valtteri didn’t have his tires, we knew that Valtteri’s tyres were on George’s car,” Wolff said.

“So, we fitted Valtteri’s old hard tyre that we’d just took off to the car again and we knew we need to pit George again.

“I think overall we did a good job, technical failures happen, that wasn’t any human error.

“We need to find out, we’ve checked it now. We’ve seen it’s not functioning. We don’t know why.

“These things happen and we need to learn from it.”