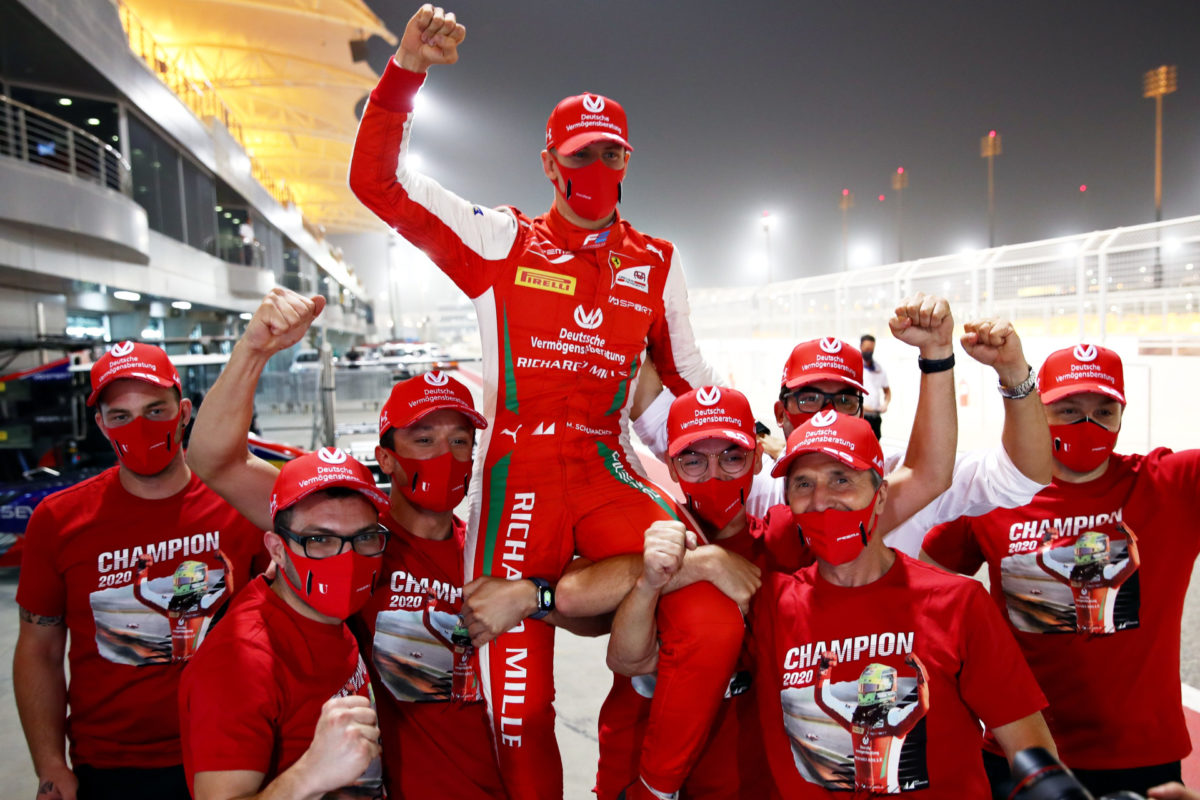 Mick Schumacher celebrates with his team

Mick Schumacher celebrated his promotion to Formula 1 with the 2020 Formula 2 title as Carlin’s Jehan Daruvala claimed victory in the season-ending Sakhir sprint race.

Daruvala emerged with the win after a race-long battle with Dan Ticktum, before feature race winner Yuki Tsunoda made it a Carlin one-two.

Schumacher’s title hopes were slipping away after an early lock-up forced the German into an early pit stop, dropping him to 18th.

The Prema driver attempted to pass Ticktum and Daruvala for the lead early, but Schumacher nearly threw it all away at Turn 4 with his error, narrowly avoiding Ticktum.

UNI-Virtuosi’s Callum Ilott was the only driver who could prevent Schumacher from winning the title, and retained fourth off the line.

Ticktum’s lead was whittled away following a Virtual Safety Car to clear up debris, with Daruvala closing back up.

Ilott cleared Schumacher into third, with Guanyu Zhou and Robert Shwartzman following through. Struggling with flat-spotted tyres, Schumacher pitted and emerged in 20th.

With the title in the balance, Ilott failed to keep touch with Ticktum and Daruvala and battled to keep Shwartzman behind.

Ilott’s tyres began to wear, and the Briton fell behind Tsunoda, Zhou and Shwarztman.

After snatching the lead from Ticktum, Daruvala opened up a gap and claimed his maiden win with a 3.5s advantage.

Ticktum lost second to Tsunoda down the final straight, with Zhou fourth ahead of Shwartzman, Guiliano Alesi, Luca Ghiotto and Felipe Drugovich.

Schumacher, who scored just two victories in F2 this year – one in Russia and one at Monza – was delighted to win the F2 title on his second attempt.

“To be honest, I’m a bit overwhelmed, I don’t yet feel like a champion,” Schumacher said after the race.

“It will take a few days I think.

“The guys who I have been driving against this year are absolutely amazing and are on a high level of driving and have been very respectful.

“Callum gave me a run for my money, it’s been a really tough year. So a big thank you to him as well.”

Tsunoda finished just one point behind Ilott in third, ahead of Shwarztman and Nikita Mazepin, who will join Schumacher at Haas in 2021.

The 2021 F2 grid will assemble for post-season testing at the Bahrain circuit on Tuesday.