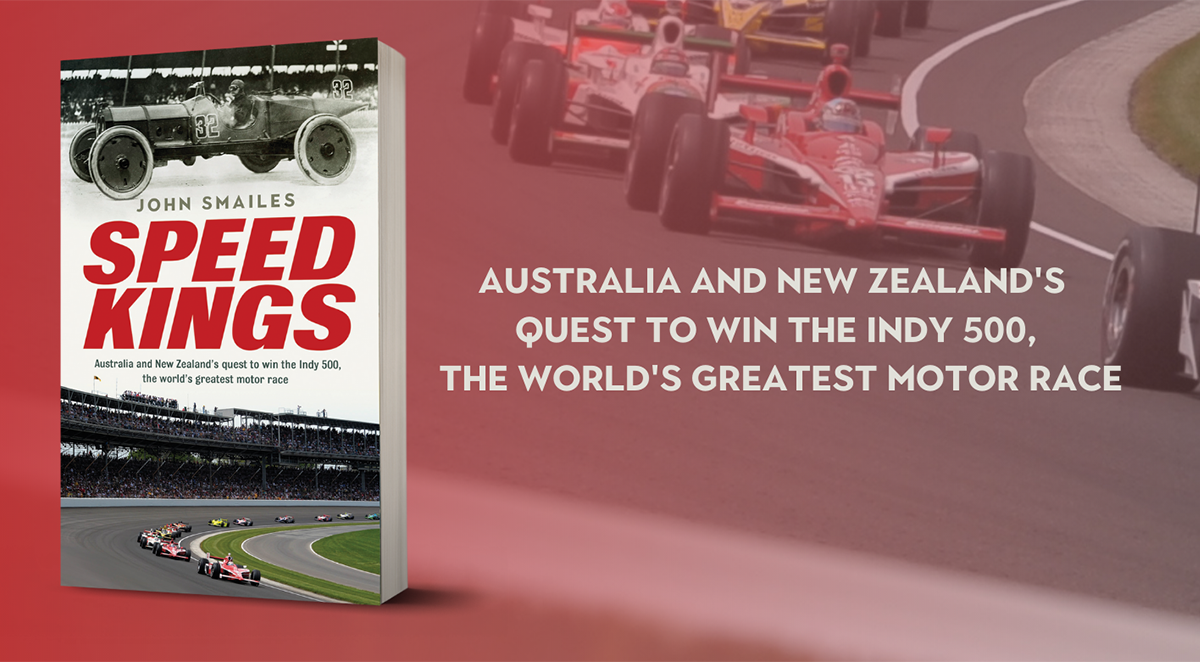 There are few Australian sports fans who would have any idea who Rupert Jeffkins was, or what he achieved as one of the true original pioneers of international motorsport.

Author John Smailes first heard about him from his grandfather Charlie, who owned Woolgar’s Garage in the basement of a bond store on Sydney’s Circular Quay near the Royal Automobile Club.

Charlie would talk to young Smailes about all the racing greats like A.V. Turner, Hope Barltett, and Phil Garlick, and every now and again Jeffkins would get a mention, although he was a mystery to him.

Through the years several journalists and enthusiasts retraced some of his achievements – hell, he even has his own Facebook page, Friends of Rupert Jeffkins – but buttoning down the real story of this entrepreneurial, self-promoting, polygamist larrikin was going to be virtually impossible.

Jeffkins was always going to be a focus on any book about Australian and Kiwi drivers linked to Indianapolis; he is worth a book on his own.

If only the simple headstone which has rested in the Liverpool General Cemetery in Sydney could be unbolted and the spirit of Jeffkins could tell the real story.

The chances are if the ghost had the same larrikin streak and ability to embellish the truth as the original Jeffkins, none of us would probably be any the wiser.

Apart from a few of his grandfather’s tales, Smailes had no idea who Jeffkins was either until he set out on a journey to cover the relationship Australians and Kiwis have had with the Indianapolis Motor Speedway and in particular the ‘Greatest Spectacle in Racing’, the Indianapolis 500.

Smailes discovered that Jeffkins was Australia’s original Speed King – which turned into the title of his latest book, Speed Kings – Australian and New Zealand’s quest to win the Indy 500, the world’s greatest motor race.

Ironically, Smailes uses a first person piece from the ghost of Jeffkins to tell his story, which is an interesting entree to what is a detailed and informative read.

Smailes has captured the passion of what the Speedway and the 500 are about, and not only details the on and off track involvement of the Australians and Kiwis, but also educates the reader on the history of the facility itself and its evolution over the last 115-odd years.

There have been 17 Aussie and Kiwi drivers contest the Indy 500, but just two have managed to have their face placed on to the famous Borg-Warner trophy; Scott Dixon (2008) and Will Power (2018).

While not all of them have managed to ‘drink the milk’, all 17 drivers have their individual stories told in some fascinating detail.

Some just had one start and others did not make the show at all, but all of them had a fascinating tale of their own ‘road to Indy’.

Smailes has travelled far and wide to research his book and conducted more than 54 interview sessions, several of which included more than one person.

Likewise, there were more than 50 books and publications used as reference points.

There have also been more than another 80 mechanics, engineer, designers, managers, strategists, team owners, promoters and star-struck dreamers who have also managed to be a part of the ‘greatest spectacle in racing’, dating back to 1911.

People like mechanic-turned-owner Barry Green from Western Australia, who won the Indy 500 with Jacques Villeneuve in 1995 in his first full season as team owner.

At the other end of the scale, Kiwi Paul ‘Ziggy’ Harcus had to wait 30 years for his first Indy 500 ring when he was on the radio for Japanese driver Takumo Sato when he won for Andretti Autosport in 2017.

Funnily enough, in a chapter titled Engine Room, many of these great characters from the paddock are brought to life, including Aussie John ‘Ando’ Anderson, who was one of Harcus’ original workmates in the business.

“I had spiky hair back then,” said Harcus.

“He took one look at me and said ‘you’re Ziggy Stardust’.

While the name has stuck for more than 30 years and while ‘Ando’ and ‘Ziggy’ were long-time mates of mine and actually teammates when I worked at PacWest Racing in 2000, I never knew the origins of the ‘Ziggy’ nickname until reading this book; I had just never asked.

It was just one of many interesting facts that helped join a few dots.

‘Ando’ got his first Indy 500 win after 20 years in 2005 when he called strategy for Dan Wheldon and got another with Dario Franchitti two years later.

I jumped off an international flight in Brisbane in December of 2010 to discover a list of text and voice messages telling me that ‘Ando’ had died of a heart attack after one of his regular racquetball games.

One of my favourite chapters of the book is Aussies Heroes, which leads on the unsung achievements of Leigh Diffey who became the first non-American to call a play-by-play of the Indy 500 in 2019.

That chapter also examines several other Australians who have raced at the Indianapolis Speedway, but not in the month of May.

Marcos Ambrose raced NASCAR at the Brickyard, Mark Webber thumped around the road course in an F1 car, and Casey Stoner did the same on a MotoGP bike. Even flying ace Matt Hall contested a Red Bull air race at the venue.

It is a little difficult to review a book which includes yourself as one of the topics, but that is the case with this publication, because I ran my own Pirtek Team Murray entry in the 100th Indy 500 in 2016, which was driven by third-generation racer Matt Brabham.

While I have my own coffee-table style book being prepared at the moment to celebrate the fifth anniversary of that event, Smailes has managed to capture our commitment and programme in one of the book’s 21 chapters, although there are a couple of facts that we mixed up in his notepad.

At the end of the day it is actually an honour to be included in a book which tells the story of many of my good friends and motor racing heroes, both on and off the track.

It is not until I started making my way through the book that I recognised that I have worked with so many legends and wonderful characters of the business. It also provided me with more of an insight to each one of them, stuff you just take for granted.

I am sure there will be plenty of people associated with the business who will enjoy the walk down a long memory lane where I am sure they will learn a few things that tie a few other things together.

For others, the book will provide some insight into what the Indianapolis Motor Speedway and the Indy 500 mean to so many, and why.

* This week Speedcafe.com will be running daily excerpts from Speed Kings in an effort to provide more insight to the historical and current links to the Indianapolis Motor Speedway and the Indy 500.

We will also be giving readers the chance to win one of three books each day, with the winners being announced through our Facebook page. To enter all you have to do is click this link and enter your details.

Tomorrow’s first excerpt looks at the final laps of Australian Rupert Jeffkin in the second Indianapolis 500 in 1912, a race which almost gave Australia its first winner. Ironically it was some 106 years later that Will Power would eventually achieve that feat.