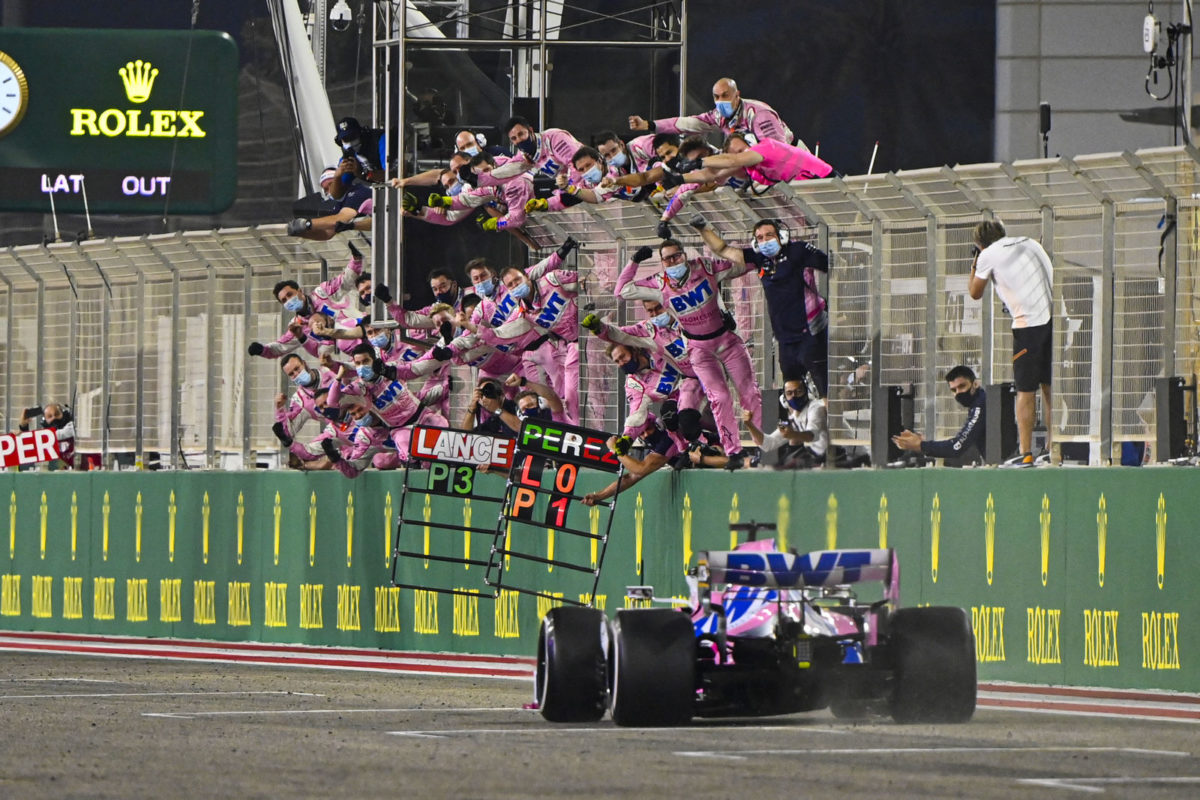 Sergio Perez has sealed victory in the Formula 1 Sakhir Grand Prix in an extraordinary encounter that saw him 18th and last at the end of the opening lap.

The Racing Point driver was involved in a three-way clash at Turn 4 on Lap 1 before working his way through the field over the following 86 lap encounter.

His cause was aided by two Safety Car periods and a bizarre pitstop error at Mercedes that saw the wrong set of tyres fitted to George Russell’s car, and Valtteri Bottas stopping but not taking on new tyres in the confusion.

Perez then survived a late challenge from Russell, whose hopes ended with a puncture, to claim a maiden world championship grand prix win.

A good start for Russell saw him lead from Bottas from the start while Kimi Raikkonen spun in the pack as he exited Turn 3.

The Red Bull and Ferrari drivers were instant retirements with damage to the front of both cars while Perez fell to 18th and took to the pits.

A frustrated Verstappen kicked the tyre wall as he walked away from the wreckage, his hopes of finishing second in the championship taking a serious hit as a result of the retirement.

The incident was triggered by a poor exit from Bottas out of Turn 2, allowing Perez, Verstappen, and Leclerc a run on the Mercedes driver.

Verstappen had braked early for Turn 4, while Leclerc up the inside locked a brake and tipped the Force India into a spin.

Taking avoiding action, Verstappen had managed to avoid the chaos but couldn’t slow or turn sufficiently to avoid clouting the barrier.

It left Russell leading from Bottas, Carlos Sainz, and Daniel Ricciardo in the top four as a result of the opening lap melee.

The Safety Car was withdrawn at the end of Lap 6 with Russell backing up the pack before sprinting clear midway down the back straight.

The Brit jumped clear from Bottas who came under attack from Sainz, the McLaren driver gaining the upper hand at Turn 1, only to run wide at Turn 2 and hand the position back.

At the end of the first racing lap, Russell held a 1.1 second advantage over his team-mate, and continued to eke that advantage out at the tune of 0.4s a lap.

After 21 laps, Perez had climbed back into the championship points after taking advantage of a wrong footed Norris, who’d just been passed by Albon at Turn 4.

The Mexican then moved by the Red Bull driver a lap later, driving around the outside of his Thai rival to move up to ninth.

Pitstops began from lap 27 for a number of the backmarkers, with the midfield runners taking to the lane from a lap later.

Mercedes had stamped its authority at the front of the race, Russell leading by just under two seconds from Bottas with Sainz more than 10 seconds away as he stopped at the end of Lap 28.

Ricciardo pitted next time around, the Australian rejoining and losing a spot to Daniil Kvyat who’d stopped two laps earlier.

Though Stroll had emerged ahead, Ocon was able to round the Canadian at Turn 4, taking the outside line to claim ninth place on the road.

Mercedes hauled Russell in from the race lead after 45 laps, swapping his medium tyres for a new set of hards.

Shortly after his stop, Russell complained of a lack of power before being instructed to clear a sensor in the Mercedes’ power unit.

Bottas was in at the end of Lap 49. Having trailed his substitute team-mate by three seconds prior to Russell’s stop, he rejoined almost eight seconds adrift.

Once the pit stops sequence had shaken out, Sainz was third some 15 seconds in arrears of the two Mercedes.

A Virtual Safety Car was called when Nicholas Latifi’s Williams ground to a halt at Turn 8.

The Canadian had pulled off to driver’s right, near an opening in the fence, allowing the car to be easily recovered.

A host of drivers took to the lane under the resulting Virtual Safety Car, including Sainz, who dived into the lane as the green flag waved once more.

It dropped the Spaniard to seventh, and Ricciardo to eighth after he too stopped for a second time.

Meanwhile, Perez took full advantage as he scythed by Stroll and Ocon to take fourth on Lap 56 and third on Lap 57.

A string of fastest laps for Bottas saw the gap between he and the race leader reduce, the Finn 4.6 seconds away from the lead on Lap 62.

On the same lap, Jack Aitken lost his front wing to trigger another Virtual Safety Car.

The Williams driver had run wide on the exit of Turn 10, spinning and tagging the barrier with the nose of the car to rip the front wing off.

Initially a Virtual Safety Car, that became a full Safety Car soon after, Mercedes boxing both its cars.

It was a defining moment in the race as the team fit the wrong tyres to Russell’s car, only realising its error while bolting on new rubber to Bottas’ car.

As a result, the Finn had his original tyres refitted before being sent on his way while Russell was called back into the pits to have the error corrected.

That left Perez out front ahead of Ocon and Stroll with Bottas and Russell.

“This should be a big tyre advantage,” came the encouragement to Russell from his race engineer.

Race Control withdrew the Safety Car at the end of Lap 68.

Stroll nearly clouted the back of Ocon as the field was about to restart, locking the brakes on his Racing Point as he attempted to avoid the back of the Renault.

Once the race was green again, Russell didn’t pounce on his team-mate at Turn 4 despite appearing to have an opportunity to take the inside line.

A mistake from Bottas out of Turn 4 a lap later allowed Russell to make the move, seizing fourth place at Turn 7 to climb up one spot.

He quickly cruised up to the back of Stroll, passing the Canadian at Turn 1 as they started Lap 72 to regain a podium place.

Ocon was next in the Mercedes driver’s sights, moving by the Frenchman at Turn 4 on Lap 73 with ease.

By the time Russell had claimed second, Perez had extended a 3.4 second lead, while Bottas on a set of old hard tyres, remained fifth.

Steaming up on Perez, his charge ended when he picked up a rear left puncture and was forced to stop at the end of Lap 78, dropping him to 15th.

That promoted Ocon to second and Stroll to third, while Sainz had climbed back to fourth as a result of the dramas for the two Mercedes.

Russell climbed back into the points on the penultimate lap by passing Gasly, and soon moved by Norris too to take ninth.

It was a comfortable victory in the end for Perez with Ocon leading home Stroll in a one-three for Racing Point.

The order was then Sainz, Ricciardo, Albon, Kvyat, Bottas, Russell, and Norris in the top 10 at the end of a tumultuous 87 lap affair.