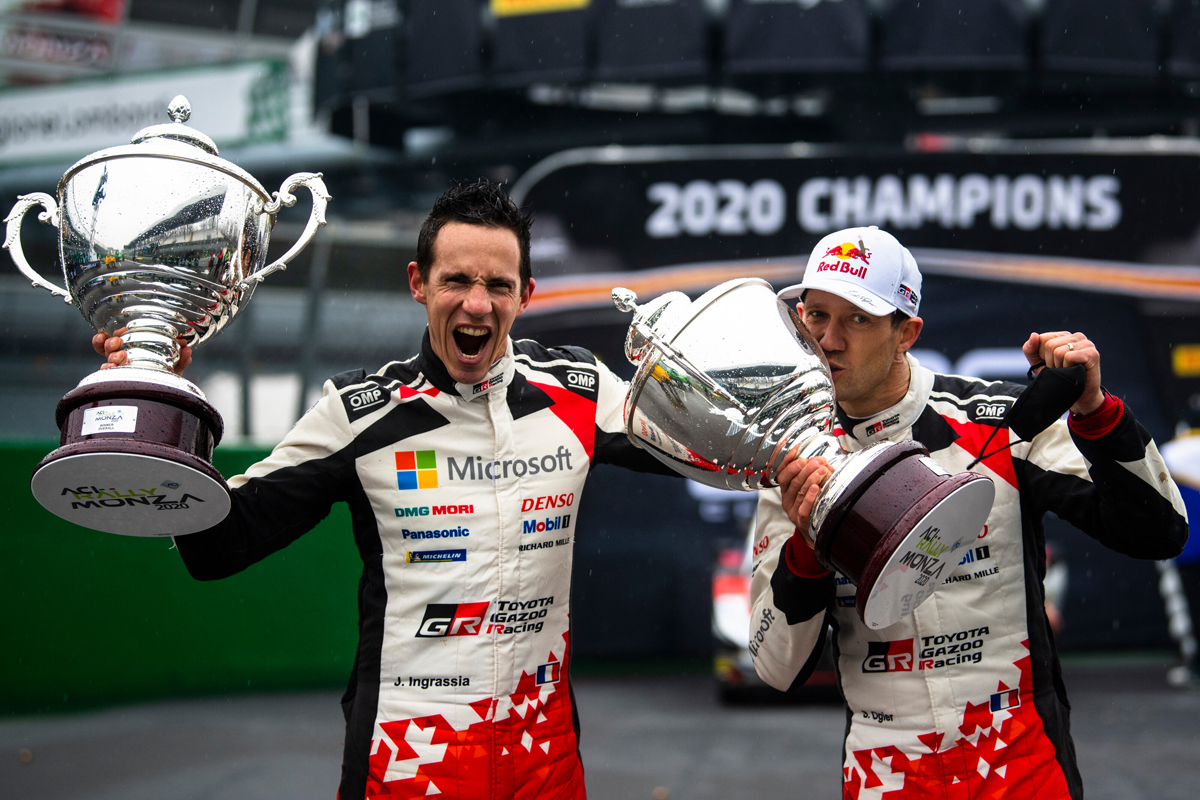 Sebastien Ogier has marked his first season with Toyota with a seventh world title following victory at the the season-ending Rally Monza.

It was a relatively tame final day in the season-ending Rally Monza following Saturday’s drama, which saw Elfyn Evans drop out of title contention.

Evans’ bid to become the third Briton to win the championship came to a crashing halt when he slid off the road in treacherous conditions in SS11.

The Welshman’s error blew the title fight wide open, with Ogier firming for a seventh crown going into the final day.

Ogier won the first stage on Sunday with his Toyota teammate Kalle Rovanpera second, with the pursuing Hyundais of Dani Sordo and Ott Tanak just behind.

Sordo won the second stage of the morning ahead of 2019 world champion Tanak, with M-Sport’s Esapekka Lappi a strong third.

However, Ogier needed only to complete the final Power Stage to claim his seventh drivers’ world title.

The bonus points went to Takamoto Katsuta, who took Power Stage honours ahead of Tanak and Evans, who returned despite his Saturday dramas.

The finale stage of 2020 was no Sunday cruise for Ogier, who battled through loose gravel and pouring rain without windscreen wipers, which failed briefly.

However, it mattered little as the Frenchman held on to take the overall win with a margin of 13.9s from Tanak.

It was Ogier’s seventh crown in eight years, and with a third different manufacturer following his titles with Volkswagen (2013-17) and Ford (2018).

“Of course we feel for Elfyn also today he has made a very strong season, very consistent, and we had really good fun to fight each other,” said Ogier, who trailed Evans by 14 points after Rally Italia Sardegna.

“I’m very happy. Not jumping in the air maybe like crazy because right now we are living in a time that, you know, a lot of people are suffering all over the world and I mean, you have to be decent.”

Tanak led home Sordo to help Hyundai seale the manufacturers’ title, with the duo split by just 1.4s at the finish. Lappi was nearly 46 second down in fourth.

Mads Ostberg won the WRC2 title in his factory-backed Citroen C3, beating Skoda’s Pontus Tidemand to the rally win and the title.

The WRC3 class title went to Hyundai’s Jari Huttunen, whose third place was enough to overhaul Marco Bulcacia Wilkinson despite the rally win ending in a Skoda one-two led by Andreas Mikkelsen.