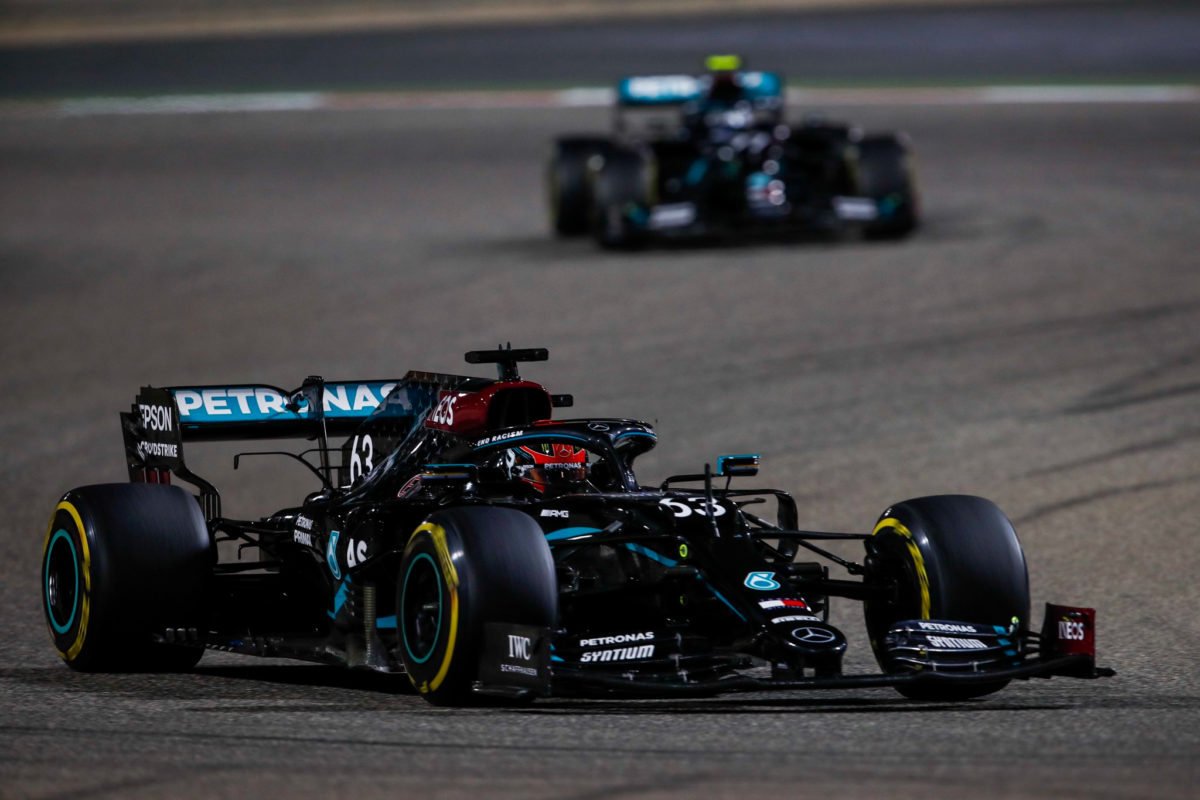 A “bloody hurt” George Russell called his parents amid the heartbreak of missing out on a maiden Formula 1 victory in Sakhir following a bungled pit stop and late puncture.

In his first appearance standing in for Lewis Hamilton, the young Briton comfortably led the opening half of the race from pole-sitter and team-mate Valtteri Bottas.

Mercedes made a late call to pit both drivers on Lap 59 after a Safety Car was deployed for debris left behind by Williams’ Jack Aitken.

Russell led Bottas into the lane in an attempted double stack stop, but Mercedes fumbled amid the late call and mixed up the tyres for both cars.

The front medium tyres allocated for Bottas were fitted to Russell’s car, while Bottas was sent back out onto his used hards following a 27-second stop.

Russell was forced to stop again to correct the error, dropping him to fifth at the restart. He climbed to second and closed on eventual winner Sergio Perez, but a late puncture dropped him out of the points altogether.

He fought back to ninth and also clinched the fastest lap of the race, but it was little consolation with the win within reach.

“If you’d told me at the start of this weekend I would have scored some points, I’d have said, ‘Right, that’s going to be a pretty fantastic weekend’,” the 22-year-old said.

“But if you’d told me I’d be leading the race, and then ended up… I don’t know.

“It really hurt. Honestly, it really bloody hurt when I got out of the car.”

Russell said he contacted his parents immediately after the race to alleviate his disappointment, but added he was proud of his efforts over the weekend.

He also believes his weekend performance will encourage team principal Toto Wolff ahead of a possible future full-time move to the Silver Arrows.

“I know (my parents) were feeling it. They said you’ve got so much to be proud of,” Russell continued.

“Same with Toto and James (Vowles, chief strategist) and Bono (Peter Bonnington, race engineer). We hugged it out.

“So hopefully I’ve given Toto some problems to sort out for the future. I’m happy. I’m proud.”

Russell was also left ruing the puncture, having recovered behind Perez before being forced to pit.

“I’ve had races where I’ve had victories taken away from me, but twice, I couldn’t believe it,” he said.

“I couldn’t believe what was happening. I drove my heart out, I had the race under control, especially in the beginning, and then obviously the Safety Car came out, which was annoying.

“But I felt comfortable. I put some good overtakes, I was fired up, I was ready to chase Sergio to get the win back, and it would have been tight, but we would have done it.

“And then it went away from us again. So that’s racing.”