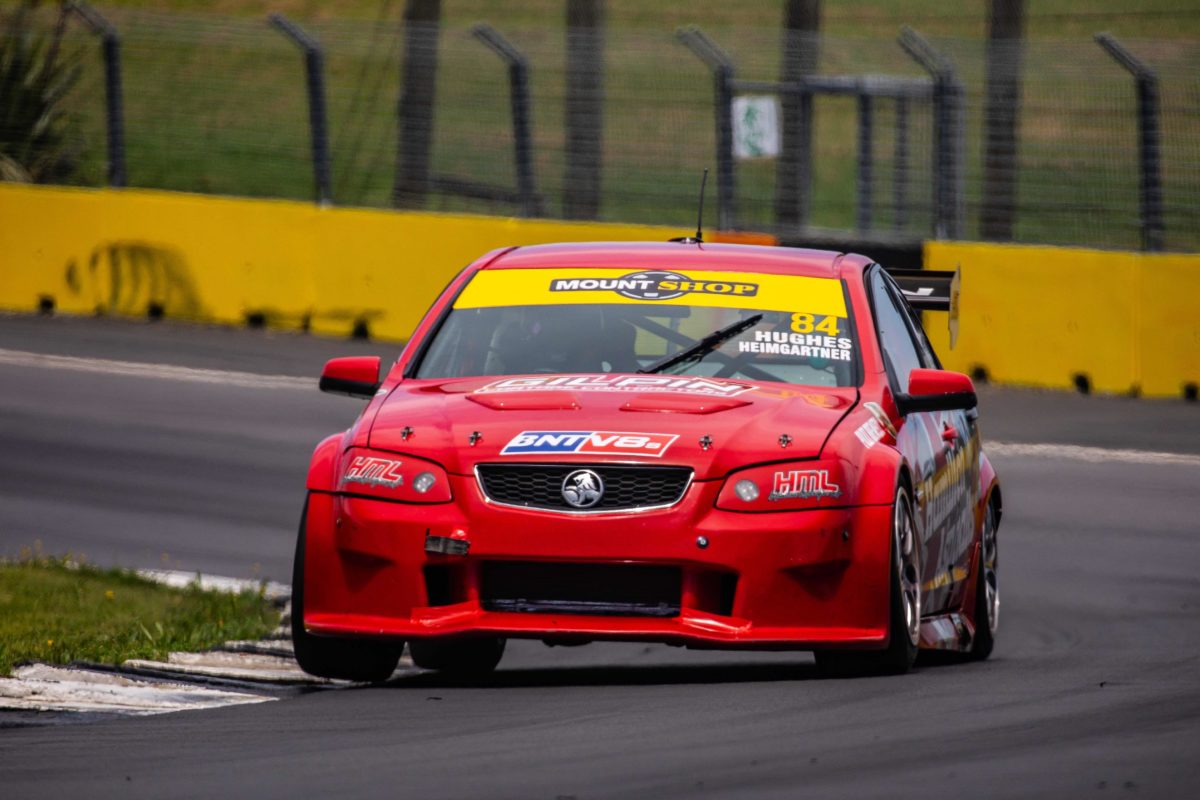 Lance Hughes and co-driver Andre Heimgartner have won the one-hour feature race this afternoon at the opening round of the BNT NZV8s Series at Pukekohe.

The pair qualified P3 for the feature racing, with the duo based on their fastest laps times from the two shorter 7-lap qualifying races held on Saturday.

The one-hour race, which could be run with a single driver or a two-driver pairing, also included a timed compulsory pitstop with a Balance of Performance, which determined the length of each car’s stop.

Polesitter Tim Edgell had a healthy lead over Lance Hughes when the Safety Car came out at around the 20-minute mark to retrieve the stricken Ford Mustang of Sam Collins, which suffered an axle failure.

Hughes and Edgell managed to dive into pit lane and do their compulsory stop before the safety car was deployed. Their early pit stops essentially giving them a two-lap advantage over the field who waited behind the Safety Car.

“Plan for us was to get me out of the car as fast as we could, and then get Andre in the car to do the rest of the race from about the 20-minute mark,” said Hughes.

“The safety car mixed it up a bit, and unfortunately for some of the other cars, it took them out of the game. Edgell was fast, and there was really only about half a second in race pace between the top group of cars,” said Heimgartner.

Following the resumption of the race after the Safety Car was called in, it was a battle between Edgell and Heimgartner, the former managing to win by 14.480s.

“I had a good start, got the lead out to about 18 seconds ahead of Lance which was pretty comfortable. We probably got hurt a little bit by the safety car in that race, but that’s ‘handicap’ racing,” said Edgell.

“Andre drove really well and he had a lot of pace, but my lead was back down to zero from the restart of the race after the Safety Car.”

“We had a really good weekend, three-second places across the qualifying races and the feature. The car ran really well, happy with how it’s going. Probably not as ‘hot-rodded’ as some of the others but it goes really well. Seemed to be an enjoyable weekend for everyone.”

An ecstatic Rob Wallace celebrated rounding out the podium with third place.

“We knew we had a fast car, a reliable car, just didn’t think we’d have the horsepower of the consistency to take it to the guys at the front. A podium is pretty special. Full credit to our little tiny team, who put in so much hard work into the car,” said Wallace.