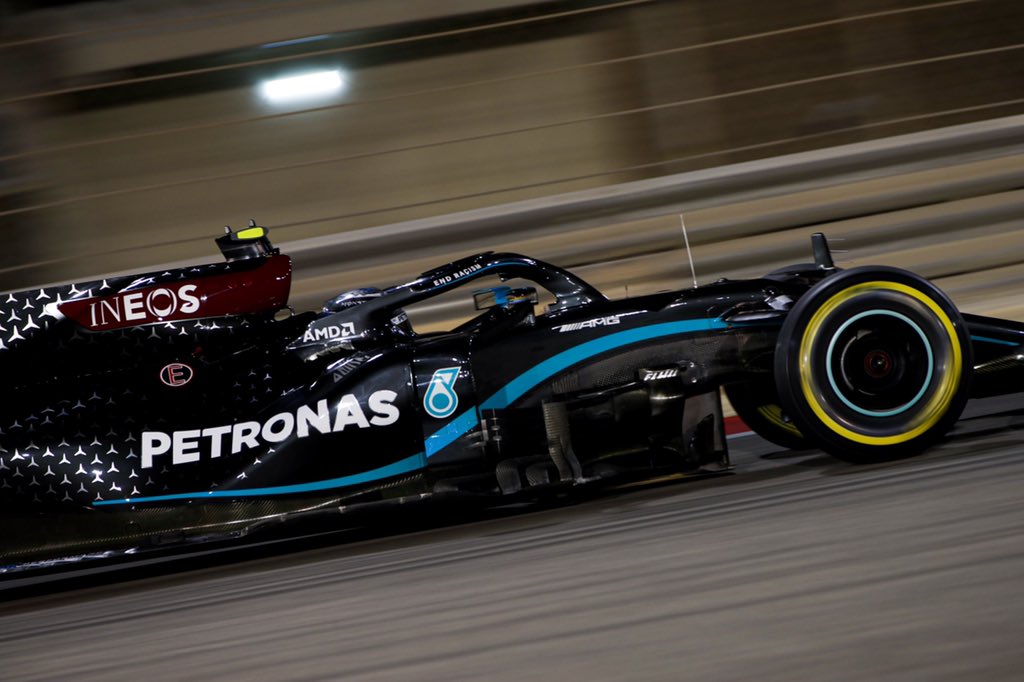 Valtteri Bottas has claimed a narrow pole position from George Russell and Max Verstappen in qualifying for the Formula 1 Sakhir Grand Prix.

Less than a tenth split the trio in the session which saw a late effort from Mercedes’ substitute driver come close to knocking Bottas off pole.

The Finn set his best time midway through the final phase of qualifying, and was unable to improve on his final effort as both Russell and Verstappen edged closer.

The short lap meant it was a slow start to Qualifying 1 before track action began in earnest.

Traffic proved not to be quite the drama many had predicted, though cars did queue up down the back straight.

Vaerstappen had a brief moment with Carlos Sainz, who left the track before shooting across the racing line to get out of the Dutchman’s way in the middle part of the lap.

It prompted the Red Bull driver to rhetorically ask over team radio what the McLaren driver was up to.

Notable was that Alex Albon ended the phase in 15th, less than a second clear of the drop zone.

Though the margins were tight, Red Bull had predicted the Thai driver would progress, and he was not even on track as the chequered flag fell.

Fewer cars on track for Qualifying 2 meant traffic was less of an issue, though that didn’t stop a moment on approach to Turn 1 as Sainz began the session’s first flying lap.

It saw Russell take to the run off inside the apex of the right hander to avoid Lando Norris as the pair exited pit lane.

Bottas and Russell set near identical times, split by just 0.16s in the Finn’s favour to see the two top the session early.

That became the leading five when Sainz went 0.031s slower than Perez at a time when both Ferrari’s found themselves outside the top 10.

Leclerc improved to move up to sixth with just under five minutes remaining in the phase, leaving Esteban Ocon, Pierre Gasly, Sebastian Vettel, Lando Norris, and Antonio Giovinazzi on the outer at that point.

Inside the final two minutes, all 15 remaining runners returned to the circuit ahead of a final flurry, all but the two Mercedes on soft compound tyres.

Norris was the first to start his flying lap, only to abort it exiting Turn 3 before completing another slow lap to go again.

Verstappen shot to the top with a 53.647s lap to end the session fastest from Perez, Bottas, Sainz, Russell, and Leclerc.

Missing out were Ocon, Albon, Vettel, Giovinazzi, and Norris who was 15th fastest, the Englishman reporting “my bad, I went too early” over the radio.

Bottas was the first to start a lap in Qualifying 3, Russell behind him on track, recording a 53.760s out of the gate.

That was soon bested by Verstappen who went to 53.591s, narrowly better than Leclerc who punched in with a lap just 0.022s slower for Ferrari.

Racing Point ran out of sequence, Perez and Stroll starting their first timed laps in Qualifying 3 as the bulk of the field had returned to the lane. That saw Perez slot in fourth fastest and Stroll eighth.

At Ferrari, Leclerc climbed out and watched on from the pit wall as Bottas returned to track on a fresh set of soft compound tyres.

The Mercedes driver duly converted, 53.377s to head a provisional one-two with Russell 0.142s slower with his second effort.

With less than a minute remaining the final flying laps began, Bottas unable to improve on his effort despite going faster in the third sector.

Russell was able to improve his time, but fell 0.026s off pole, with Verstappen ending the session 0.056s off Bottas’ time.

The 87-lap Sakhir Grand Prix is set to get underway at 04:10 AEDT on Monday morning.