Russell stars as he tops Friday practice for Sakhir GP

Russell stars as he tops Friday practice for Sakhir GP 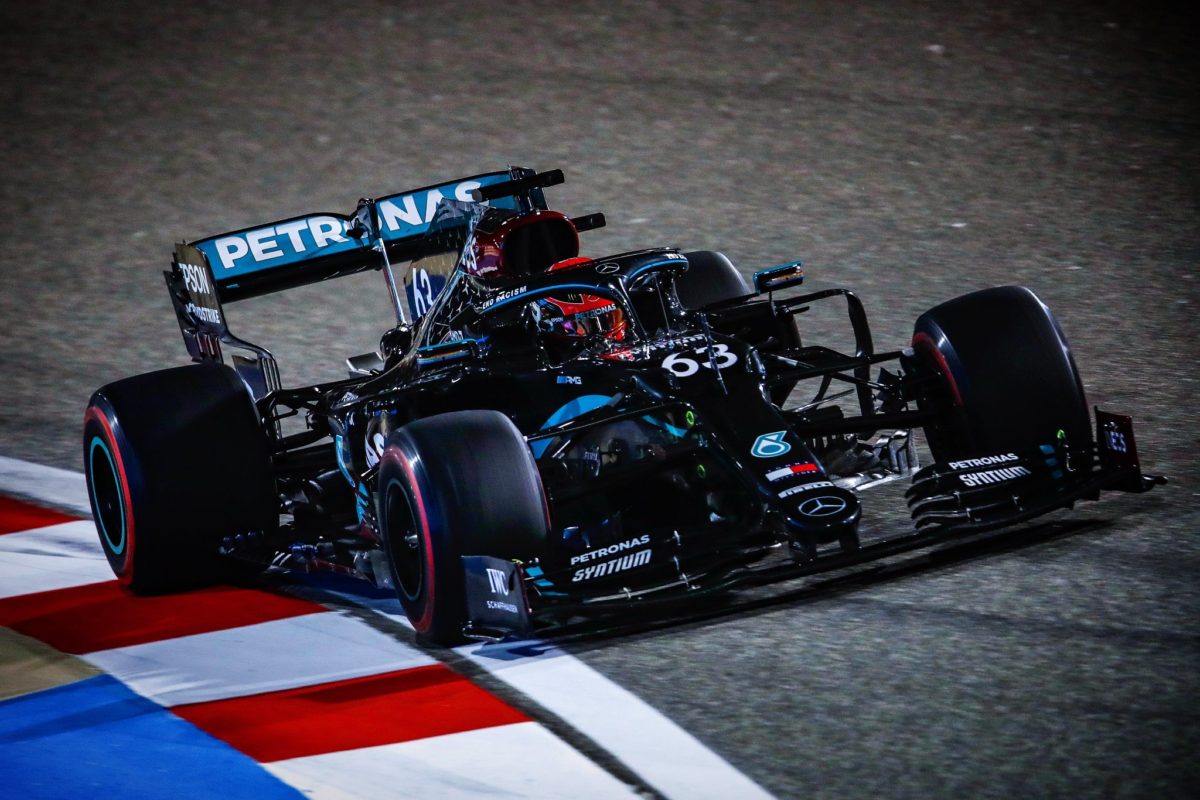 Mercedes substitute driver George Russell has starred on the opening day of practice for this weekend’s Formula 1 Sakhir Grand Prix.

The Englishman topped the opening session in the Mercedes usually occupied by Lewis Hamilton, who has been forced to miss the event with COVID-19.

Russell was similarly rapid in Free Practice 2, to again set the pace at the end of the 90-minute session.

It was a slow start to proceedings for the Williams regular, before improving to set the fastest time of the opening session at 54.546s, 0.176s quicker than anyone else.

By comparison, Valtteri Bottas in the sister-Mercedes could only must a 54.868s lap.

Russell’s best was a 54.713s as darkness fell on the Bahrain International Circuit and teams looked towards longer runs.

That was still more than a tenth clear of second placed Max Verstappen, though the Red Bull’s race pace looked a threat to Mercedes.

Bottas’ scrappy day, which saw him pinching brakes and running off the circuit, ended with him in 11th place with a best time in Practice 2 of 55.321s.

In terms of raw pace, the Finn demonstrated he had more speed, but lost laptimes due to track limits infringements, and like for like probably had the edge of Russell by 0.2s on a clear lap.

Alex Albon had been third fastest in Practice 1 but slipped to fifth in the later session as Sergio Perez and Esteban Ocon both improved, though their times slower than what the Red Bull had managed earlier.

AlphaTauri also put in a strong showing with Daniil Kvyat ending the day sixth in Practice 2 having been fifth, one spot up from team-mate Pierre Gasly, in Practice 1.

At the foot of the timesheets, Charles Leclerc failed to record a time courtesy of a driveshaft issue in FP2 while a power unit problem for Lando Norris cut short his running.

In the other McLaren, Carlos Sainz suffered gearbox synchronisation issues which cost him time in the garage but ultimately wound up 10th fastest.

Daniel Ricciardo finished the day with ninth and eighth place times across the two sessions, improving marginally in Practice 2.

However, the Australian trailed team-mate Ocon in both hit outs, by a tenth in Practice 1 before that deficit doubled in Practice 2.

Elsewhere debutants Pietro Fittipaldi and Jack Aitken brought up the rear of the field, the former 0.9s off his Haas team-mate Kevin Magnussen and the latter 0.4s shy of Nicholas Latifi in the other Williams in the opening 90-minute session.

The duo remained at the foot of the table in Practice 2, discounting Leclerc, though Fittipaldi found time in comparison to Magnussen to reduce his deficit to 0.4s.

Practice around the Outer Loop at the Bahrain International Circuit continues on Saturday (local time) ahead of qualifying at 04:00 AEDT Sunday morning.