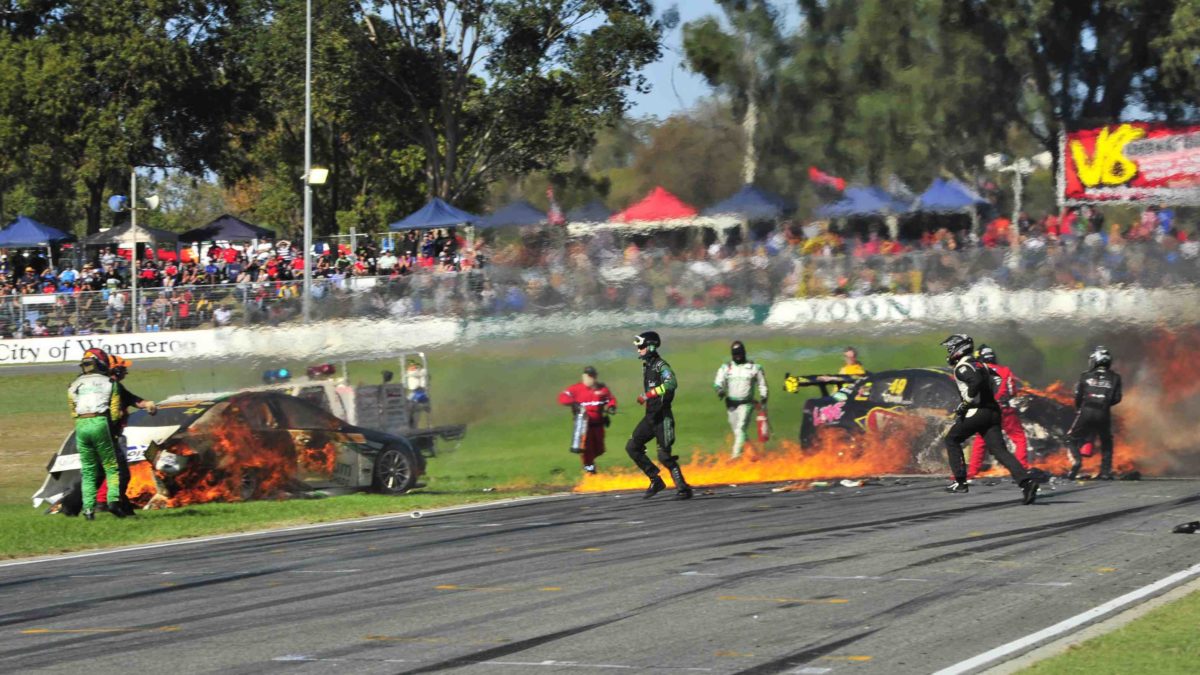 The Karl Reindler-Steve Owen crash at Wanneroo in 2011

Supercars Medical Delegate Dr Carl Le has outlined the category’s safety measures after Romain Grosjean’s horrific Bahrain crash, including the lessons learned from a fiery crash in Perth in 2011.

Grosjean escaped with little more than burns to his hands after his Haas Formula 1 car speared into an Armco fence and tore in two, immediately bursting in flames.

While 2020 was a relatively quiet year for Supercars with respect to on-track incidents, the championship is not a stranger to similarly frightening incidents.

As he would today, Dr Le was in the medical chase car at Wanneroo nine years ago when Karl Reindler stalled on the grid and was ploughed into by an unsighted Steve Owen, who had qualified six rows back.

A fireball erupted from the rear of the former’s Commodore, with flames also surrounding the latter’s machine, before both exited their vehicles.

Reindler suffered second degree burns to his hands while Owen incurred no serious injuries, and both contested the following event at Winton, three weeks later.

A key factor in preventing more serious and widespread burns is modern racewear, which offers around 30 seconds’ worth of protection from the heat caused by fire.

“All of these fire incidents are usually over within 30 seconds – they’re definitely over within a minute – because the reality is, each layer of fire protection, with the Nomex suits and such, affords about 10 seconds of protection,” Dr Le explained to Speedcafe.com.

“If you have the modern suit with the undergarments, there’s at least three layers there.

“In all racing, from club level up, you need to have wrist to ankle protection and obviously drivers also have fireproof boots and gloves.

“They wear the balaclava underneath the helmet and one of the interesting things is that car racing helmets are totally different from motorbike helmets because motorbike helmets don’t need to be fire retardant as car ones do.

“All the materials and even the chin strapping in car racing helmets need to be fireproof, to help in that.”

One element which played in Grosjean’s favour was the mandate to drive a Formula 1 car with a full, closed visor.

“One of the good things with the Grosjean crash is, because it’s an open cockpit car – even though it’s got the halo, which clearly saved his life – they all race with their visors down, which would have helped,” Dr Le added.

“As was reported, his visor was either completely melted or blackened from the fire.

“One of the concerns that I’ve always had with closed cockpit racing is it is allowable to have an open visor area, so quite a few of the drivers don’t have visors.

“That’s a risk that is unfortunately mandated by the FIA as an acceptable risk.”

The Reindler-Owen incident was exacerbated by the placement of the fuel cell in the Project Blueprint-specification cars of the day, being behind the rear axle centreline and therefore more vulnerable to rupture when such collisions occurred.

Moving the cell forward of the rear axle with the advent of Car of the Future in 2013, however, is not the only carefully considered safety feature of a modern Supercar.

Drivers must themselves meet an extrication time (maximum seven seconds from driver’s door, 12 seconds through opposite door), and many items which might impede their exit are designed such that they are easily released.

Various kill switches and extinguishers are also easily accessible for drivers and responders.

“(Regarding) a lot of the other equipment, it’s mandated that they be disconnectable just by tugging them, so there’s nothing sort of locking the driver into the car, including the communications, drinking tubes, cooling ducts…,” Dr Le continued.

“Things like doors need to have operational door pulls from the inside, the FIA nets all need to be released with one hand, and all the racing cars have fire switches and kill switches inside and outside the car, so they’re all standardised.”

Grosjean’s escape was a combined effort from the Frenchman himself as well as a local fire marshal, F1 Medical Delegate Dr Ian Roberts, and his Medical Car driver, Alan van der Merwe.

Like their F1 counterparts, the Supercars’ medical team follows the field on the opening lap with its own extinguishers.

Those extinguishers are a powder variety, which is more effective than liquid, while Supercars also requires four fire personnel on the track at race start.

“One of the biggest differences between Supercars and Formula 1 is that Supercars also has a fire vehicle that follows the first lap,” Dr Le explained.

“We used to have much higher field numbers as well, but then also after the Reindler crash, it was mandated that they have to have a vehicle or vehicles with four firies able to respond, so we have more emergency vehicles behind the field.

“You’ll see the medical car flanked by one or two fire vehicles and a recovery vehicle, which is important to be able to remove any crashed car from the straight, given some of the short circuits we go to as well.

“It was pretty clear that there was a local fire official that came to the aid (of Grosjean) and then the medical car driver grabs the fire extinguisher as well, which is exactly what we did (in the Reindler case). I have a fire extinguisher and a fire blanket myself, for instances like this.”

Extrication is already a carefully considered process, but attending to a crash where there are flames represents an even greater cocktail of risks.

However, one easily overlooked aspect of fire is the threat of inhalation, which is more subtle than burns but also has longer lasting, more severe health effects.

“The priority with fire, apart from any potential burns, is the inhalation,” stated Dr Le.

“One of the first things we see, the skin and burns, is something we can deal with later.

“The thing that will kill someone is inhalation burns or just inhalation itself through lack of oxygen, so that’s what really needs to be addressed.

“If we go back even further, back to Niki Lauda, the worst injury he had from being in his old race car was the inhalation burns which damaged his lungs. That was much worse than any skin burn.

“Obviously, cosmetically, skin burns are terrible, but it’s more your airways and breathing that are priority there.”

Dr Le has been the Supercars Medical Delegate since 2008, during which time he has continued to refine response procedures with some of the category’s unique factors in mind.

As well as being one of the first on scene in the event of a major crash, he effectively functions as the competitors’ general practitioner.

That means dealing with any number of medical issues which may arise at the circuit, with recent matters including Scott Pye’s illness in Newcastle last year and Garry Jacobson’s ankle cyst at the start of the 2020 season.