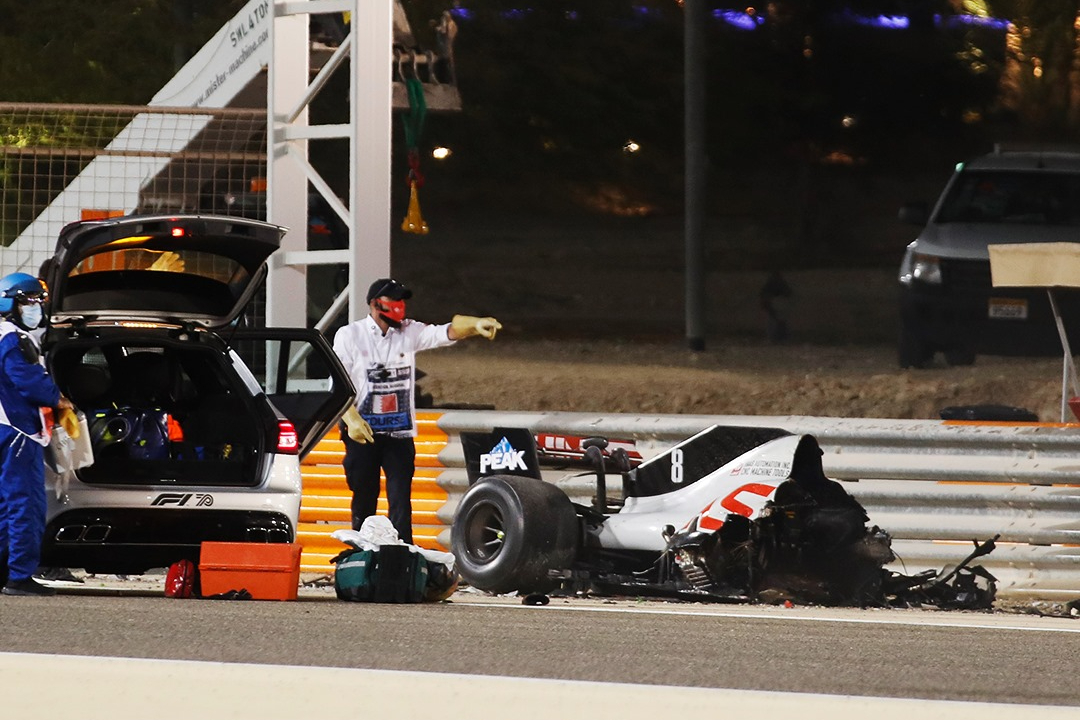 The impact tore the car in two and resulted in a major fireball, with the broadcast following the cars to the pit lane after the reg flag was waved.

Once Grosjean was seen in the medical car, several replays were shown of the incident as drivers and teams lined up in pit lane.

However, the decision to show extensive replays of the incident enraged Renault driver Ricciardo, who labelled the broadcast as “disgusting”.

“I want to express my disgust and disappointment with Formula 1,” Ricciardo said.

“The way the incident of Grosjean was broadcast over and over, the replays over and over, it was completely disrespectful and inconsiderate for his family, for all of our families watching.

“We’re going to go race again in an hour and every time we look on the TV it’s a ball of fire and his car’s cut in half. I mean we can see that tomorrow, we don’t need to see it today.

“For me, it was entertainment and they’re playing with all of our emotions and I thought it was pretty disgusting.”

Four-time world champion Sebastian Vettel agreed, saying: “I disagree with the fact that you have to show the images over and over again.

“We are human beings racing and not objects… I know that people like cars being on fire and crashes and it’s exciting.

“But maybe something we can learn as well is that we don’t need to repeat showing these images.”

An F1 spokesperson stated normal broadcast protocol was followed, where no accident replays would be shown until the driver’s condition was known.

“Firstly, at F1 this isn’t about entertainment and a few procedures and protocols are in place before any decision to run a replay is made,” the spokesperson said.

“Following an accident, all onboards, helicopter feeds etc are cut. There are direct comms between race control and the broadcast centre.

“No footage is shown until there is confirmation that the driver is okay. On this occasion at this point F1 showed Romain with the ambulance, helmet off and walking with aid.

“No replays of an accident are shown until there is approval and confirmation from race control/FIA that all persons are safe (driver, marshals, doctors etc). Replays then started.”

Grosjean’s accident made international headlines, with broadcast vision and images of the crash widely disseminated across the media and social media.

Teams and drivers have also posted images of the aftermath, with images published of a shaken Grosjean being helped by medical staff.

The spokesperson said live broadcast context for the viewer is crucial, where footage and commentary can be used to provide an understanding of the incident and the response.

“The context of what a viewer sees and hears with the commentary is important, with them talking about the safety of Romain, the halo, FIA safety improvements, and updates from the medical centre,” the spokesperson continued.

“There is constant dialogue between F1, FIA /race control, and sound judgement on viewers, families and those affected.”

Grosjean’s team boss Guenther Steiner said viewers deserve to understand what happens in a major incident, but acknowledged there the line shouldn’t be crossed should the outcome be worse.

“My opinion is it ended lucky and nothing bad happened, so why not show it to make sure people understand?” Steiner said after the race.

“Yeah it was bad, but everybody is okay. That was how we wanted to deal with it, we wanted to get the news out as soon as possible to people, ‘Romain is okay, guys’.

“If we can send one message via TV and stuff like this, this is much more powerful.

“If something bad happens it shouldn’t be shown… I’m not an expert in TV ethics but in my opinion, a good thing was shown.”