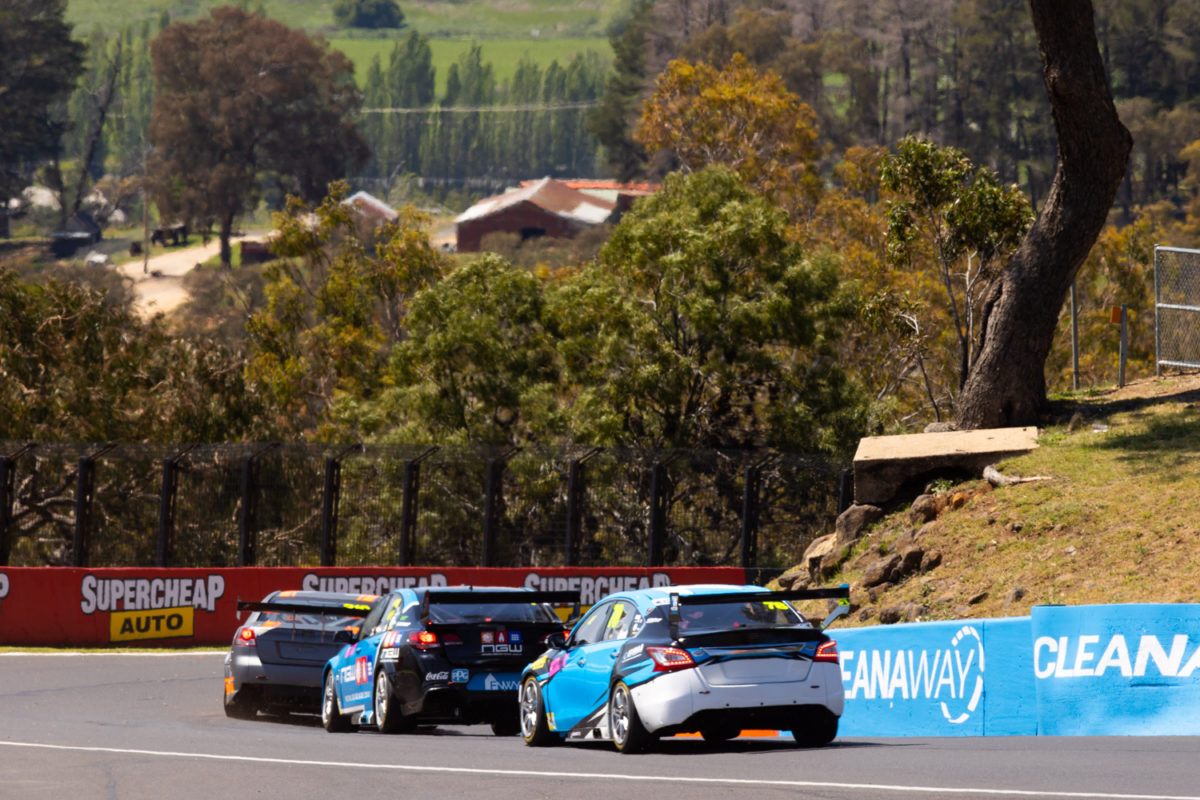 Super2 and Super3 competitors at the Supercheap Auto Bathurst 1000 event

Super3 will run as a class within the Super2 field again in 2021, management of both series have announced.

The Dunlop Super2 Series and the Australian Racing Group-owned Super3 shared a grid when the former’s season recommenced in July at Sydney Motorsport Park, representing the latter’s season-opener.

That agreement was to have persisted for the remainder of the year and indeed it did, but only for one round more given further disruption relating to the COVID-19 pandemic.

It will continue in 2021 also, with competitors once again racing for series points in their own classes.

However, the third tier will now be known as the ‘Dunlop Super3 Series’ and join Super2 in running on such 18-inch tyres, having continue to use Kumho hoops this year.

As previously confirmed, the calendar is set to span six rounds on the Repco Supercars Championship bill.

Super2 Category Manager Mark Galbraith remarked, “Fans love it. The drivers put everything on the line every time they put on the helmet and they get to race at some of the biggest events on the Supercars calendar.

“The competition has always been exceptional. This is due in large to teams investing heavily in young talent, not only behind the wheel but in the workshop, developing the careers of engineers and mechanics.

“Over 20 years we’ve seen the category’s level of talent rise year on year and we’re already receiving interest from teams who want to be on the grid in 2021.”

Galbraith’s Super3 counterpart, Liam Curkpatrick, added, “It’s great that the two series have been able to merge again to showcase a large, strong field of Supercars.

“The grid share arrangement worked well in the two rounds we managed to combine for this year. The teams liked it and the racing was great in both Series.

“During these uncertain times, this arrangement offers the entire field more certainty and fantastic opportunities.

“The V8 Touring Car/Super3 Series enters its 14th year of competition in 2021. The Series has come a long way and seen many drivers pass through, often on to Super2, and go on to do fantastic things. Many drivers have also stayed with us over the years enjoying what the Series offers.

“We have always worked closely with Supercars and for Super2 and Super3 to now be sharing a grid provides an even stronger driver pathway.”

No Super3 Series winner was awarded this year given only rounds at Sydney and the Supercheap Auto Bathurst 1000 went ahead, although MW Motorsport’s Jaylyn Robotham won both in the class.

His team-mate, Thomas Randle, won the Super2 title, but only learned of that officially just over a week after the Mount Panorama event.

Motorsport Australia will still award full Superlicence points for both series, despite the heavily abbreviated seasons.

Super2/Super3 will be again shown on Fox Sports in 2021, with selected races live on the Seven Network under Supercars’ new television deal which commences next year.