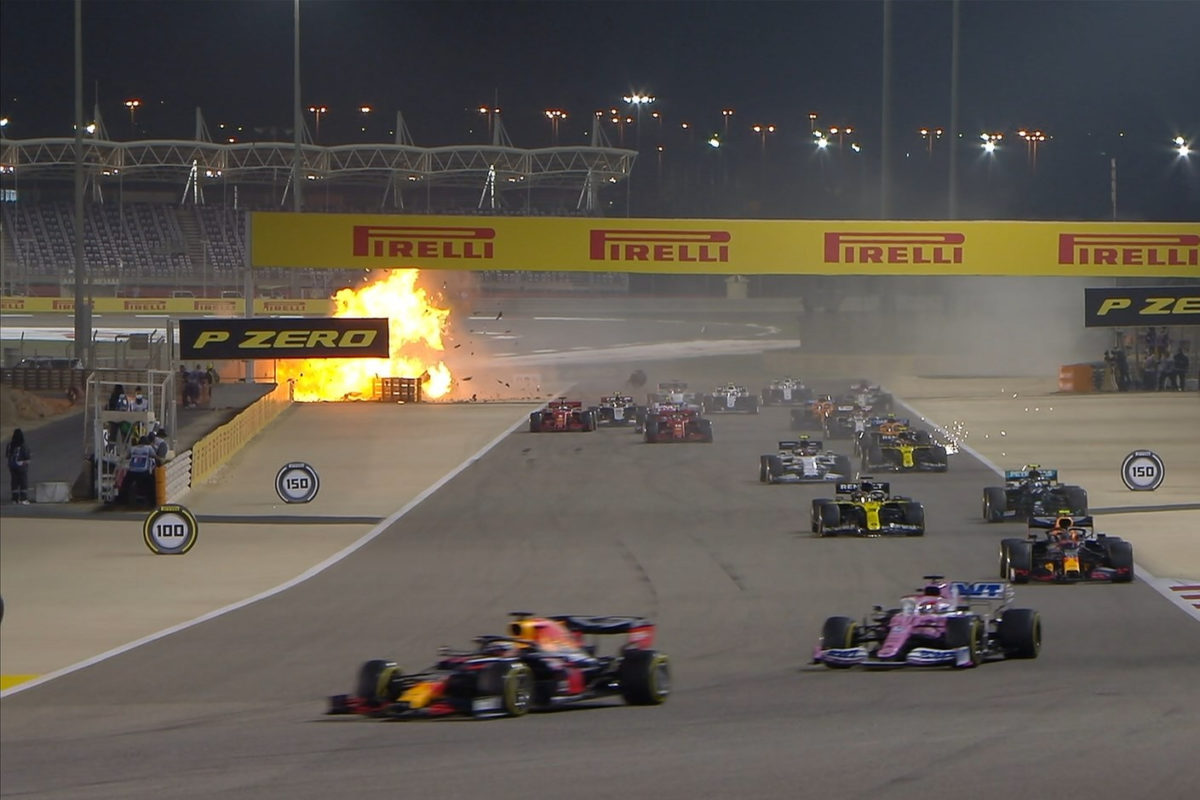 Daniel Ricciardo said he was “disgusted” by Formula 1 showing multiple replays of Romain Grosjean’s horror crash during the red flag delay of the Bahrain Grand Prix.

The Haas driver speared into the barriers exiting Turn 3 on the opening lap following contact with AlphaTauri’s Daniil Kvyat.

The car was torn in half and the survival cell engulfed in flames as the Frenchman clambered out to safety, before he was airlifted to hospital for treatment to burns on his hands.

The race, which was later won by Mercedes’ Lewis Hamilton, was immediately halted and remained so for an hour and 25 minutes, with drivers and teams consigned to replays of the crash while the field was lined in pit lane.

Grosjean was later cleared of fractures, but will remain in hospital overnight.

Ricciardo, who finished the race in seventh, slammed F1 for repeatedly replaying the crash during the stoppage.

“I want to express my disgust and disappointment with Formula 1,” the Renault driver told Ziggo TV after the race.

“The way the incident of Grosjean was broadcast over and over, the replays over and over, it was completely disrespectful and inconsiderate for his family, for all of our families watching.

“We’re going to go race again in an hour and every time we look on the TV it’s a ball of fire and his car’s cut in half. I mean we can see that tomorrow, we don’t need to see it today.

“For me, it was entertainment and they’re playing with all of our emotions and I thought it was pretty disgusting. So hopefully some other drivers have spoke up.

“But if that’s not how we all really feel then I’d be very surprised.”

Grosjean’s countryman, AlphaTauri’s Pierre Gasly, was also left shocked after seeing the replays of the accident during the red flag period.

“Honestly it was horrible,” Gasly said.

“Initially I didn’t know what had happened and when I saw the images I was shocked because from my generation I have never seen things like this.

“In the past it was more common but it was really scary. When I saw Romain had got out of the car I was happy to see him jumping out. I had no idea that Formula 1 cars could break that way and especially go through the barriers.

“The Halo seemed to be particularly working and during the red flag I sent him a text wishing him a good recovery. It was just a really scary thing to see.”

Mercedes’ Valtteri Bottas added there should be a limit on how many times a replay of a serious accident is shown.

“When there is a crash, when it ends up being okay for the drivers, they like to repeat those,” Bottas said.

“I feel like people, spectators want to see it. But there’s a limit as well.

“It could have been a fraction different, the shunt, and there would have been no way for him to get out of the car. So yeah, there’s a limit on it.

“I was watching the screen because I wanted to see what happened. Once I saw it, I was trying to avoid it, but it was playing on replay everywhere.

“I don’t know, maybe it’s a question for people watching, the fans, if they want to see 20 repeats of that or not.”