Hamilton: Grosjean crash could have been much worse

Hamilton: Grosjean crash could have been much worse 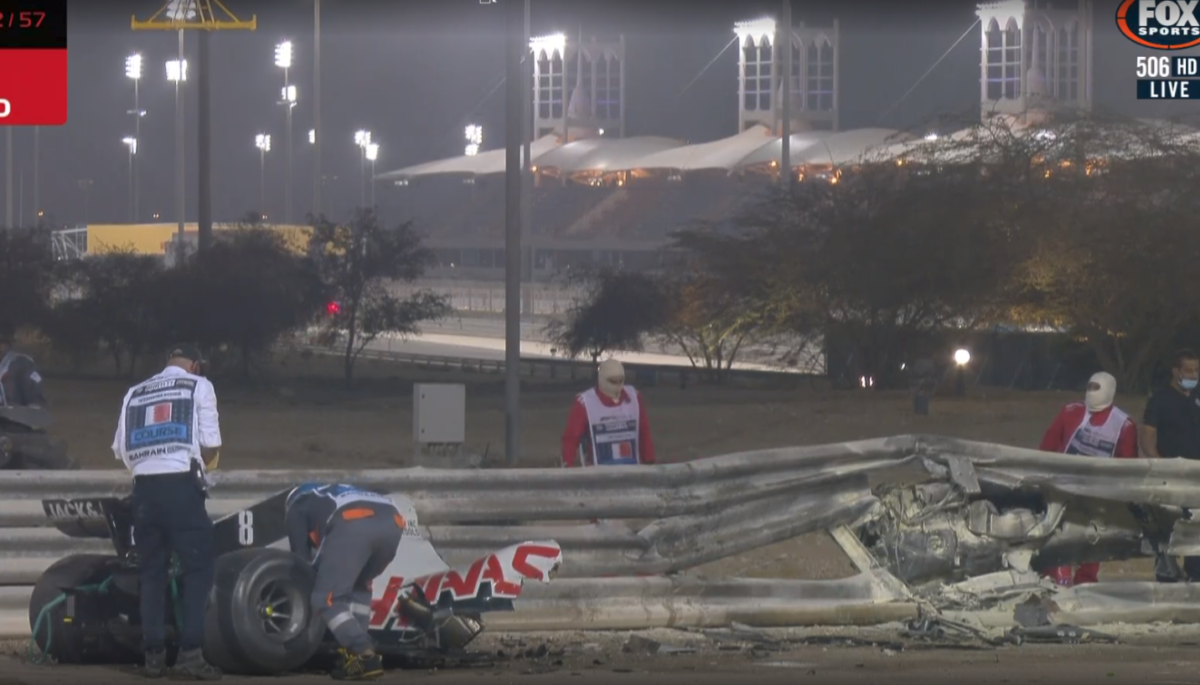 The remnants of Grosjean’s crash, the survival cell embedded in the barrier (right) pic: Fox Sports

Lewis Hamilton has confessed Romain Grosjean’s crash in the Bahrain Grand Prix could have been worse as he praised the efforts made by Formula 1 and the FIA.

The horrific opening lap crash saw the Haas torn in half, catching fire and piercing an armco barrier in terrifying fashion.

Miraculously, Grosjean was able to climb from what remained of his Haas, helped by speedy support of marshals and medical crews who were on the scene within seconds.

“It was such a shocking image to see,” Hamilton said of the incident which triggered a more than one hour red flag.

“When I get in the car, I know that I’m taking risk. I respect the dangers that are in this sport, and I think, I posted about it whilst I was in that break because it’s horrifying.

“It could have been so much worse.”

Hamilton took the opportunity to pay tribute to the advancements made in terms of safety in the sport, which has seen the introduction of items such as the halo in recent years.

All cars undergo mandatory crash testing pre-season before being allowed to compete, while medical crews are well resourced and drilled.

“I think it’s a reminder to us, and hopefully to the people that are watching that this is a dangerous sport,” Hamilton reasoned.

“I think it shows the amazing job Formula 1 has done, the FIA has done over time to be able to walk away from something like that.

“Of course, that will be investigated and they will do a lot of work to try and make sure that doesn’t happen again.”

During the Bahrain Grand Prix, won by Hamilton, the FIA issued a brief statement regarding the incident after Grosjean was airlifted to hospital with burns and suspected broken ribs.

“The FIA advises that an incident occurred during the opening lap of the 2020 FIA Formula 1 Bahrain Grand Prix today, 29/11/2020, involving car #8, Romain Grosjean,” the statement read.

“The driver was immediately attended to by emergency and medical crews.

“The driver self-extricated, and was conscious at all times. He was taken to the medical centre before being transferred to Bahrain Defence Force (BDF) Hospital by helicopter where he is undergoing further evaluation.”