Grosjean: I wouldn’t be here without the halo

Grosjean: I wouldn’t be here without the halo 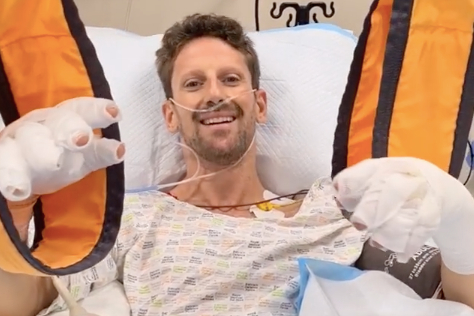 Romain Grosjean believes the halo safety device saved his life in his horror crash at the start of the Bahrain Grand Prix.

The Haas driver speared into the armco barriers exiting Turn 3 on the opening lap, with his car ripping in two following a 220km/h, 50g impact.

The monocoque, with Grosjean still strapped in, was engulfed in flames as it remained lodged in the barrier.

The Frenchman clambered from the burning wreckage and was attended to trackside by FIA medical staff, before he was airlifted to the Bahrain Defence Force hospital where he was found to have sustained second degree burns to the back of both hands.

The 34-year-old later took to social media to praise those who helped him escape major injury, and paid particular tribute to the halo device which has been mandatory on F1 cars since 2018.

“Hello everyone, I just wanted to say I am okay… well, sort of okay,” he said, referring to the bandages on his hands.

“Thank you very much for all the messages.

“I wasn’t for the halo some years ago, but I think it’s the greatest thing that we’ve brought to Formula 1, and without it I wouldn’t be able to speak to you today.

“So thanks to all the medical staff at the circuit, at the hospital, and hopefully I can write you quite soon some messages and tell you how it’s going.”

The 34-year-old avoided fractures, but he will remain under further observation from doctors overnight.

FIA F1 Race Director Michael Masi later confirmed an investigation into the crash was underway after the race, which was won by Mercedes’ Lewis Hamilton.