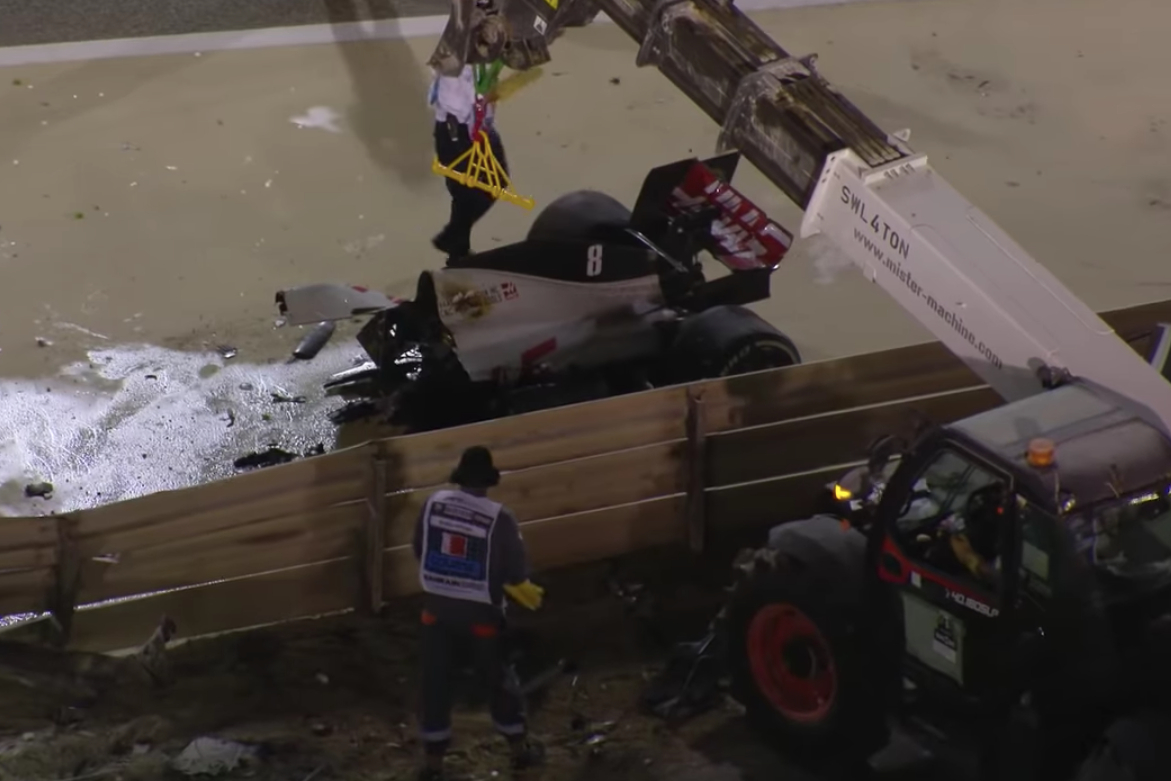 The back of Romain Grosjean’s damaged car pic: Fox Sports

Drivers have opened up on the frightening accident involving Romain Grosjean, which forced an early stoppage to the Bahrain Grand Prix.

Contact with AlphaTauri’s Daniil Kvyat at the exit of Turn 3 on the opening lap fired Grosjean’s Haas into the inside armco barrier.

The 220km/h, 50g impact tore the car in two, with the monocoque going through the barrier and bursting into flames.

Grosjean managed to escape to safety and was airlifted to hospital with minor burns to his hands, with scans confirming he had avoided broken bones.

Medical response crews were lauded in their contribution to Grosjean’s survival, while the driver himself and Ross Brawn credited the halo safety device for saving the 34-year-old’s life.

However, Formula 1 earned the ire of Renault’s Daniel Ricciardo for showing several replays of the accident during the red flag delay.

The accident was a reminder of the dangers of motorsport, and eventual race winner Lewis Hamilton, who admitted the outcome could have been much worse, conceded he was horrified when he saw the footage.

“Naturally it was terrifying to see,” the Mercedes driver said.

“I haven’t seen something like that for a long, long time and it really hits home for a driver, because I think whilst we all are competing for each other and want to beat each other we definitely, I would think, want safety for everyone.

“I’m really grateful that he’s safe and was able to get out. But I think it’s a real stark reminder of just how dangerous this sport can be.

“I’m sure there’s people that have tuned in that have never seen something like that and it just shows that these things can happen. I think we’re aware of that and the risks we take… now everyone else is.”

Kvyat admitted he was initially frustrated at Grosjean for moving across on him, but turned his focus to his rival’s safety.

“It was a scary moment,” Kvyat said.

“I saw him and at first I was really angry he came across at me like this, I thought, ‘What is he doing?’

“But then my mind changed immediately when I saw in my mirrors the fire and I was just hoping he was okay.

“I didn’t like what I saw in my mirrors and I’m glad he’s okay. This just reminds you what we do is dangerous.”

George Russell was running near Grosjean when the crash happened, with the Williams driver seeing the incident unfold in his mirrors.

“It was like something out of a movie, to be honest, where it just blows up in flames,” Russell said.

“Obviously when I came back round after the red flag I still saw it was on fire which was incredibly worrying.

“Incredibly thankful that we have the halo. There is no doubt it would have been a different outcome – no doubt – had the halo not been there.

“Everyone can say what they want but that is a massive step forwards. Just pleased he is okay. And proud of the job the FIA and F1 have done for safety over the years.”

Kevin Magnussen praised the halo device, which was introduced in 2018, for keeping his Haas team-mate safe.

“To see him survive that is frankly a miracle,” Magnussen said.

“So happy that the halo was introduced, that we have this thing on the car, because without that surely it would have been very different.

“I’m very, very happy to see Romain walk away from that crash.”

Ferrari’s Charles Leclerc said he radioed his team immediately after the accident, asking if the drivers involved were okay.

“I saw it live in my mirrors and I came straight away on the radio, I was very worried if you hear my radio messages,” the Monagasque said.

“Obviously I just wanted to have the good news that Romain was okay. Arriving into Turn 9 I still had no news and I saw the fire so I was starting to worry a lot.

“But luckily he’s fine but I don’t know how fine he is let’s say, but the good thing is he jumped out of the car, and it’s incredible.”

Max Verstappen, who finished second behind Hamilton, said criticisms of the halo’s aesthetic value may now cease due to its role in protecting Grosjean.

“When I saw the flames… that was pretty scary to watch but luckily he jumped out of the car himself and that was the most important, and you could really see the safety, how much it has improved,” the Red Bull driver said.

“I think also the halo today saved his life. In the beginning when it came onto the car I was quite critical about it that it looked ugly.

“You can’t say anything about the safety because today it definitely saved Romain so I’m very happy with that.”