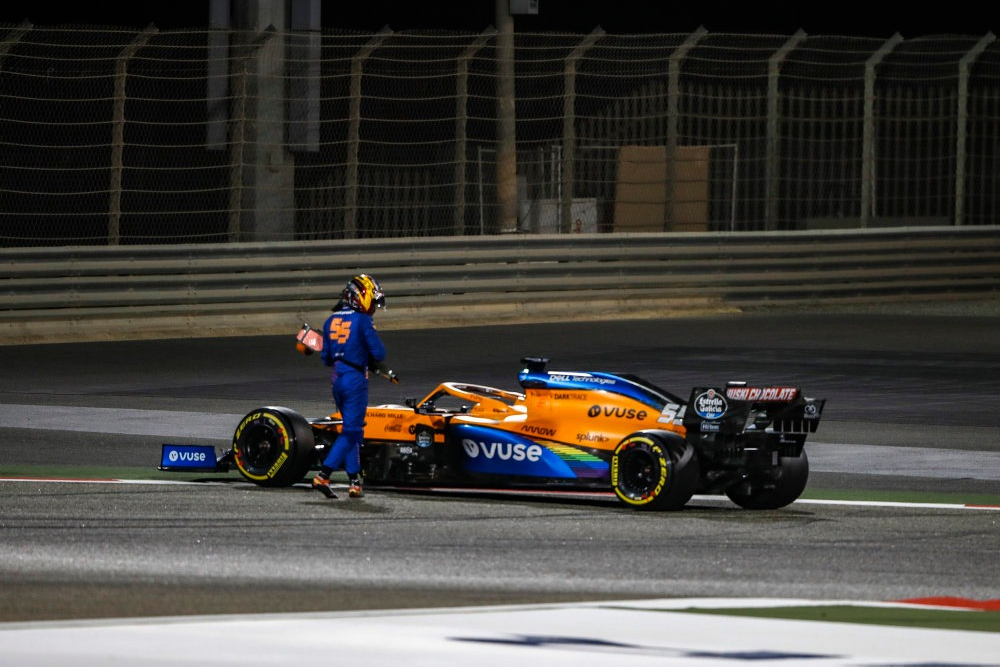 Sainz and Lando Norris were fifth and seventh respectively in a promising Free Practice 3 outing, with McLaren five points behind third-placed Racing Point in the constructors’ standings.

However, after showing strong pace in Q1, Sainz’s Saturday came to a spinning end following a high-speed brake failure, while Norris could only manage ninth.

When Sainz hit the brakes at 300km/h heading into Turn 1 on his first Q2 run, a brake-by-wire failure locked the rear axle and his car swapped ends, bringing out the red flag.

Critically, with the front runners opting to run the medium compound in Q2, not only did it mean that Sainz will start 15th, but he also ruined a set of the tyres that he needed for the race.

The current rules only allow tyres damaged in qualifying to be replaced if they are the set that a driver will start on. Because Sainz did not progress to Q3, the tyres must be discarded.

That leaves Sainz with used medium tyres for the race at the high-degradation Sakhir circuit, the Spaniard ruing the failure.

“There’s pace in the car, no doubt about that and I felt really, really at home the whole weekend,” he said.

“The problem is the strategic options available for us with the tyres we’ve got, we’ve been trying to save those harder set of tyres for the race and at the moment I don’t know what I’m going to have available tomorrow with the problems I’ve had today.

“For us to have that problem with the medium tyre flat-spotted and lose it probably for the race is worst possible scenario.”

McLaren later diagnosed a brake-by-wire failure, although that was little consolation for Sainz, who fears his race has now been compromised.

“You obviously get out there at 300km/h and you hit the brakes and suddenly the rear brakes locked completely,” said Sainz, explaining the incident.

“I don’t know really what happened, we don’t know what really is the cause of the problem, but I’m very disappointed.

“I had just got through Q1 with only one set of tyres, I had just saved some softs for later in the qualifying.

“That set of mediums, it’s so important for this weekend and it looks like it is completely flat-spotted and I’m not going to be able to use it for the race.

Sainz arrived in Bahrain seventh in the drivers’ standings, one position and one point ahead of Norris.

Mercedes’ Lewis Hamilton will start from pole position for the Bahrain Grand Prix, which will commence at 01:10 AEDT Monday.