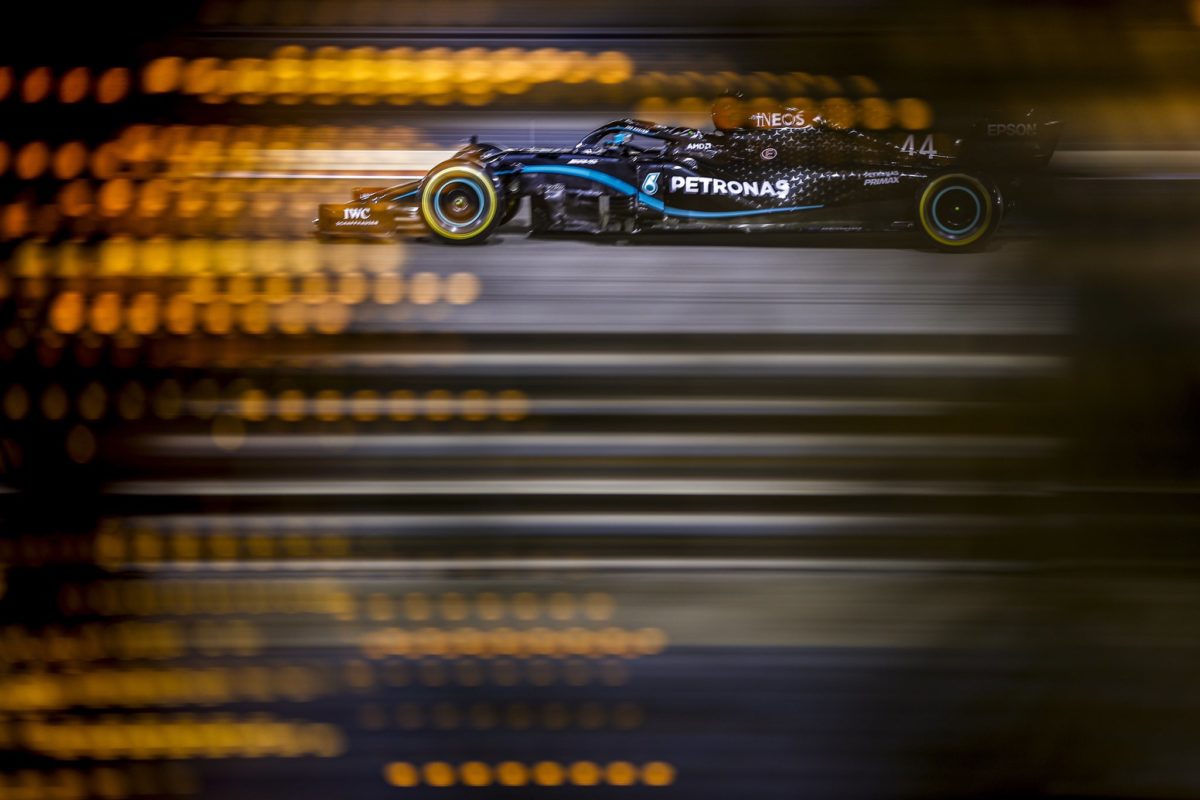 Lewis Hamilton has claimed the 98th Formula 1 pole position of his career with a track record lap ahead of the Bahrain Grand Prix.

Hamilton bossed the session to end up almost three tenths clear of team-mate Valtteri Bottas in a Mercedes front row lock out.

Max Verstappen will line up third with Alex Albon alongside him in the sister Red Bull, while a late lap from Sergio Perez relegated Daniel Ricciardo from fifth to sixth.

A slow start to the session saw Verstappen alone on track in the early minutes, following George Russell out on track after the Williams driver aborted his first timed lap.

It was therefore the Dutchman who recorded the first effort of the session, a 1:28.885s to kick off proceedings.

No sooner had Verstappen completed his lap that the field poured out of the lane with 11 minutes left in the opening phase of the three-part qualifying hour.

Hamilton promptly lowered the benchmark to to 1:28.343s with Bottas four tenths slower slotting in second.

A strong lap as the chequered flag fell moved Russell to eighth before slipping down the totem as those behind him on track also improved.

That saw Lance Stroll rise to second and Albon to third while both Alfa Romeos, Haas, and Nicholas Latifi (Williams) both fell out of the session.

Russell dropped to 14th at sessions end, Norris in 15th abandoning his final lap with the knowledge he’d made the cut in to the second phase of the session.

As it had been at the beginning of Qualifying 1, the track remained silent as the green light illuminated to signal the start of Qualifying 2.

With 12 minutes to run the field as one headed out on track, the majority opting for medium compound tyres.

AlphaTauri’s Pierre Gasly and Daniil Kvyat were the only two to opt for the soft compound rubber for their initial runs in the second part of the session.

Carlos Sainz had a spin at Turn 1 as he started his flying lap, triggering a red flag as the McLaren sat broadside to traffic without drive.

The session was halted with just over nine minutes remaining, the Spaniard having been pitched into a spin as the rear axle appeared to seize.

A swift recovery saw the session restarted with minimal delay for the remaining 14 runners, none of whom had set a time prior to the interruption.

Verstappen was the first on track to start a timed lap, having passed Norris on his out lap to give himself an unencumbered run.

The Red Bull driver recorded a 1:28.025s, his team-mate 0.7s slower after running wide at the final corner.

Hamilton improved on Verstappen’s effort in all three sectors to set a 1:27.586s, Bottas slotting in third just under 0.5s slower than his Mercedes team leader.

Following the error at the end of his first timed lap, Albon was one of those who elected for a second run in an effort to safeguard his passage into Qualifying 3.

That saw the Thai driver head out with a set of soft compound tyres, though it proved unnecessary and he was able to abandon the lap as Sebastian Vettel (Ferrari), Charles Leclerc (Ferrari), Stroll (Racing Point), Russell, and Sainz all missed the cut.

Albon only fell to fifth in the end, despite being 1.163s off Hamilton’s provisional pole time.

Crucially, as his best time was set on medium compound tyres, he’ll start Sunday’s race on the preferred tyre.

Norris set the early running as Qualifying 3 began, 1:29.029s his first effort which was promptly bested by Perez, Gasly, Hamilton, Verstappen, Bottas, Albon, and Esteban Ocon to fall to eighth.

Ricciardo’s first flyer was sluggish, 1.9s off the pace and 0.8s away from his Renault team-mate but with time for another lap.

Hamilton again established himself as the benchmark, Verstappen second 0.1s slower and Bottas a further 0.15s off the outright pace.

Mercedes sent both its drivers out again with four minutes to run, triggering a final flurry as the remaining 10 cars trundled back out.

To a man, the field had soft compound tyres fitted, tiptoeing around the out lap ahead of winding up for their timed lap.

Hamilton was the first to start his final tour, 0.07s faster than his own benchmark at the first split.

The Englishman carried that pace into the second split, improving to 0.235s quicker at the two-thirds marker.

Bottas improved to second, though 0.289s slower to leapfrog Verstappen, while Albon moved up to fourth with Ricciardo progressing to fifth.

That became sixth when Perez completed his lap, with Ocon seventh from Gasly, Norris, and Kvyat.

The result was Hamilton’s 98th career pole position, an impressive performance which left him nearly a third of a second quicker than Bottas could muster in the same machinery.

The Bahrain Grand Prix is scheduled to commence at 01:10 AEDT on Monday morning.