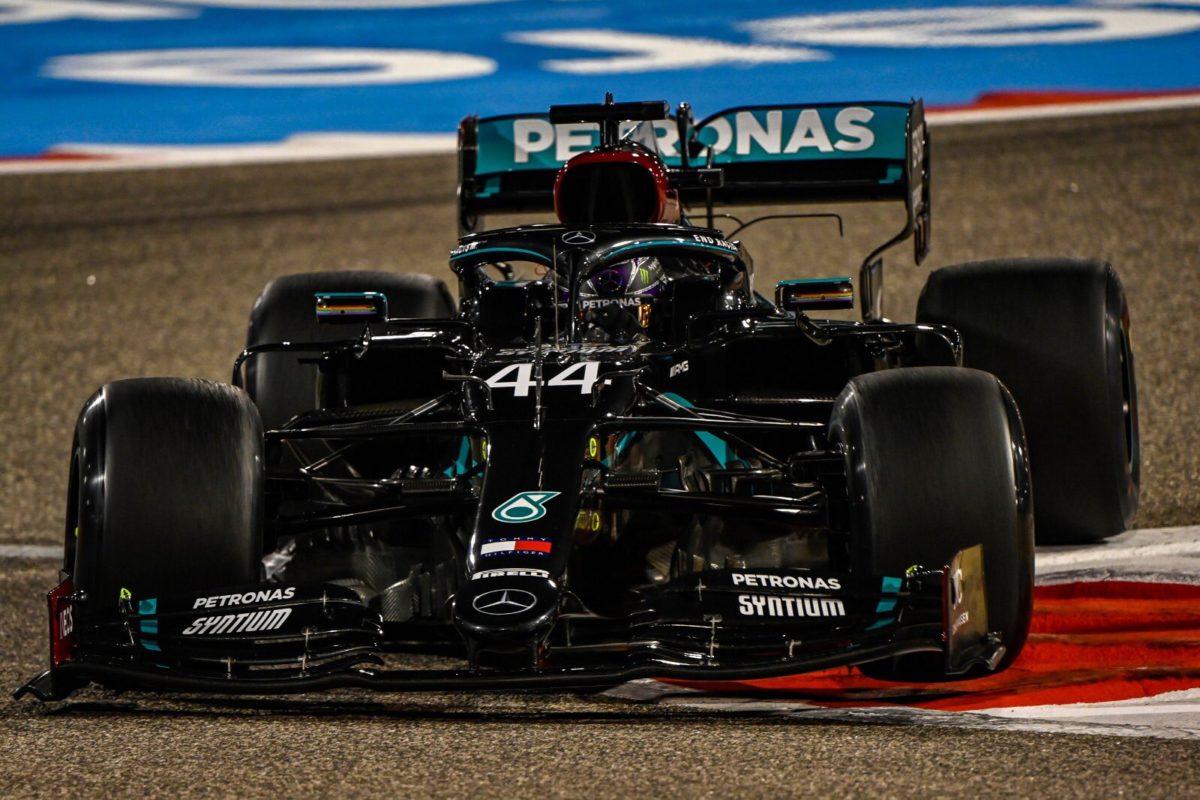 Lewis Hamilton has left Mercedes on top following the opening day of track action for the Bahrain Grand Prix as Alex Albon found the wall.

Hamilton topped both sessions while a mistake from Albon in Free Practice 2 saw the Red Bull driver damage his car and trigger a red flag.

Under pressure to retain his seat next season, the Thai driver was seventh fastest in the opening session before the FP2 mistake.

Rounding the final corner, Albon dropped a wheel over the kerb, the car snapping out of control and firing him into the barrier.

He ended the session 10th as a consequence, with 17 laps to his name – the fewest of any driver in the session.

By contrast, team-mate Max Verstappen had topped the timing screens for much of the session courtesy of an early flying lap.

The Dutchman’s ultimate pace was 1:29.318s as he demonstrated strong performance on the medium compound tyre.

Efforts to best that on the softer compound rubber proved difficult as all drivers struggled to maintain grip over the course of an entire lap.

Hamilton was able to produce a lap late in the session, moving 0.347s clear of Verstappen’s best, while Valtteri Bottas (Mercedes) was just 0.018s slower than the Red Bull in third.

It was similarly close between Sergio Perez (Racing Point) and Daniel Ricciardo (Renault) for fourth in the standings, with AlphaTauri’s Pierre Gasly also in the mix.

The Frenchman had been in contention in Practice 1, setting the fifth fastest time just over a second off Hamilton’s fastest time of the session.

McLaren’s pace was masked somewhat when Carlos Sainz had a flying effort interrupted by a red flag, triggered when a dog found its way onto the circuit.

Forced to abandon the lap, it left the Spaniard in 13th, 1.3s away from the pace and 0.5s away from team-mate Lando Norris in seventh.

Verstappen’s upswing in pace in Practice 2 came after ending the earlier 90-minute hit out just sixth.

That included a spin at the final corner though, unlike Albon, his proved innocuous beyond a set of flat spotted tyres.

Hamilton topped the opening session by more than 0.4s as Mercedes proved the class of the field, Perez in third almost a full second adrift.

Sainz offered a glimpse of McLaren’s potential with the fourth best time, on par with Perez, though Norris was just 18th.

Ferrari failed to break into the top 10 in either session, Charles Leclerc’s 11th in FP1 the best result for the Scuderia, though 1.556s away from Hamilton’s time.

The margin to the lead Ferrari reduced to 1.139s with Sebastian Vettel the higher placed of the squad’s two drivers as the field spread condensed by 1.1s in FP2.

Romain Grosjean had a spin at Turn 7 early in proceedings but was able to continue, setting the 14th fastest time in FP1 ahead of Kevin Magnussen in 15th in the second Haas.

The pair then slipped to 19th and 16th respectively in the day’s second session, Magnussen holding sway 1.8s away from the increased outright pace.

Practice for the Bahrain Grand Prix continues tomorrow (local time) with the final 60-minute session at 22:00 AEDT with qualifying to follow at 01:00 AEDT on Sunday morning.