Hamilton: People need to give Bottas ‘his due respect’

Hamilton: People need to give Bottas ‘his due respect’ 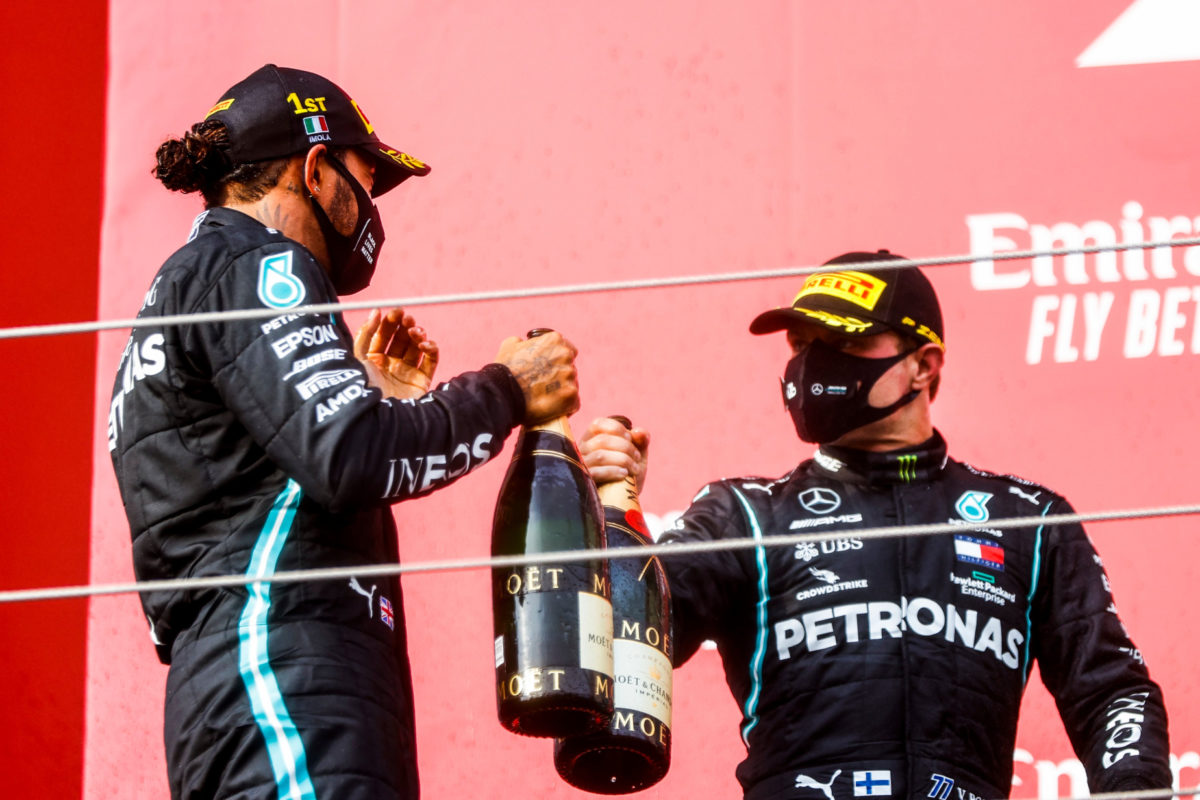 Lewis Hamilton has defended Mercedes team-mate Valtteri Bottas amid the lop-sided championship battle between the duo in 2020.

Hamilton clinched a seventh drivers’ championship with victory in slippery conditions in Turkey on a day Bottas finished a lap down in 14th.

While Hamilton nursed worn intermediate tyres for 50 laps to victory, Bottas spun six times in the tricky conditions and ceded the title to his team-mate.

Bottas began the season with a dominant victory in Austria, but followed up with an eight-race winless streak and was 55 points down on Hamilton after just the ninth round at Mugello.

A win in Sochi restored some confidence for the Finn, but a power unit failure at the next race at the Nurburgring all but ended Bottas’ already-faint title hopes.

Another failed title bid has raised questions over Bottas’ position at Mercedes, which he will hold into 2021 after he signed a one-year deal.

Hamilton cited his own consistency and acknowledged Bottas’ bad luck, which also included a tyre failure in the British Grand Prix.

However, the newly-crowned seven-time world champion insisted the margins between the two Mercedes drivers are tight.

“You can see that the consistency that I’ve had this year has made the difference, but if you look at the race weekends, we’re so close,” Hamilton told reporters in Bahrain.

“But the points gap of seven points, and that (opens up) consistently over time. Valtteri has also been unfortunate this year with reliability issues, it makes that gap even bigger than it is.

“People need to give Valtteri his due respect. I think you’ve got to remember who he’s driving up against. It’s not easy being my team-mate.

“But he comes weekend in weekend out with the same mentality, he’s never moaning or complaining that there’e something wrong with the car, it’s always, ‘I’ve got to do a better job’.

“I don’t know any other driver that does that here, and that’s something we share in common… Mentally, I think he’s one of the strongest drivers here.”

With three races remaining, Hamilton holds an unassailable 110-point lead over Bottas. Such is the gap between the Mercedes duo, that second-placed Bottas (on 197 points) is closer to sixth-placed Renault driver Daniel Ricciardo (96 points) than Hamilton (307 points).

Since Bottas joined Mercedes in 2017 following Nico Rosberg’s retirement, Hamilton has dominated the head-to-heads in race wins (40 to nine) and pole positions (36 to 15), with the Briton claiming all four drivers’ titles.

However, Hamilton believes Bottas has become formidable over one lap, which has helped him continue to raise his own game.

“Naturally, Valtteri is getting stronger and stronger each year,” Hamilton said.

“The media have commented on the ‘2.0’ and every year you can see him chipping away at trying to raise the bar in so many different areas.

“While the points gap is where it is, if you look at some of the qualifying (results), it was the smallest of margins.

“Closing the gap in qualifying, he has made it really quite challenging. He already had last year but I’d say even more so this year, I think.”

Free Practice 1 for this weekend’s Bahrain Grand Prix will commence at 22:00 AEDT tonight.