Following his final race with Monster Energy Yamaha MotoGP, Valentino Rossi said he was “thankful” to carry out a second stint with the factory following a torrid spell with Ducati.

The seven-time premier class champion will move to Petronas SRT Yamaha from 2021, with Fabio Quartararo replacing Rossi at the works squad.

In his first stint with Yamaha between 2004 and 2010, Rossi claimed titles in 2004, 2005, 2008 and 2009. After a torrid two-year stint with Ducati, which featured just three podiums, Rossi returned to Yamaha in 2013 and challenged for the 2015 world title, which fell the way of team-mate Jorge Lorenzo in a gripping championship fight.

However, Rossi’s final years with Yamaha featured little success, with the Italian winless since the 2017 Dutch TT.

“This is an important moment, because this is the end of our long journey together. Our history, between me and the Yamaha Factory Racing MotoGP Team, is divided into two parts – almost like a good movie, I think,” Rossi said.

“The first part is from the beginning in 2004 to 2010. I think that was the best part of my career. We wrote history for Yamaha. We were able to win the championship for Yamaha after twenty-something years. I will always remember these achievements, for sure, because they are key moments in my career too.

“But I’m also very proud of the second part… they gave me a chance to come back to the factory team after two bad years with another factory, when I was already ‘getting old’ by MotoGP-standards, so I was desperate.

“I will never forget the moment when Lin (Jarvis, Yamaha Managing Director) told me I would have a chance to come back here. I’ll always be thankful for that moment, because maybe I could also have stopped riding at that time if I wasn’t able to come back here.”

Rossi admitted his second Yamaha stint was “more difficult in terms of results” but acknowledged his 2015 title bid, which had it been successful, “could have changed our story”.

However, the 41-year-old remained gracious for his time in the top seat, which is now being handed to young gun Quartararo.

“Things happened the way they happened, and I’m still thankful for the support I got from Lin, Maio (Meregalli), and all the Japanese engineers,” he said.

“But especially I want to say ‘Thank you’ to my crew. We’ve been together for a long time. Bernie, Alex, Brent, Matteo, Mark, David, Idalio, and more.

“Next year I will still be riding a factory bike with full factory support, just in different colours. It’s true, I will not be sitting in the Yamaha Factory Racing garage, but I will be just next door… for sure we can still say hello.”

Jarvis paid tribute to the departing Rossi, saying the factory team is now facing a “changing of the guard”.

“It’s always sad to bid farewell, especially to people who have been such a vital part of the team. But nothing in life is continuous, nothing remains the same, and that’s also the nature of MotoGP,” Jarvis said.

“The situation in the paddock is constantly evolving. People come into the team, some leave, and some come back again.

“Though he is leaving the factory Yamaha MotoGP team, this is not the end of his career.

“This is not a complete farewell scenario, this is a transition moment. It’s important, regardless, because Valentino has been part of our team for so long. But next year he will be next door, so he will stay close.” 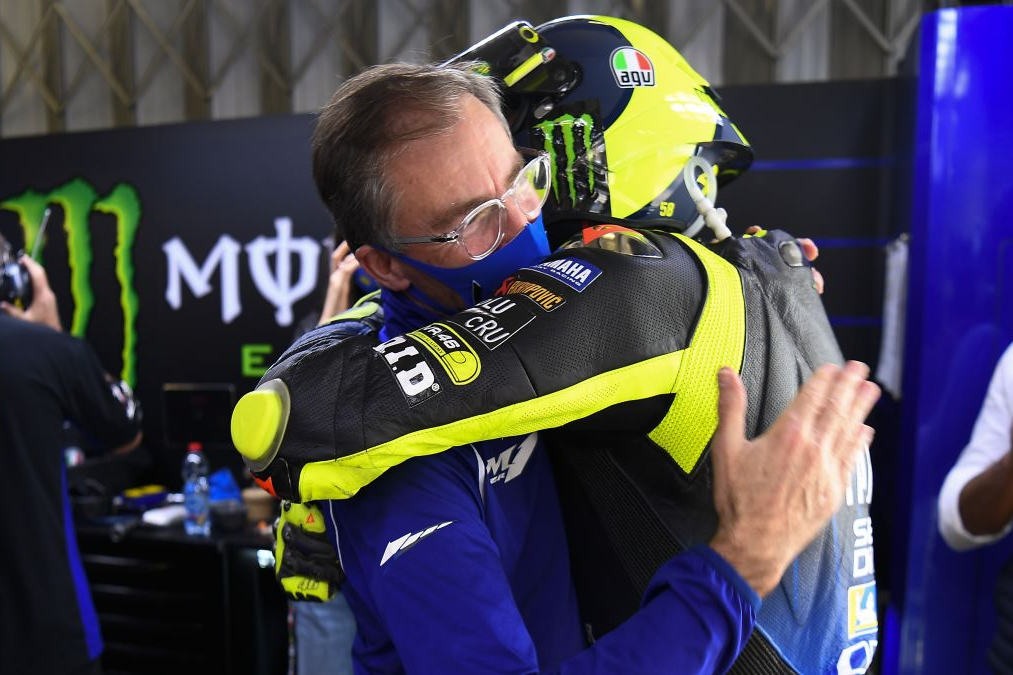