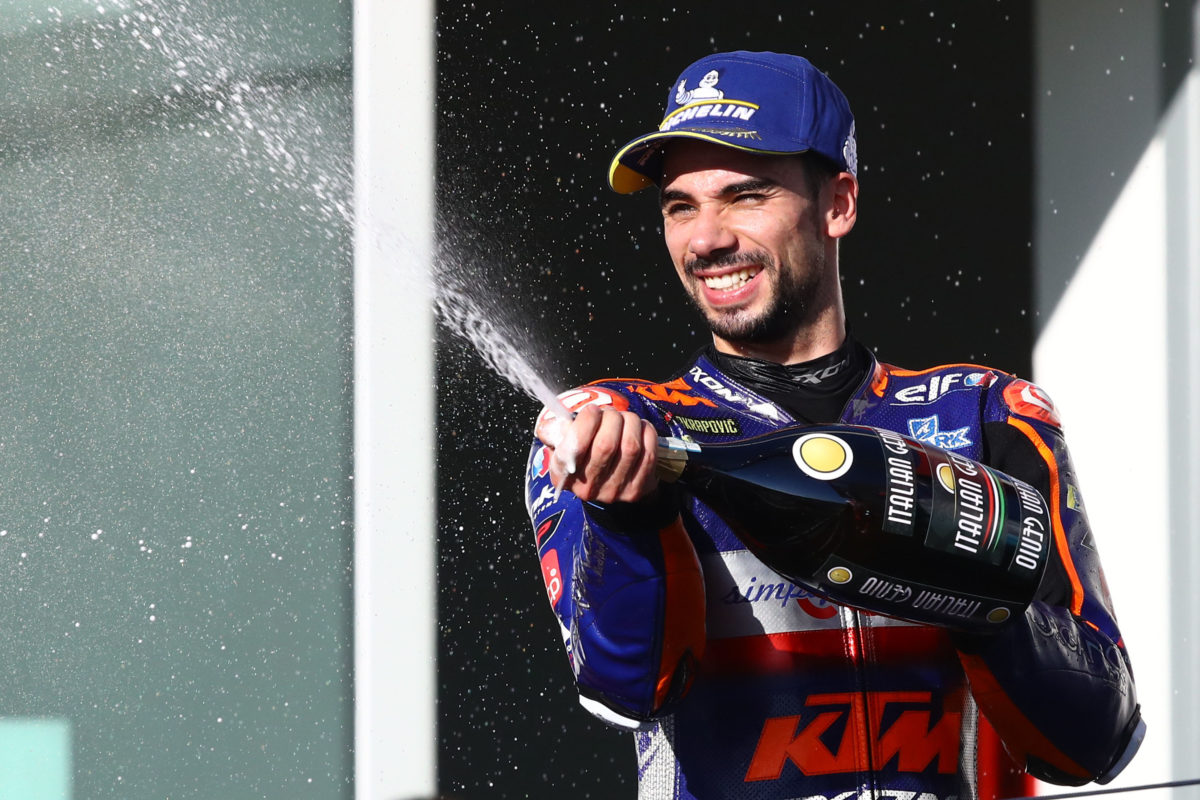 Miguel Oliveira has converted pole position into a dominant victory in his home MotoGP race in Portugal, while Jack Miller took second in the season finale with a final lap pass.

Oliveira put his Red Bull Tech3 KTM on pole at Portimao and led all 25 laps comfortably, while Miller stalked Franco Morbidelli for almost as long before he made his move on the second-last corner.

The runner-up finish in his final race for Pramac Racing saw the Australian not only secure seventh in the riders’ championship, but also meant that Ducati won the Constructor Championship.

In what was realistically a case of whichever had the higher finisher out of the Bologna marque and Suzuki, the latter was never really in the hunt, exemplified by a DNF for the newly crowned Joan Mir.

Oliveira got the jump when the lights went out and led the field away from Morbidelli, Miller, and Cal Crutchlow (Castrol LCR Honda), while a poor start saw Fabio Quartararo (Petronas SRT Yamaha) drop towards the back of the top 10.

Miller had a crack at Morbidelli at Turn 5 but could not pull off the move, and the Petronas SRT Yamaha rider was 0.6s behind #88 at the end of the standing lap.

Oliveira more than doubled his margin next time around and got as far as 4.6s up the road at one point, before taking the chequered flag for a 3.2s victory.

Miller spent the vast majority of the race tailing Morbidelli, who he gave only a temporary reprieve when he made a small error on Lap 18.

The Australian attacked on the final lap and while he was resisted at Turn 13, #43 swept ahead as they arrived at Turn 14 and that was that in the fight for second position.

Morbidelli nevertheless claimed second in the championship on an older spec YZR-M1, although that always looked likely given the struggles of his Yamaha stablemates and Suzuki Ecstar’s Alex Rins.

Pol Espargaro was the best of the rest on the day, albeit more than nine seconds away from the podium at the finish.

The outgoing Red Bull KTM Factory Racing rider passed Stefan Bradl for fifth at Turn 8 before the standing lap was out but gave the spot back when he sprayed well wide at Turn 2 on Lap 3.

Pol Espargaro, who is on his way to Repsol Honda next year, re-passed the #6 Repsol Honda on Lap 5, and got by the Castrol LCR Honda of Cal Crutchlow on Lap 7.

He and Crutchlow had a brief dice on Lap 12 when both made mistakes before #44 had a lonely run to fourth in the 13 laps which followed.

The rest of the top 10 and beyond, on the other hand, chopped and changed on a regular basis.

Crutchlow spent more time than anyone in fifth, before he was passed by Johann Zarco (Esponsorama Ducati) on Lap 18.

Andrea Dovizioso (Ducati Team) qualified only 12th but was achieving consistent race pace and so it was that he went by Zarco at the start of Lap 21, as Crutchlow sailed long at the Turn 2 kink.

Almost as soon as Dovizioso had moved into fifth, however, he was passed by Takaaki Nakagami (Idemitsu LCR Honda) and that was where the Japanese rider would finish.

In the end, the top 10 was rounded out by Dovizioso, Bradl, Aleix Espargaro (Gresini Aprilia), Alex Marquez (Repsol Honda), and Zarco.

The factory Monster Energy Yamahas ended up 11th and 12th in the hands of Maverick Viñales and Valentino Rossi, respectively, and Crutchlow was shuffled back to 13th.

Quartararo slumped to 14th in the race and eighth in the championship, while Rins held on to third in the standings despite finishing 15th on the day.

Mir was among the retirements with a technical problem, although he was already well outside the top 10 when he pitted.

The Spaniard had made contact with Zarco at Turn 3 on Lap 2, caught out when the pack checked up in what seemed to be a response to Rins, of all riders, running wide.

Mir also clattered into Francesco Bagnaia (Pramac Ducati) at the same spot a lap earlier, which saw the Italian wave the white flag due to shoulder soreness after a suspected dislocation.

Earlier in the afternoon, Remy Gardner won for the first time in Moto2.